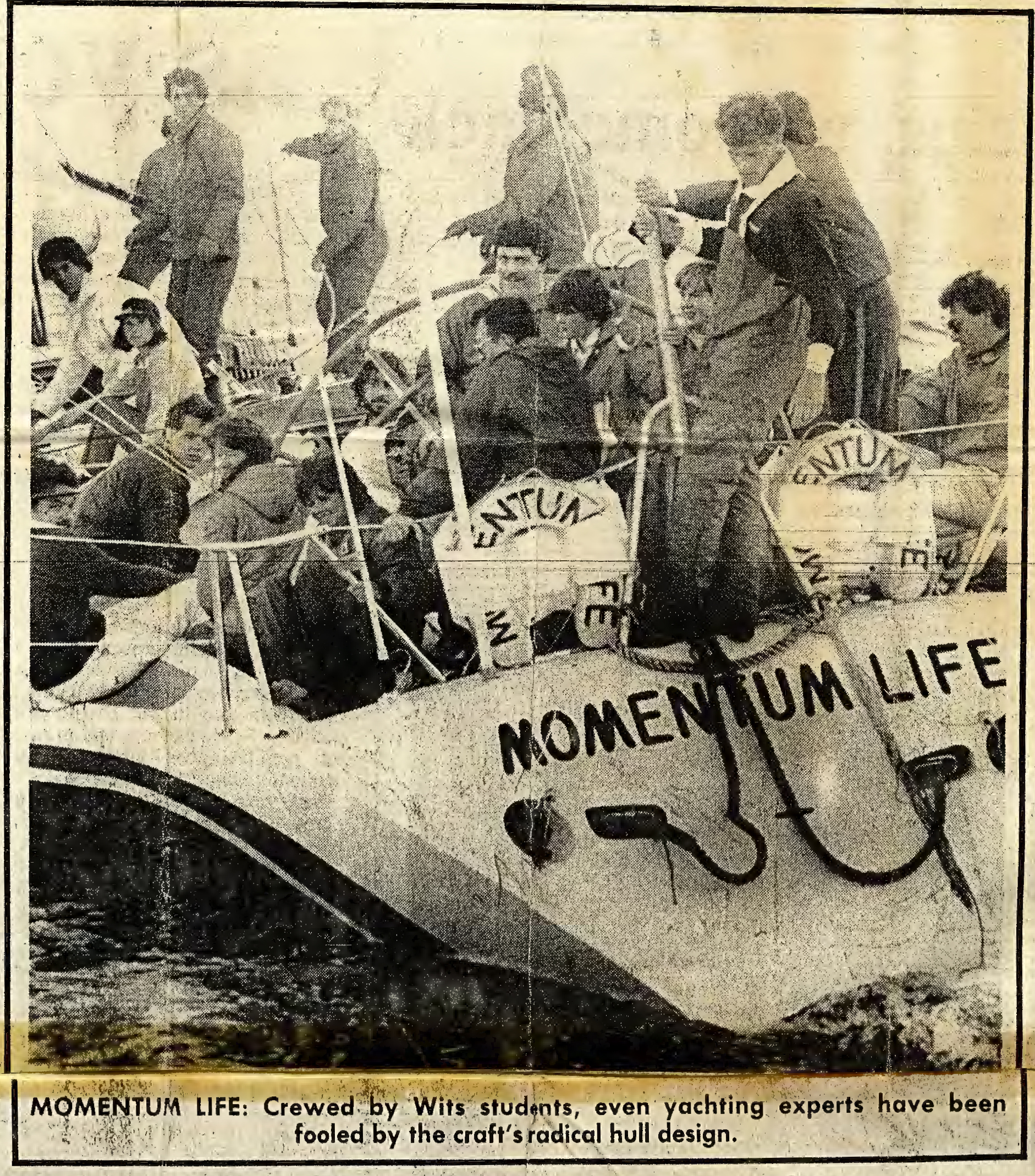 Sometimes a story finds you, demanding to be told, this was one such case.  In researching Touch Wood’s 1985 South Atlantic race results, I came across a photograph of a bunch of Wits students on a yacht named Momentum Life.  There seemed to be some issue with her hull design.  Intrigued, I dug further and stumbled across a fascinating story involving a controversial entry, a match race across the ocean and an unexpected winner. 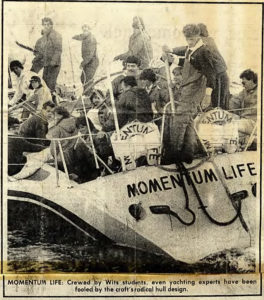 The favourite for line honours in the 1985 South Atlantic race to Punta del Este, Uruguay, was the largest, most sophisticated and potentially fastest yacht built in South Africa, the maxi Apple Macintosh.  Built by a Cape Town syndicate in a bid for line honours in the Whitbread around-the-world race, the 24.3m 30 ton yacht was crammed with sophisticated electronic equipment and crewed by a bunch of seasoned racing sailors.  Even though the South Atlantic race to Uruguay was merely a shakedown for the Whitbread, her goal was line honours in Punta de Este under skipper “Padda” Kuttel.

A dark horse in the race was the “controversial” maxi Momentum Life with her “radical” design techniques.  Built of space-age carbon fibre which had lessened her weight considerably, this 22m maxi had not yet been tested in tough ocean racing.  Momentum Life was to be crewed by Wits University students and skippered by Gerhard Aab.  In 1985 her design and the use of carbon fibre for her hull construction raised more than eyebrows and a full page article on the race in the Sunday Star of 13 January 1985 read: The floating eggshell – will Momentum Life really survive the Atlantic.

Journalist Peter Fabricius notes “mounting concern that the yacht is too thin and too light to survive the rigours of an Atlantic crossing”.  Designer Ernst van der Laan however, was convinced she would make it.   And it is here that our story takes on an interesting twist. You see Van der Laan would not be racing to Uruguay on his futuristic boat, instead he would be skippering an Angelo Lavranos designed one-tonner named Spirit of CIW II.  And in a further twist, Lavranos, one of the country’s top naval architects, backed up Van der Laan, stating that he believed there was no reason why Momentum Life should not make Uruguay. 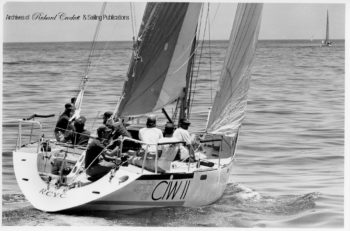 Van der Laan was vociferous in defending his design.  “It is ironic that in the one heavy weather race in Rothman’s Week, Momentum Life and Voortrekker II were the only yachts which finished.”  The misgivings and fears about her ability to withstand a battering in the Atlantic stemmed from her unorthodox design.  Where most hulls carried the loads exerted by both the rigging and the sea, Momentum Life had two separate structures.  Her rigging forces were absorbed by a space frame structure of aluminium tube spars, while her hull merely had to withstand the force of the sea.

Van der Laan explains: “When Gerhard Aab first investigated the possibility of using the boat for this race, they asked someone in the naval dockyard to assess her.  He said that the deck fittings would pull out because there were no backing plates inside the hull.  He had misunderstood the design concept completely.  He didn’t realise that the rigging was attached to the space-frame structure.”

Momentum Life’s hull was a 42mm sandwich with a balsa core and outer layers of carbon fibre and resin saturated wood. It certainly wasn’t the thinnest hull in the race, but its composition was unique.  Van der Laan even acknowledged that the boat had been built specifically for this type of race, in that she could run before relatively light trade winds.  “The hull has not been designed to take the buffeting of the Roaring Forties, for instance”, he explained.  “The margin of error in handling is very small.  The management of the boat will be crucial.  It’s not the sort of boat you step onto for an afternoon sail.”

The 1985 race was off to a bad start right from the beginning with three yachts forced to retire early on.  Archangel broke her mast near the Milnerton buoy and in rough seas off the West Coast, the maxi Wesbank was also dismasted, while Plumtree Sea Venture sprung a leak.  An almost complete blackout on positions, due to a faulty radio onboard the communications vessel Howard Davis did not improve matters, as the depleted fleet of 33 boats headed to Uruguay.

When positions finally started filtering through, the leading boat made headlines and it wasn’t Apple Macintosh!  Momentum Life grabs Atlantic Race lead reported the Eastern Province Herald on the 15th of January.  “The first position reports received last night since the start of the 1985 South Atlantic Race in Table Bay on Saturday, show that the Wits University crewed maxi Momentum Life, skippered by Gerhard Aab, has snatched the lead from the scratch boat, Apple Macintosh, skippered by “Padda” Kuttel of Cape Town.” 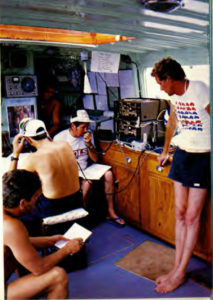 Little did these two boats know what lay ahead for them, for the 1985 race was extraordinary in more ways than Momentum Life’s hull design.  Apple Macintosh crew member, Ludde Ingvall, kept a fascinating diary of events as they unfolded.

“We had a very interesting night in that we were criss-crossing with Momentum for most of the time.  These were her conditions – heavy broad reach with short swell”, Ingvall recorded mere days after the start.  It was to be the start of the most extraordinary match race across 4500 miles of the South Atlantic Ocean. At times Apple Macintosh and Momentum Life were only a mile apart.  This necessitated hard, tactical sailing, with Ingvall mentioning that during a morning watch, the crew on Apple Macintosh went through eight sail changes!

Wind direction is approximately south-east 16-19 knots and we had a good run of 226 miles, but are still lying second behind Momentum Life who have just put themselves 5 miles ahead of us.

Momentum Life is still in sight with her position given as 10miles astern.  We have seen her for the past three days.  This is an offshore match race.  However, a very frustrating one.  We seem to sail faster during the day, but by the morning, we sail up to the front of the system, the wind drops, and we wait till Momentum Life is in sight.  Then we go again. Momentum Life is fast and she is being sailed very well, which makes it all quite fun.

This morning we have run out of wind at the front of the system again. In the darkness we could see Momentum Life catching up.  We just sat there waiting until she sailed up to about 2-3 miles astern of us, another day like those before.   As soon as she caught us up we got the breeze as well and off we went. I suppose it’s good for their morale, sure as hell it’s not very good for ours.  We never expected to be so close so far from Cape Town, but well, that’s life.

We have to beat Momentum Life by two hours at the finish and at the moment we have an hour and a half on them.  They are sailing damn well – sure as hell giving us a run for our money and I think Ernst van der Laan designed a good boat for this race.  I think a lot of people back home are going to be surprised at what is going on here.

Anyway the general positions are that on actual we are first, Momentum Life is second, Paper Pack Voortrekker is still in third position.  The rest of the positions aren’t all that interesting except that CIW II is doing exceptionally well and is the leader on handicap.

We still hope to get there by Friday evening, but unfortunately Momentum Life took about 5 miles out of us.  We are now leading them by about 7 miles to Punta del Este.  The close racing with Momentum Life is starting to show.  Some of the crew are getting a bit irritable.  However, we are in the lead.

Momentum Life’s daily run was about 90 miles and, as a result of that, we are leading by 80 miles. For CIW II we give her about six and a half days.  That’s where the tricky part comes in, that after we finish there is nothing we can do.  She’ll just go as she goes, and we’ll just sit in the pub and count the hours, minutes and seconds till she arrives.

“We have just crossed the finish line at 16h01 local time!  Not only did we have the reception of a life-time for line honours, but we also broke the race record by just under two hours.”

Sadly though, for Apple Macintosh it wasn’t enough.  Ernst van der Laan steered Spirit of CIW II to the overall victory on handicap by a mere three hours and a comfortable win in Class 2.  And the “floating eggshell”?  She finished second in Class 1, 28 hours behind Apple Macintosh and third overall on handicap.  Not bad for a boat that was a radical design, with a paper thin hull, that could never reach Uruguay! To celebrate Mandela Day on the 18th of July, the RCYC and RCYC Sailing Academy…