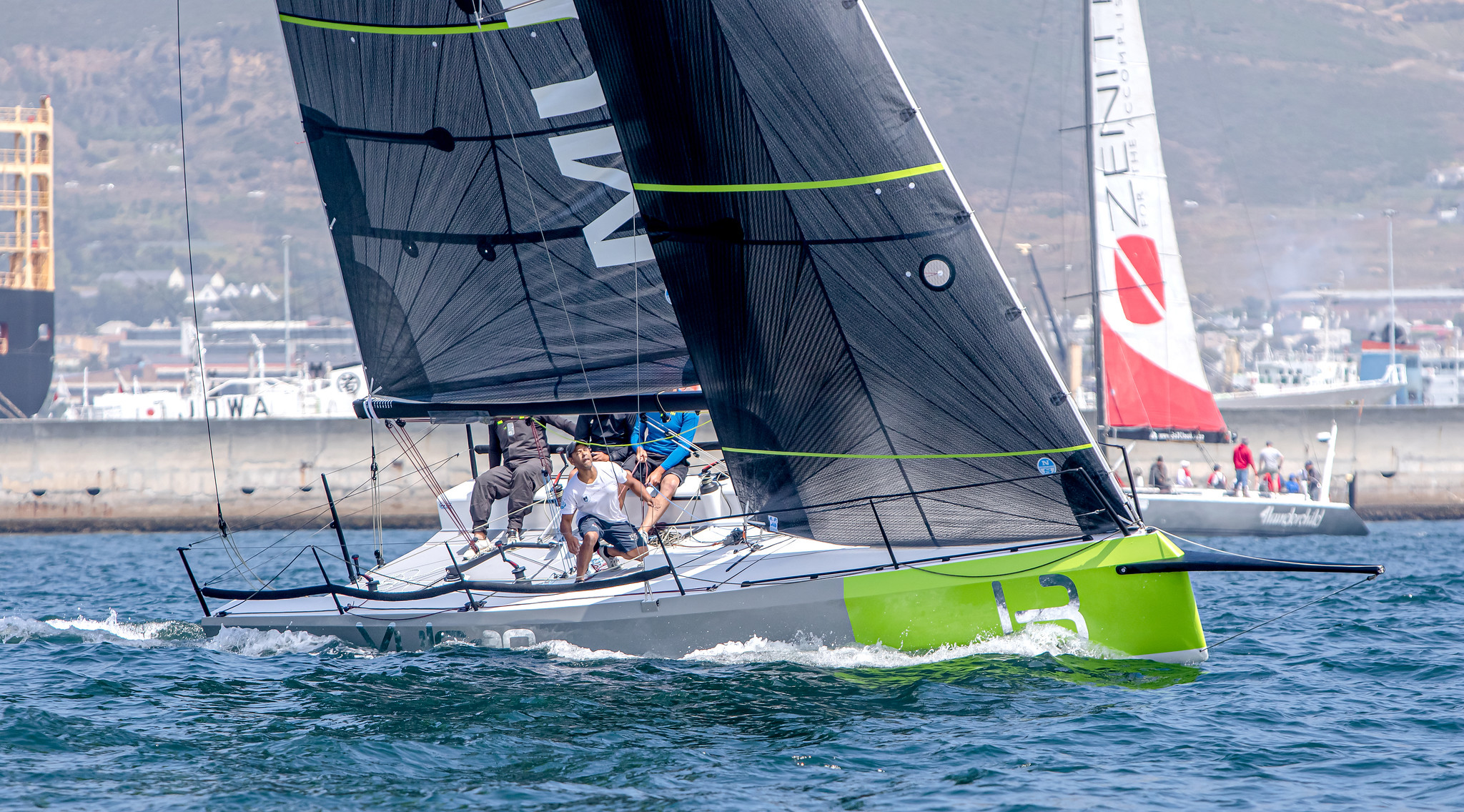 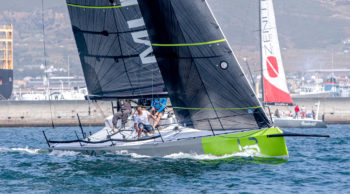 It is our pleasure to introduce the 2021 Lipton Challenge Cup team members. Team Vulcan is no stranger to Table Bay and RCYC, our team was originally founded in 2007 when we purchased a Pacer 42 named Unleashed. Our team principle and motto was to encourage youth participation, run a professional campaign and to have fun while we achieving our goals. Long-time friend Johnny Cullum and I, decided to take the team to the next level by acquiring a GP42 which we named Vulcan. The GP was an ex Audi Med Cup boat and along with our enthusiastic team mates she soon showed her worth, by winning the IRC Nationals on two occasions, The Mykonos Offshore and many other inshore and offshore events. After successfully finishing 3rd overall and being the first SA and RCYC boat for the 2017 Cape to Rio, we sold Vulcan and entered the world of Cape 31s.

Hylton and his team hold three SA yacht racing titles and have won numerous offshore and inshore regattas, including two times Mykonos Offshore Champions. Hylton started his sailing on Hobie Cats where he competed at five World Championships and numerous National and provincial championships. Hylton has received National and Provincial Colours for his achievements in sailing and was named “RCYC’s sailor of the year” in 2012. On the International circuit, since 2011 Hylton has been part of the Highland Fling program, a team that has won the Maxi World Championships on three occasions and is the current Maxi World Cup holders.  In addition to his sailing, Hylton has served as Rear Commodore Sailing RCYC, councillor with SA Sailing and currently sits on the Oceanic and Offshore Committee of World Sailing. Other keelboat International regattas include the annual Superyacht Cup Palma, New York Yacht Club’s Rolex Commodores Cup (Representing RCYC), RORC’s Rolex Commodores Cup, Loro Piana Superyacht Regattas and The Americas Cup Superyacht Regatta (Bermuda).

Colin is a seasoned Hobie Cat and Keelboat campaigner, besides his achievements as an ex Hobie Cat World Champion as well as numerous South African titles, he was part of the original “Puma Unleashed” campaign. In addition, he was awarded the “South African Presidents Sports Award” for all his sporting achievements in sailing. Colin was also part of Royal Cape Yacht Club’s team at the Rolex Commodores Invitational Cup in New York and was part of Vulcan’s success with three IRC titles as well as a podium finish in the 2017 Cape to Rio. Colin has sailed against and with Hylton since the early nineties and has been part of Team Vulcan since the launch of the GP42 in 2012.

Andrea is a 11 x national champion in various classes. On the International level, Andrea along with key members of Team Vulcan won Manhattan Yacht Club’s Dennis Conner international invitational sailed out of New York. Other International events, include a silver medal at the J22 world championships with a youth Helm.

He has participated in the Kings Cup, Australian Farr40’s state titles, Hamilton Island Race Week and numerous other international events.

Andrea is passionate about the sport of sailing and has been involved in both competing and Coaching.   He was voted SA’s most Successful Optimist coach in recent times as well as being involved in The Irish, Australian and SA youth coaching programs.

He co- founded the NPO SailPro which was a hugely successful sailing program aimed at promoting the sport to the youth. Andrea was also a founding member of SA Sailing’s Grand Slam series, which became one of the most important dinghy sailing circuits in South Africa. Andrea is a seasoned Lipton Cup campaigner finishing 2nd in 2017.

Carl has sailed with the team since 2006 with Puma Unleased and continued with our GP 42 campaign up until the 2017 Cape to Rio, where he was one of the team members on Vulcan to finish 3rd overall and break the South Atlantic record for a SA registered monohull. Carl has also been part of the team for all three IRC National titles as well as other successful regattas. Carl was also part of the team representing RCYC at the New York Yacht Club’s Rolex Invitational sailed on Swan42s. Not only does Carl bring a wealth of experience in yacht racing, he also brings extensive engineering resourcefulness into the team.

Ryan started sailing at age 13 on Optimists and Dabchicks and soon moved onto keelboats, starting as a bowman before slowly working his way to the back on the boat. Ryan’s easy adaption has allowed him to fulfil any roll on a keelboat from pit to trimming. He now finds himself running the crew as Vulcan’s crew boss, responsible for coordinating all manoeuvres when racing. His first foray into the Lipton Cup world was in 1997 at the age of 15 and has since competed in about 20 Lipton Cups since. He has on more than a few occasions found himself with a team finishing in second place and is still chasing that elusive Lipton Cup title. He has however achieved victory at many national championships over the years, including 505s, Fireballs, Sonnets and J22s. Ryan’s passion for the yachting world has translated into his career where he worked as a sailmaker and quality control manager for two of the biggest brands in the industry. Today Ryan lives a life of leisure driving motor yachts in Cape Town, but it will always be sailing that remains his first love.

Chris brings a substantial amount of experience in big boat sailing which includes six Lipton Cup campaigns, with his best result being a 3rd place sailing for UCT Yacht Club in 2012. Chris grew up racing dinghies and yachts at Theewaterskloof and Royal Cape Yacht Club. Locally he crewed on Cape Fling for 5 years and Internationally has offshore experience having competed in a Cape to Rio, two Caribbean 600’s, the Fastnet and Middle Sea Races aboard Piet Vroon’s Tonnere and James Blakemore’s Music.

Peter has three Lipton Cup Challenges under his belt and is looking at improving on his previous teams’ 3rd place finish at the 2018 Lipton Cup Challenge, sailing on a L26. Building on his experience competing on the Cape 31 in the 2019 event, Peter also brings four years of experience as a bowman in the Cape 31 local circuit. Other achievements include two Cape to Rio campaigns and racing Hobie Cats on the Langebaan lagoon. His passion for the sport extends to his education, Peter has recently completed a Master’s degree in Atmospheric Science and along with his local knowledge of the weather in Langebaan will give the team some useful insight at this year’s exciting new venue.

Relatively new to the sport of yacht racing, Michelle has become a regular crew member on Team Vulcan. Her previous experience includes a stint on Saths Moodly’s Pacer Cape Dancer, where her passion for the sport was born.

Long standing crew member Cameron has sailed with various campaigns including Picasso (Sovereign 54), Puma Unleashed (Pacer 42), Vulcan (GP 42) and the Cape 31s, Mulilo and Vulcan. Cameron has been awarded National and Regional Colours and was part of the team winning 3 IRC National titles as well being part of the team winning two Mykonos Offshore regattas. Cameron has a Yachtmaster Off-shore and has completed many miles in and around the South African coast line.

Sailing Office News  Although, at the time of writing, we still do not have permission…