We slipped right back into boat life after our hiatus to the south of France.  All our kids were onboard waiting for us when we arrived and Nick had also brought Ila, his girlfriend along.  Matt was about to head back to Cape Town where he had some work to do and was looking forward to celebrating his birthday with his friends whom he had not seen for over two months. 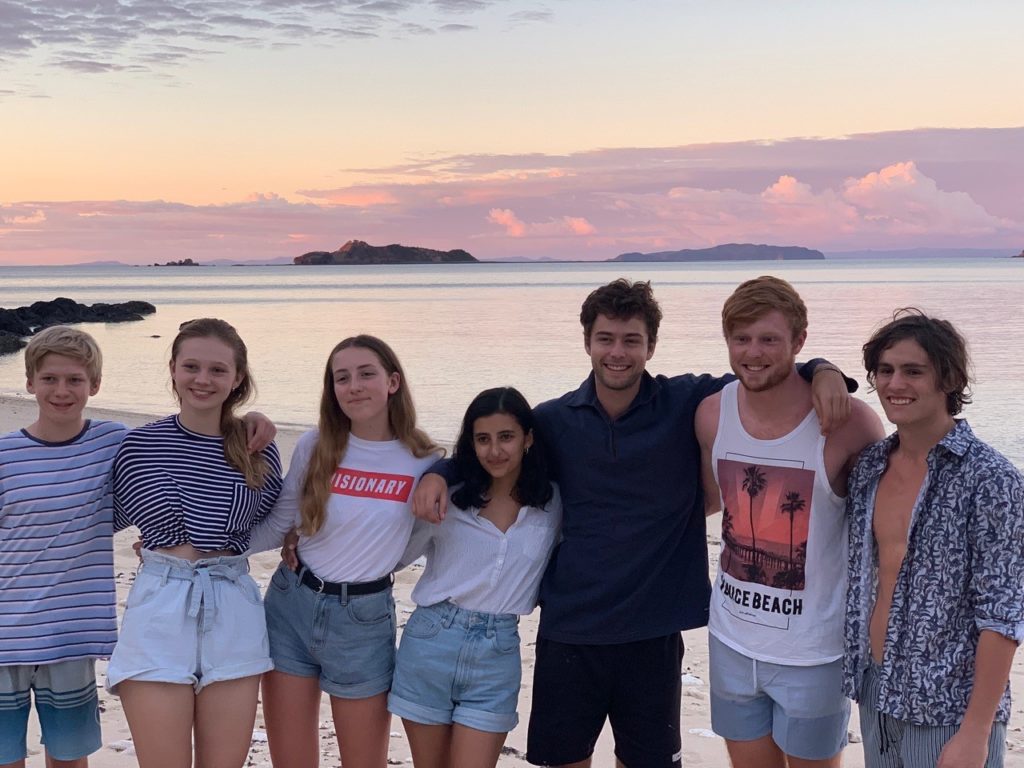 All the young adults on our trip! From L to R Jason, Megan, Rosie, Ila, Nick, Matt (Fields) and Neil

We had left Amarula on a mooring ball at Crater bay Marina and Matt was Captain in my absence.  Nick and Ila had flown in mid-week.  Running a vessel is no easy task, as you have to keep both managing and maintaining the systems to make sure you have enough resources.  We have a wind generator and solar on Amarula.  The systems are really designed for three people on board and all work perfectly when our tally matches, however most of our trip we were no less than five, putting these systems to task and requiring our frequent input.

To back up the wind and solar there is a 6 KVA generator on board.  Our battery monitoring system had taken a knock at some stage with a generator spike, so it was not all plug and play to manage resources.  You had to watch battery voltages and amp hours and make sure that current draw never exceeded resources.  This manual way of doing things was not really a drag, as I always believe in dedicated checking up on computers when they are in control.  We all know how Murphy loves a little action!

In addition to the 12 and 220volt requirements on the boat, there was also the matter of fresh water.  We have an amazing water maker on board, but Crater Bay Marina does not always have clean water as it sits alongside a mangrove swamp and village into which the tide ebbs and flows.  Watching your fresh water use is also very critical.  It was easy enough to replenish – just a short tender ride to the dinghy dock with a container to fill and return to Amarula.  We had a single 20 litre water container so you would have to make 20 trips (or buy more containers) to completely refill the tanks – all in 38 degrees heat and 100% humidity! 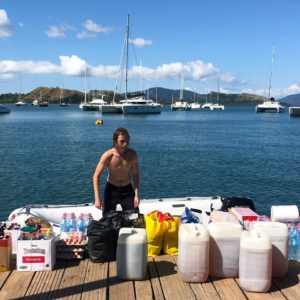 Matthew had done an excellent job of looking after Amarula and upon our return there was ample power available as well as fresh water for that all important shower.  Nick and Ila had rustled up a fantastic late lunch for us and once a cold THB (Three Horses Beer) was in my hands, the stress of the travel washed off and we were back where we belonged.

We spent another day on the mooring ball whilst we re-provisioned and met up with some friends from Cape Town who were joining us for a few days.  Amarula practically groaned as we untied the lines and headed out of Crater Bay with a full boat. We immediately headed North towards Sakatia and the turtles.

Abundant Life at anchor off John’s Beach on Nosy Sakatia

Sakatia is a beautiful island lying just off Nosy Be.  It is quite well populated and has a very popular tourist attraction on the southern beach.  The coral is protected in this area and is cordoned off.  Around the coral are the most spectacular undersea grasses, substantial lawns that extend underwater.  The water is not very deep here either and it is very easy to snorkel in and around the coral heads and grasses.  There are no currents and if you wait just long enough, you will be rewarded with seeing the most magnificent turtles as they feed on the grass.  Keeping a respectful distance does not seem to bother the turtles at all and you can follow them around for some time.  Occasionally one would get irritated with having his meal interrupted and with a few deft strokes would be out of sight quickly. 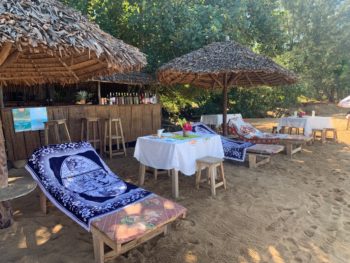 One of the quaint little local bars on the beach at Sakatia. Good value and excellent service

Over the next few days we wandered from island to island.  From Sakatia to Nosy Fahiny and its shelly beach.  Then further North to Tsarabanjina, Mitsio, Ankarea and finally Nosy Lava.  It was amazing sailing and blissfully uneventful perfectly sunny days.  Fish would bite when a line was thrown overboard, there were always coconuts to be harvested, anchorages were calm and peaceful, the holding good and the locals always happy to trade or barter.

Finally we turned and headed South again, towards Nosy Komba and the French Bistro Tamarin Komba which made the most amazing pizzas.  At Komba we did the Lemurs and the chocolate village where Stefano himself took us on a grand tour pointing out what has been accomplished there.  Apart from looking exactly like an Italian village based near Portofino on the Italian Riviera, what has been achieved there is incredible.  Stefano is a philanthropist of sorts and the self-proclaimed mayor.  He has made it his life’s challenge to give back.  There is a magnificent school and medical facility as well as a busy little village all locally empowered and working towards a sustainable existence using the crop of cocoa as a basis.

Finally we headed off to Tanikely and back to Crater bay to complete a circumnavigation of the islands with our guests.  Nick and Ila had to return to college and our guests were flying back to Cape Town.  We hired a car and got them all off to the airport and re-provisioned on the way back to Amarula. 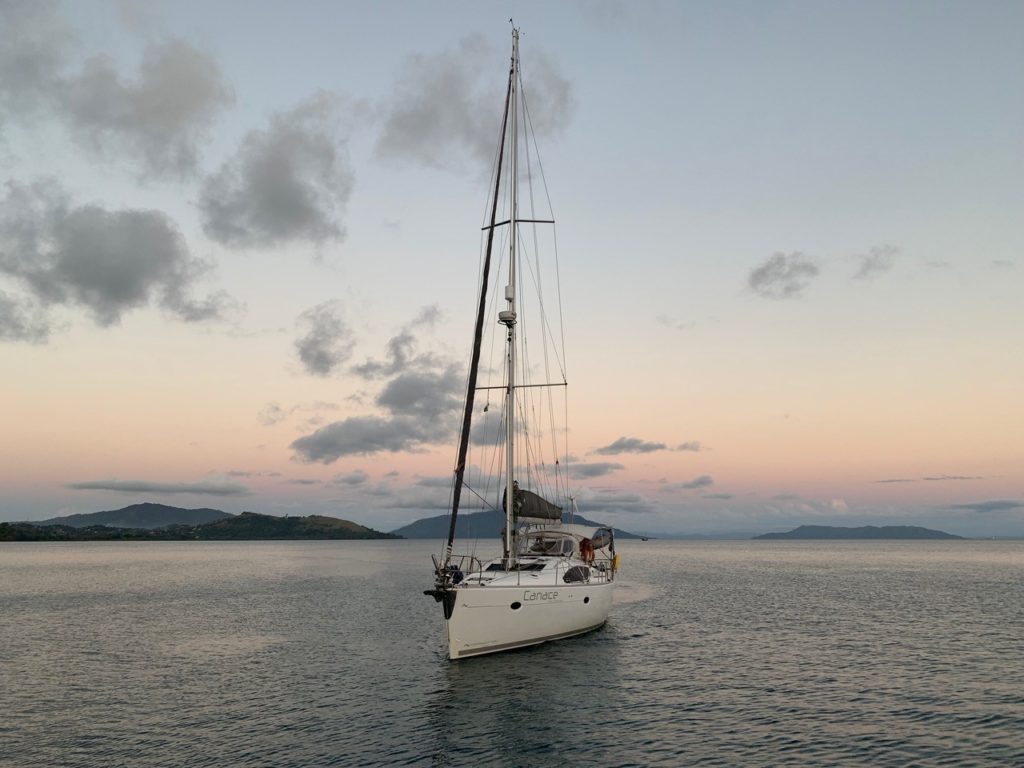 As we tied up on Amarula’s stern that evening it was finally just Rosie, Adéle and I.  We had thoroughly enjoyed having family and friends onboard, but it was hard work for all of us and stressful at times.  The boat had been busy, lots of mouths to feed and adventures to be arranged.  Plenty of cleaning and tidying up, many hands to help with anchoring and sailing, with cleaning the hull from the tropical growth and repairing whatever chose to break.  Different routines all forced into one tiny space like a bunch of surprise ingredients sprinkled into a traditional recipe with everyone hoping for the perfect outcome.  Cruising is not for the faint of heart!

I popped open a bottle of Bubbly I had been saving for the girls, perfectly chilled and poured it into two glass flutes I had frosted in the freezer.  Pulling out a fresh THB (Three Horses Beer) for myself we all moved onto the trampoline to watch the sunset.  We sat in stillness, the sounds of the village streaming down into the Bay and wandering amongst the yachts until it found our ears.  It was somehow comforting, knowing that there was life nearby, the sound of families sitting down to dinner, a blown speaker somewhere fuzzing out a melody, children laughing, tuk-tuks constantly running and hooting at each other, more in greeting than in anger.

Adéle, Rosie and I finally alone

Someone was still working on his dhow in the boatyard nearby, you could hear the knock of wood as he prepped for departure at first light. A tender was put-putting somewhere off to starboard and I could hear the distant clink of glasses from the Marina Bar as the sun slowly licked the horizon and then just melted into it like a massive pink marshmallow falling into the campfire.

Finally we were alone and without plans.

Wednesday 06th February 2019  This evenings race has been cancelled due to strong winds forecast.  …