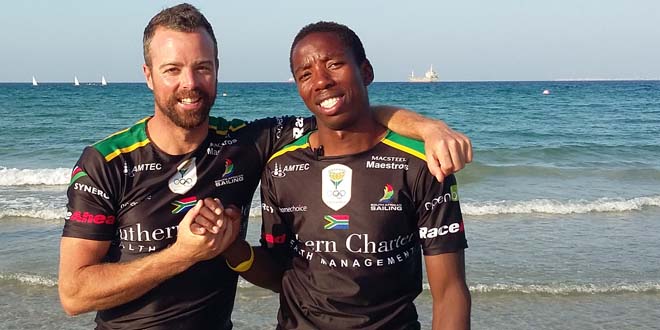 Race to Rio, by Lindani Mchunu

The Royal Cape Yacht Club Sailing Academy was formally established in 2012. The motivating factor was removing the barriers to entry for marginalised communities in our sport and ease of access to the waters of Table Bay. The members of the Yacht Club recognised the inequities that underlie almost every facet of our society and were inspired to do something about it with regards to our sport.

This decision, similar projects initiated around the country in the past, and the establishment of a link between Royal Cape Yacht Club and the Jewish Maritime league, paved the way to the formation of a relationship with the Law Hill Maritime School in Simons Town. They initiated a course in maritime studies, employed Ian Ainslie fresh from the 1996 Olympic Games to be one of their school teachers and head of sailing.

This would see the Isivunguvungu Sailing Academy established with the Support of MSC. The Sailing Academy in Simons Town would give birth to the 2007 Shoshololoza America’s Cup campaign which saw the first entry from an African country in the most prestigious sailing event in the world, the America’s Cup.  This would inspire a young Asenathi Jim to go on to be the first and so far only black South African sailing Olympian, taking part in the 2012 London and 2016 Olympics in Rio. 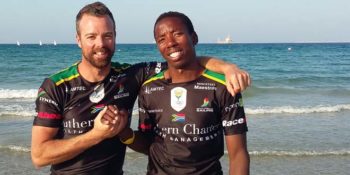 “From Isivunguvungu to the Olympics, it all snowballed and I believe it was because opportunities were created for young, black and coloured sailors to thrive and compete at the highest level of our sport. The most important by-product of the intervention was how it inspired the younger generation,” explained RCYC Academy Manager Lindani Mchunu.

“If Asenathi Jim, the two-time Olympian, had not gone to Spain in July 2006 for the practice rounds, to see people who looked like him compete at the highest level of the sport he was involved in, to see Golden Mgedeza as bow man on an America’s Cup boat, I doubt he would have had the motivation to go to the Olympics.

“France is a great sailing nation. One of the reasons for that, if not the main reason, is because of grass-roots programmes across the country and the encouragement of participation in multiple shorthanded events across their calendar that develop a pathway to the Vendée Globe. Heroes are born out of this extraordinary single-handed sailing race around the world. Little boys and girls get to cheer their heroes on and most importantly get to believe that they too someday can be the next Vendée champion.  If a fellow Frenchman who looks like me can do it then I can too.

If you peel back the pages to the history of South African sailing, you will find legends like John Martin and Bertie Reed. Men who set sail in search of glory and came back to tell the tale. Due to our rather regrettable past, our sport does not have a past representative of the diversity of our nation,” added Mchunu.

“This year of 2021 marks the 50th anniversary of the Cape to Rio Yacht Race. What will the next 50 years look like is the critical question. Will our sport create new heroes and legends and will they be as diverse as our Rainbow Nation? I believe if you ask the question then you have a responsibility to answer it.

My answer to that question is that the Royal Cape Yacht Club Sailing Academy is going to Rio in 2023. Following in the footsteps of the team that made the journey in 2000 on board a boat that was sponsored by MTN, it is going with a team that seeks to create the future we want to live in, and intentionally shape the next 50 years of our sport.

“In the past year of 2020 we spent most of the year trying to save our Academy. With most of our funding coming from donations and government funding we were not going to go through the year unscathed. As a result we had to let go of a few learners and maybe we might let go of a few more.

“I don’t want my young sailors to believe this is the end of the road, nothing could be further from the truth. I couldn’t find anything more inspiring than to sail across the Atlantic from one continent to the other, to sail from one iconic city to another. I want my youth to know the only limitation is your imagination, but I am aware you can only imagine as far as your exposure.

“So we are going to Rio because we want to expand the mind of the black child, we want to shift the very barriers that land has imposed on the black child, a child that measures their dreams by their circumstances and lived experience. Most importantly we want to create heroes for those that need a reminder that it is possible. Black youth claim your stake on the open seas and find your place. Most importantly we want to inscribe a black name on the prestigious “South Atlantic Trophy” for the very first time.

“This is not a task I will be able to achieve alone. I will need all the help I can get. As a result this entry is for all of us that want to believe that in the midst of darkness and despair, hope thrives through the efforts of a few. Sometimes hope can be a crew of 8 to 10 young South Africans, on a sailboat trying to make history and saying: ‘We are going to Rio de Janeiro.’

Mike Robinson, President from SA Sailing added: “At SA Sailing one of our main priorities is to promote the sport and all it has to offer to absolutely everybody in the country. With several development programmes and initiatives already in place around South Africa, we believe that every South African, particularly those who haven’t previously had access, should be able to try out and enjoy the sport. It is because of this approach that we fully support what RCYC’s academy are doing in inspiring the next generation of South African sailors. It is truly inspiring to witness the work that they are doing and we look forward to following their team all the way from Cape Town to Rio in 2023.” 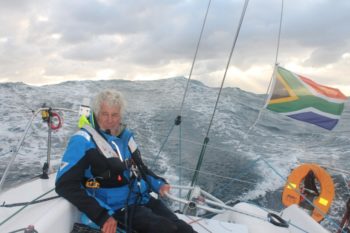 The yacht chosen by the Team for Rio2023 is one of South Africa’s finest. Designed and built in SA.

Built by Robertson and Caine, the master builders in Cape Town, now the 2nd largest leisure catamaran builder in the world, she was launched as ORION EXPRESS, with sail number SA4444. Designed by Alex Simonis she is a bullet proof, strong carbon and epoxy racing machine. She raced all over the world setting high standards and winning races from Vietnam to the Mediterranean. Next owner renamed her GUMPTION. Rio races and local wins, she is considered the fastest yacht on a reaching point of sail in South Africa to this day. The boat was then bought by the Hout Bay Youth Sailing Development Trust and renamed GRYPHON. The Trusts aims are to use the boat as an enabler to enhance and upskill young sailors in SA and boost transformation in this challenging sport.

Rio race veteran, co-owner of GRYPHON and current SABBEX chairman, Bruce Tedder will be Team Manager for the Rio 2023 campaign. ‘’We are stoked to be part of this exciting campaign and will do all we can to get the Team onto the start line with race winning capacity’’.

‘’SABBEX and Boating SA have a clear goal of ‘’growing leisure boating in SA’’. To grow the sport we need to reach out and touch a much larger audience and then give them their own sailing hero’s to look up to. This Rio 2023 campaign will do just that and more’’.

What a great Day on the water! Todays weather was the "Bread & Butter of…