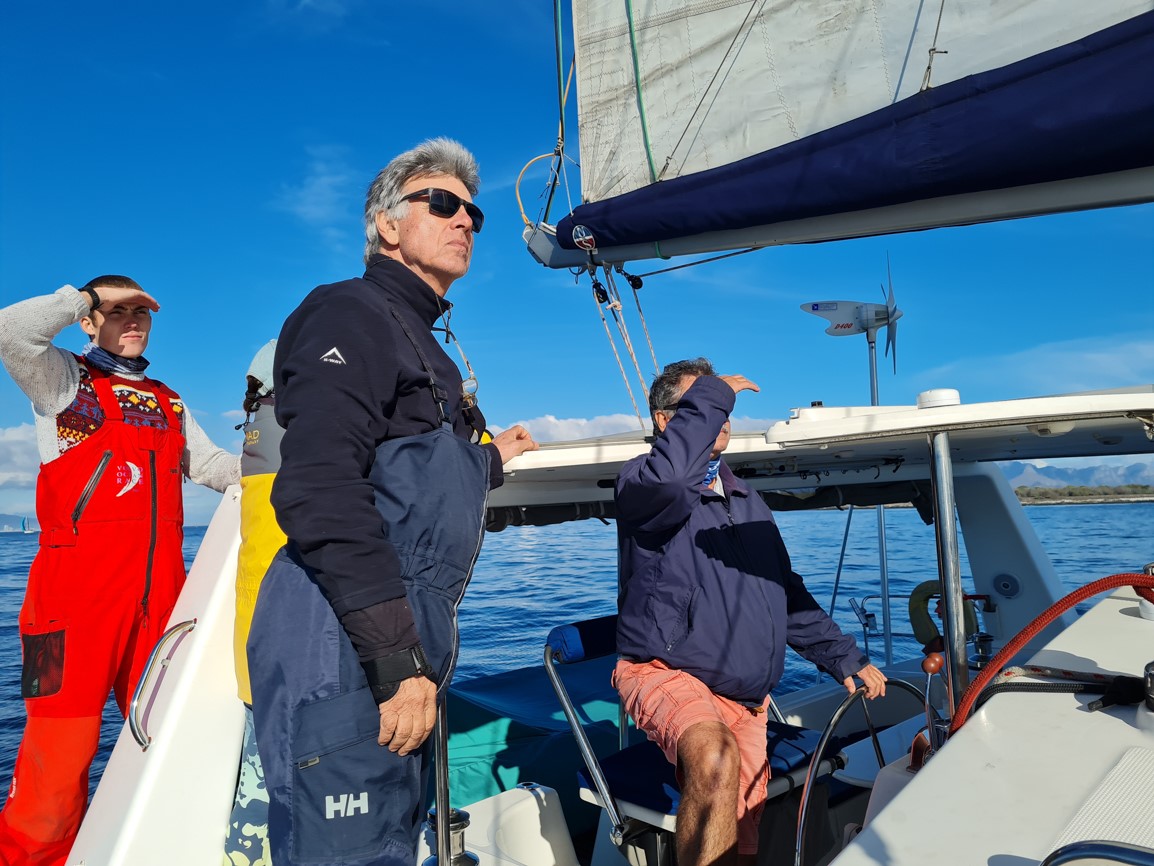 Whiteout and a perfect race, by Liesl King. 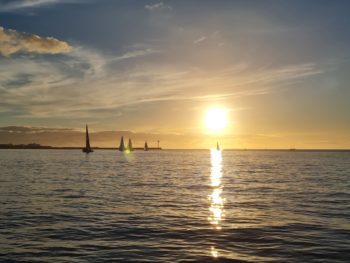 If you had asked me two weeks ago whether there is such a thing as a perfect race, I would have said emphatically no! Granted as a rookie sailor my experiences are limited, but somehow whether it be racing on my Cape 31 lesson boat, on my sturdy Rolls Royce or even on my latest adventure, the Cat, something inevitably does not go according to plan. Bad starts, no wind, too much wind, bits and pieces that break, instruments that object to getting wet and cease to function, the list is endless.

There may not be such a thing as a perfect race but racing in general is pretty cool. I love the adrenalin on the start line, the jousting and “friendly” banter, the count down to the very last second, the charge up to the first mark and in a Cat the ‘will we or wont we make it without tacking’. The concentration onboard, the energy and precision required when tacking or gybing in strong winds and the final stretch to the finish line. And if you happen to be close to Amarula when we finish, you will undoubtedly have heard our celebration song The Ride of the Valkyries. Yep we love a race well sailed and crossing that line, we celebrate in style!

Hence when the message “Anyone up for the pursuit race this Saturday around Robben Island” flashed onto my screen, I was the first to respond. A long race around the Island, bliss. Then as the day wore on, I started thinking back to the last time I raced around the Island. It was long, frustrating and with the wind varying from zero to a howling southeaster, extremely tricky. I learnt the hard way just what the Mountain wind shadow was, and how demoralising it can be when it causes a parking lot to appear in various parts of the bay. That race was on a Cape 31 and now I was going to be doing it on a Cat. Only time would tell.

Of course it didn’t help when the weather report was as confused about the race as I was. Windfinder’s two models usually only differ in wind strength, this time though the one predicted a southerly, while the other predicted a westerly. The only thing they agreed on was that it was going to be light. Oh dear! I truly love racing on the Cat, but I have discovered that while Cats can beat, it is bloody hard work. Tacking back and forth without the benefit of your yacht heeling obligingly from side to side is not easy. And the more you do it, the harder it becomes to pull in that giant genoa of ours.

I have only sailed one race on the Cat, where due to an unexpected wind change, the course required us to beat to Clifton and back and by the time we rounded the mark I was dead, or rather my arms were. The starboard winch having all but defeated me. To this day I still thank the wind gods for dropping the wind to such a degree that we goose-winged all the way home. I am not sure I would have survived otherwise. A southerly round Robben Island? No, no and no again!

The day dawned and driving in, I spied an ominous fog blanket lying down below over the harbour. That would just be the cherry on the top of my already wobbly cake. Navigating in thick fog, on endless lookout for other boats while beating around the island. Just exactly what the wind was, remained a mystery. Out we went and straight into the thickest fog I have seen in a long time. The term white-out refers to blizzard conditions when contours and landmarks become indistinguishable as everything is a uniform white.  As fog go, this was a white-out.

Sailing up and down became an extraordinary experience. Noise is amplified in thick fog and noises we never hear out in the bay, suddenly sounded right next to our boat. Men shouting, cranes creaking, the sounds of a working harbour suggested we were within touching distance of the wall. When an alarm suddenly sounded, skipper shot up from the cabin, only to be reassured that it was in fact coming from the harbour and not Amarula. Motoring very carefully we inched up and down, waiting. Would the race start, would the fog lift or would the race committee abandon.

An hour postponement was announced. The Port controller had decreed that visibility was too bad to allow the remaining boats to head out to the Bay. With nothing to do but wait, skipper fired up the cappuccino machine. May I just add that there are distinct benefits to racing on a Cat? Hot coffee being the first and foremost, with the availability of a toilet a close second, especially if you are a lady.

Finally the fog lifted enough for the Port controller to relent, the rest of the fleet emerged, and the race started. We were starting about mid fleet and hence were impatiently waiting our turn, seeing as we had been out there for quite some time. Finally it came. The wind appeared to be westerly and with three minutes to go, we slowly sailed for the pin. The plan was to hit the pin spot on, perform the perfect tack and be on our way. 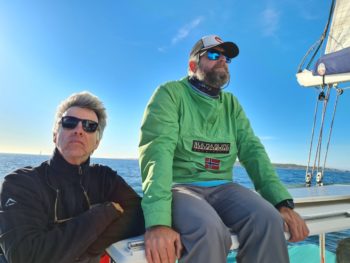 Here I do need to explain that there seems to be an age old duel between Amarula and Derbigum. Its origins appear to be long buried in the mist of time, but the unwritten rule seems to be that neither can allow the other to best it to the line.  So in a fleet of 55 boats, who would we be sharing our start time with? Derbigum of course. Normally we only start worrying about where Derbigum was mid race, now it was going to be game on from the word go.

Our start was picture perfect in the light wind.  With both boats heading down on the pin simultaneously, there was some “friendly” shouting, something to do with the weather boat having to keep clear, which resulted in us pinging the pin, executing a great tack and leaving Derbigum to port. There was just one small problem, we had to tack again to start the up leg of our anticlockwise race around the Island and in our way was a small boat that had started behind us. Derbigum off to port had room to manoeuvre. They tacked and were on their way, while we were still waiting for the small boat to tack, thus allowing us room to manoeuvre our rather substantial bulk in the direction of the Island.

It was the last we saw of Derbigum for a very long time. Despite that though the westerly meant that we had the wind on our beam and a reach all the way to the Island. The perfect sailing wind for a race around the Island. On a port tack, all I was required to do was trim the genoa as we race up to Robben Island. Off to our left appeared a parking lot, filled with some of the smaller boats that had started before us. The dreaded wind shadow had gobbled them up. Amarula though had plenty of wind and it didn’t take us long to reach the rocky shores of the Island.

Up front we spotted Derbigum for the first time. The gap was closing but not for long. Once around, she found a favourable wind and shot off into the far distance. The mood on board was decidedly glum. It looked like we would be beaten by a country mile or two. This would not go down well in the pub afterwards. Should we skip the pub and just go home? Decisions, decisions! Still there was a race to be sailed and the dreaded wind shadow lay ahead. Concentration was required. 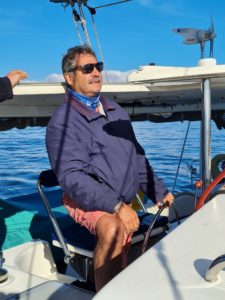 Here I have to enlighten you as to precisely who we had on our helm, none other than past Commodore Vitor Medina. And Vitor is a wind whisperer. There is simply no other explanation for it. Pockets of dead wind appeared, boats got becalmed, some even retired and yet we sailed onwards without hitting a single one. Amarula, for all her bulk, kept on floating forwards even in three knots, forever dispelling the rumour that cats cannot sail in light winds. Onwards we went, mile by mile steadily going by. We were never going to catch Derbigum, but we were going to finish.

The harbour loomed and with it the announcement that a container ship was exiting, and all yachts had to keep clear. Thankfully we were well clear, Vitor having steered a course through the calm spots that would take us straight to the pin. High enough to avoid the container ship. Others were not so lucky. And one of those was Derbigum. Approaching on a line closer to shore, she was forced to duck around the stern of the ship and on popping out on the other side, she found herself in a windless hole. Fate is a cruel mistress and Derbigum could only watch as we sailed towards the line.

I seem to recall that we offered a tow.  But of course that is not allowed under racing rules and hence we regrettably had to leave them behind. The line loomed, the Ride of the Valkyries boomed out across the water and we celebrated sailing the impossible, the perfect race. Yes, the perfect race does exist. It doesn’t happen often, but when it does, when everything comes together exactly as it should, there is absolutely nothing like it. 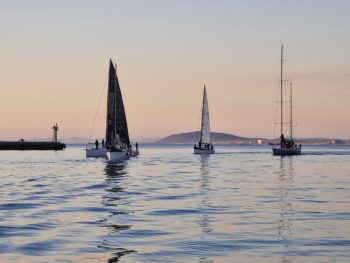 There will be NO Twilight Sailing this evening.  Currently we have SSE 32knts gusting 42knts.…

Building Experience and Building Relationships...! Stop. Rewind 5 years. 2009. That is the last time…

Last Friday night’s lucky winner was Mr Clive Noland, who was unfortunately not present to claim…