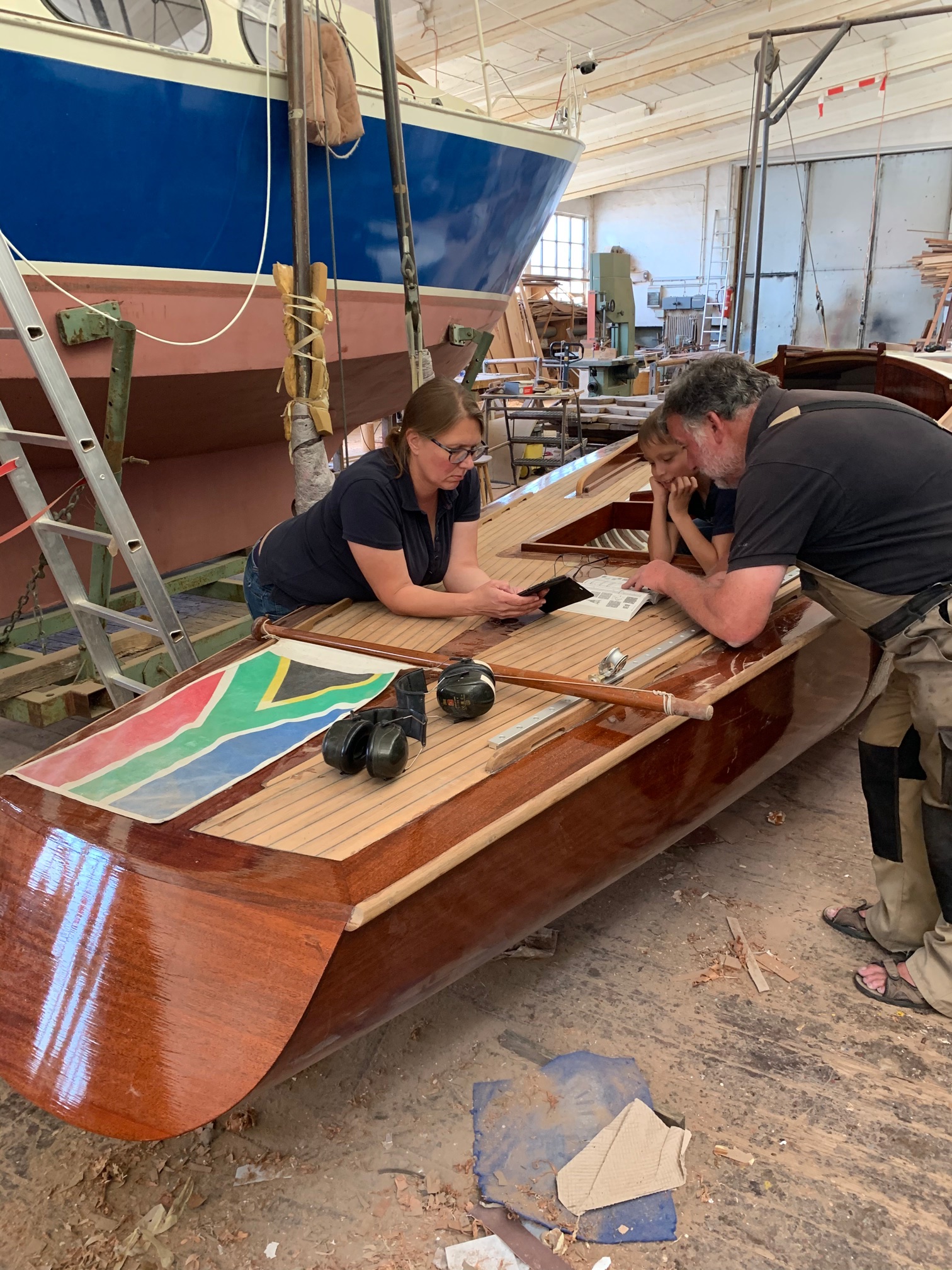 The 30 Squares – Mariquita by Liesl King

“I wonder if you can possibly conceive the grandeur of a 30 Square sailing out at sea off Durban in a quiet light southerly wind [Force 2] in the remains of huge swells after a big sou’westerly.  Where she climbs effortlessly over these vast swells without a single sound, except a quiet flap of the genoa luff at the summit of each huge swell, before you pull off ever so slightly and the jib fills completely.  Silent power – awe-inspiring”  – Dr Hamish Campbell, Official Measurer  and owner of Hjalmaren.

For 22 years during the Designer-Rule era, the 30 Squares were the Lipton Challenge Cup boat, where the best design within the rules often dominated.  While up to thirteen boats contested the Lipton Cup, none were more successful than Mariquita.  Designed by Swede Arvid Laurin, Mariquita was the only boat built for a South African customer and sported the sail number SA1.  Built to withstand the extreme climatic conditions of Scandinavia, Mariquita  was planked up in Honduras mahogany on a steam-bent American or European white oak frame with an Oregon pine deck. Top quality timber, which was well seasoned prior to use, was essential for the close-seamed hulls of the 30 Squares. 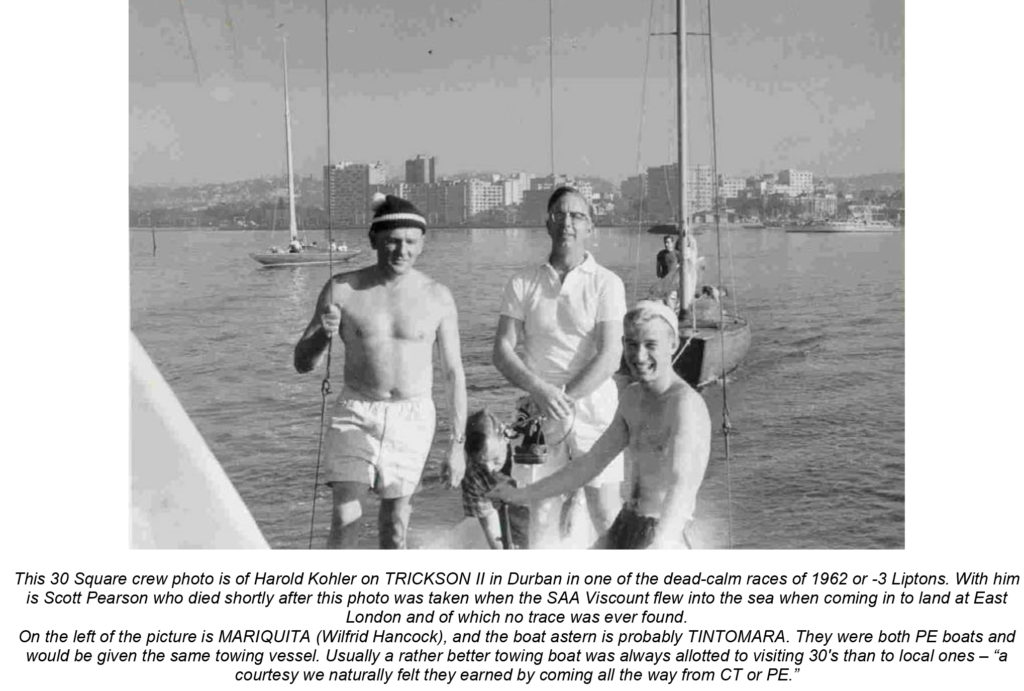 The story goes that prominent sailor and businessman Wilfrid Hancock of the Royal Natal Yacht Club, was so impressed with the performance of the Laurin designed Trickson II that Harold Kohler sailed to victory in Cape Town, that he commissioned Laurin to design a boat for him. Mariquita skippered by Hancock and Rapid skippered by Noel Horsfield dominated proceedings from 1959 till 1966, with Rapid winning three races to Mariquita’s five. 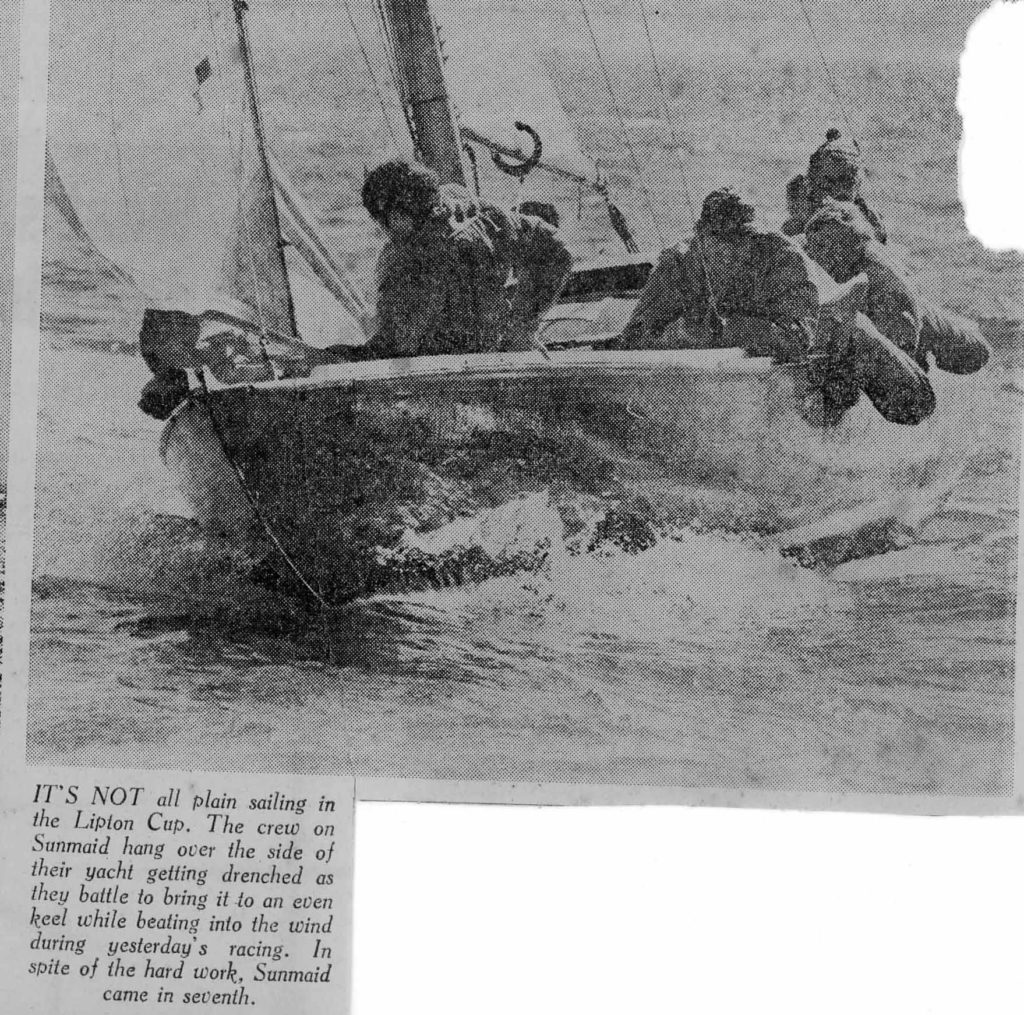 The 30 Squares were known to be very wet boats. Hence the Lipton regattas were held at the quietest time of the year, May and June, with 70% of the races apparently sailed in less than 10 knots.  1958 saw the ill-fated ‘shambles of Port Elizabeth’, when a Southwesterly buster clobbered all the boats, according to Campbell.  Hjalmaren, newly imported, was ill equipped for such conditions. Her bowman telling Campbell that “it went from 0 to over 60 knots in 10 minutes. It blew out 3 jibs and then the mainsail. We were hammering towards Madagascar under bare-poles faster than the Port Elizabeth harbour tug, that was trying to catch up with us to tow us in!”  Her owner never sailed her again and Campbell managed to buy Hjalmaren for a tenth of the £7000 she had cost to import one year earlier. 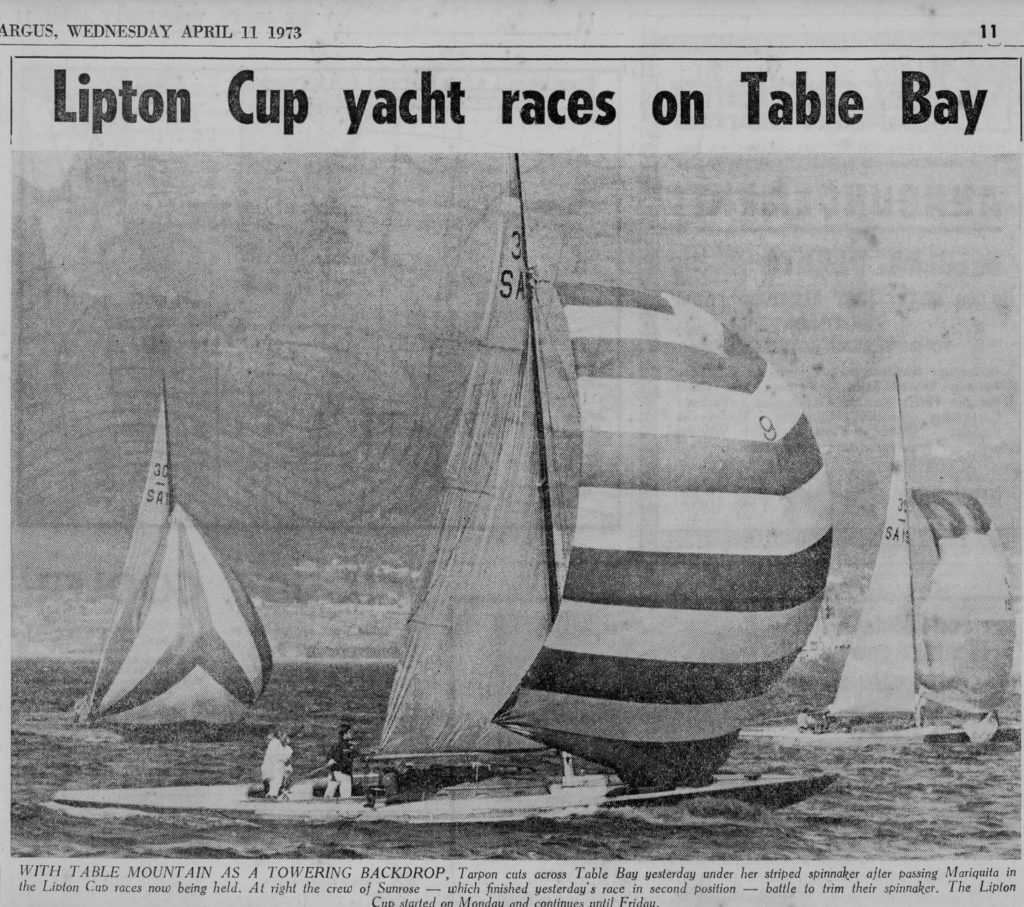 Campbell remembers that Hancock, skippering Sunmaid, faired only marginally better. “Wilfrid sailed with his mainsail twice rolled, with his roller reefing, and a double gauge storm-jib. With this rig, he managed to pull the metal frames holding his mast shrouds away from the hull and the rivets holding the planks on to them. This left the crew with the job of stuffing the holes with insulating tape to stop jets of water pouring in!”  She finished first but needed extensive repairs before she could race again. 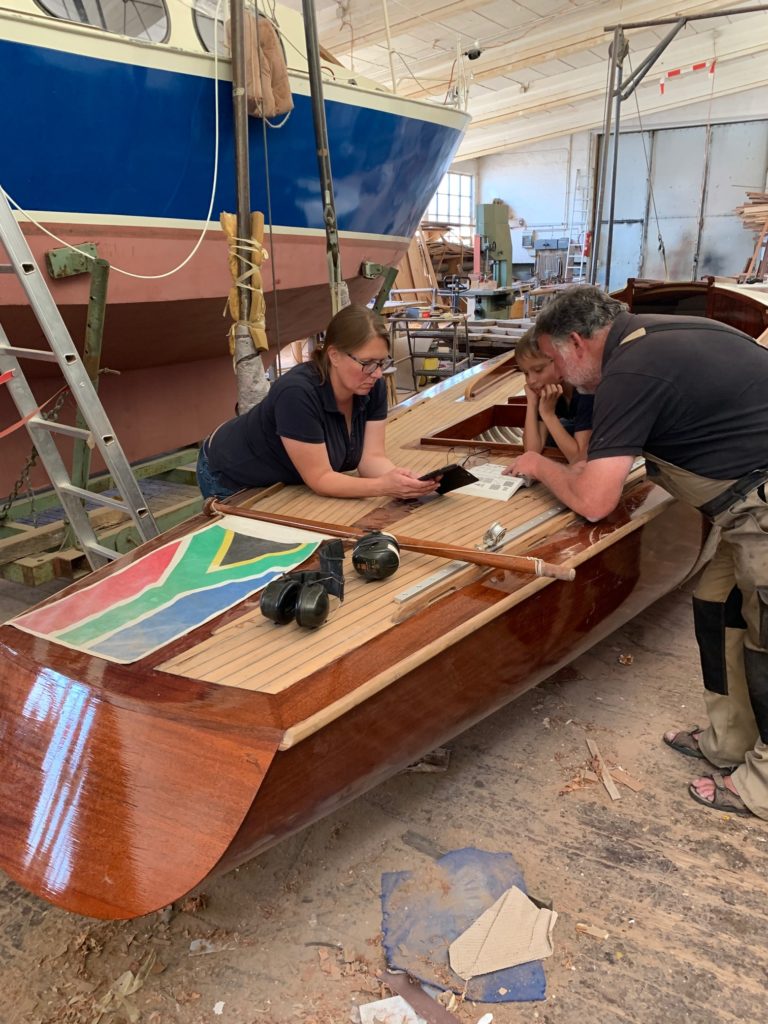 Under the designer rules cloak and dagger operations seemed to be the order of the day among the 30 square sailors according to Campbell.  “We were more than suspicious of the Rapid boys because they had her out on the slip for no reason we could see, other than adding lead to her keel to make her stiffer. This would have been allowed if we had been able to measure hulls in SA (I knew this was well outside our capabilities). Three of the Rapid crew, who were really good engineers in their own right, claimed that their external ballast additions were within the rules, and they would know.

“The basis of our 30 Square racing was dependant on all the owners accepting each hull as complying with the Skerry Cruiser rules – no difficulties would ever be raised provided the flotation complied with the builders’ marks and they all did. Both Rapid and Mariquita’s crews managed to abstract their sail plans from the 30 Square Owners’ measurement files to avert the intense curiosity (bordering on espionage!) that was being made by all crews into any other boat’s alterations.” 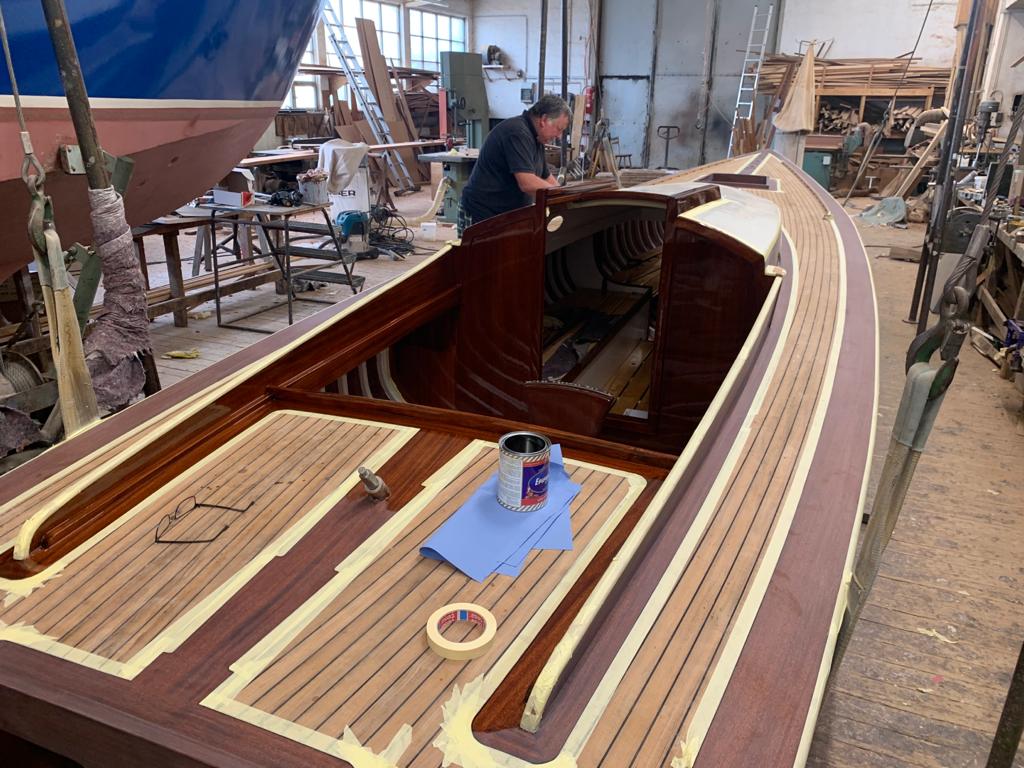 Thereafter, Mariquita was sold to Helmut Franschleader and moved to False Bay Yacht Club. David Abromowitz skippered her once in a late sixties Lipton Cup race, finishing second, but while she competed until 1973, she never won again.  Abromowitz also remembers the 30 square boats as being extremely wet. “They were about 40’ long and about 6’6 wide. The only way to keep the boat flat was to control the sails. It was quite dangerous to heel the boats, as there were no lifelines, no safety equipment and no life jackets. There was also no freeboard and every little drop of water came onto the deck. Generally they had a crew of five, who would sit in the cockpit. Foolishly, we sailed them in all kinds of conditions, weather didn’t matter to us.  We were young back then and nothing mattered.”

Mariquita ended up in Richards Bay at the Zululand Yacht Club where she languished for almost twenty years before Mike Daly found and bought her in 1990.  Unfortunately she was in a bad shape and needed major restoration.  Eric Bongers, who had sailed on the 30 squares, started the task of rebuilding her in 1995/1996.  There were no plans available in South Africa and the few photos that existed did not give much detail.  Fortunately he was able to get some records from Sweden.  Her basic 30 Square hull was was fully retained to the rules, but modern rigging and fittings were added.  Mariquita returned to the waters of Table Bay and even competed in a couple of regattas including Rothmans Week. 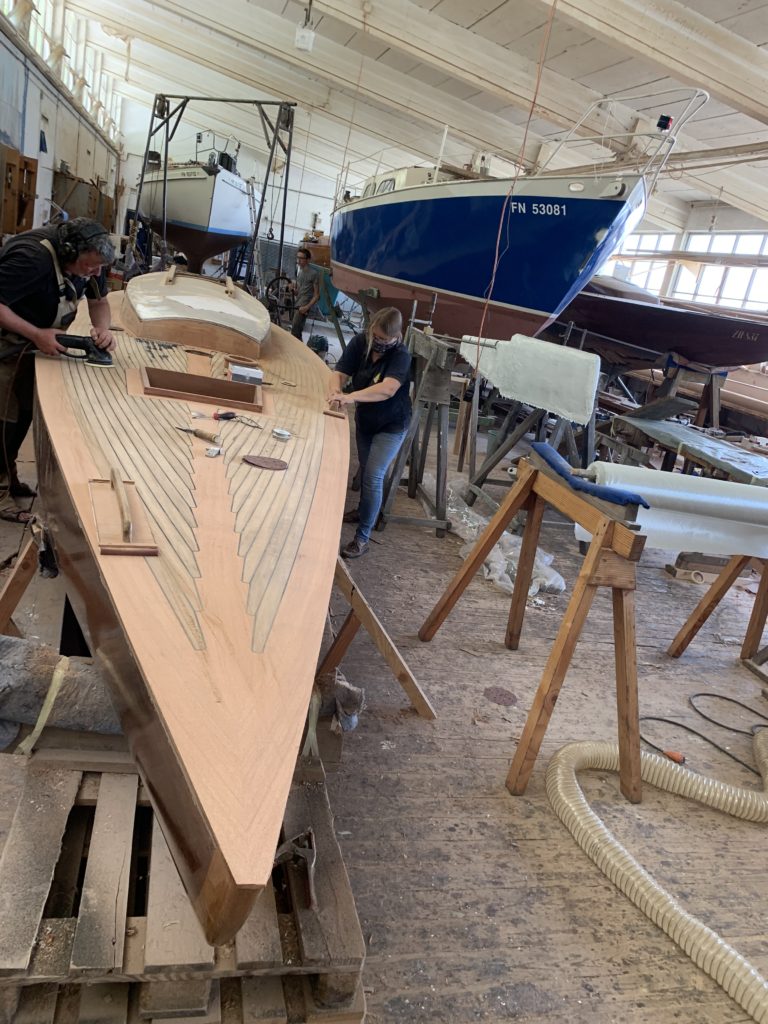 Michael Baumann purchased Mariquita in 2013 and shipped her to Germany where he has been painstakingly restoring her.  “We thought to be able to be done with 5l of paint, a stack of sand paper and some sweat.  Actually, it took us now seven years and about 3500 hours of work at a boat builder. About 70 % or so of the structure is new. We are finishing the last bits and pieces and will hopefully sail in a classic boat event starting August 7th.” 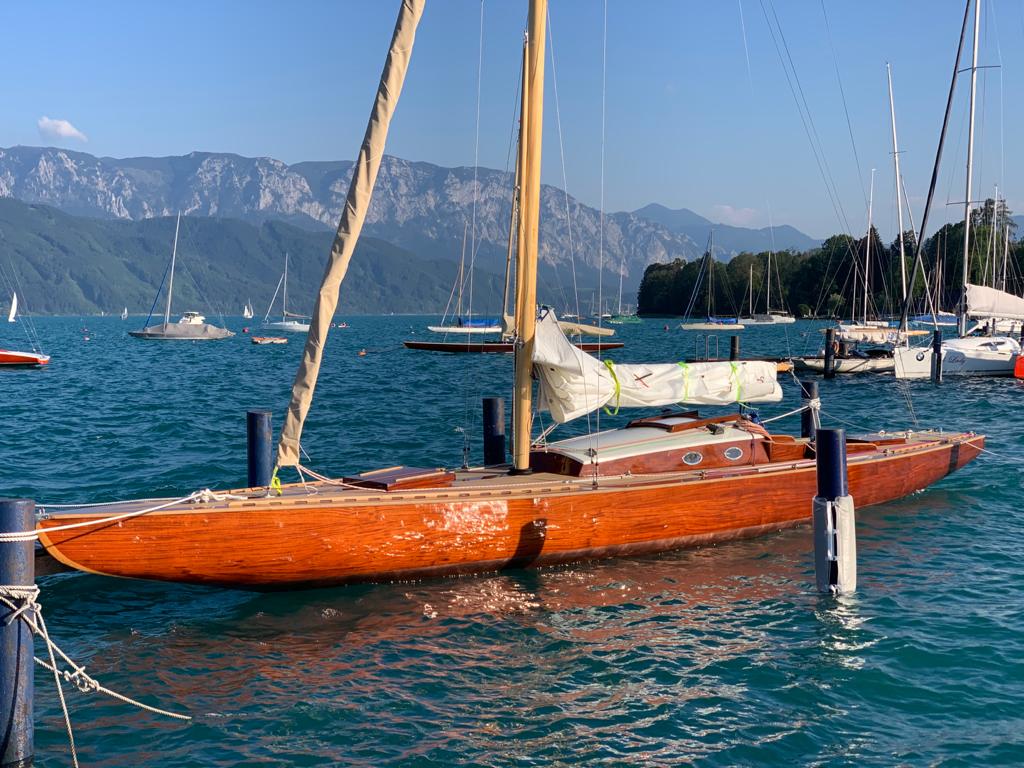 A restored Mariquita at Lake Attersee

Today she sports an immaculate teak deck, has her name elegantly laid out in gold and is the only 30 square boat of that fleet of 13 still in existence.

If anybody has photos of Mariquita from her Lipton Cup days, owner Michael Baumann would love to have them. He can be contacted at 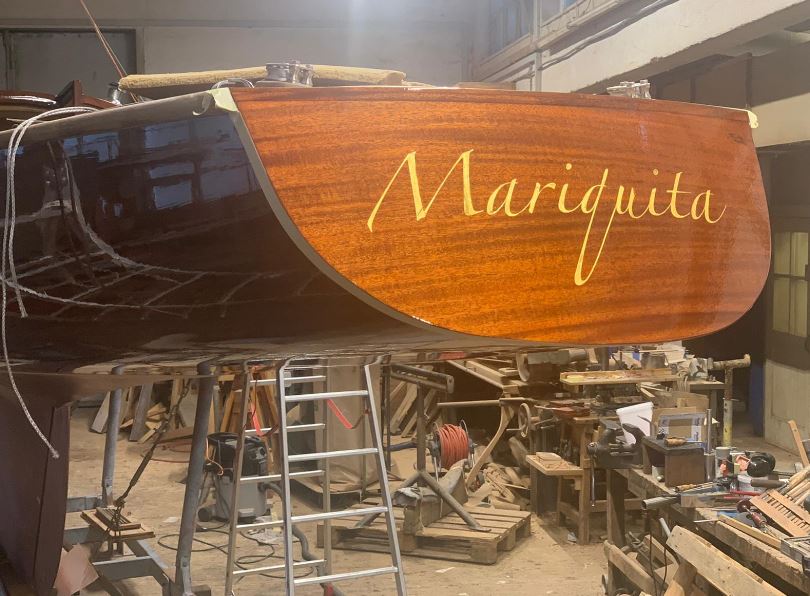 KINDLY NOTE : THE SEAPORT FISHING CRUISE SCHEDULED FOR THE 19 JULY HAS BEEN POSTPONED…

MonAmis at RCYC this Friday