Brave or Stupid – A book review by Liesl King

“Ships are the nearest thing to dreams that hands have ever made.” Robert N Rose 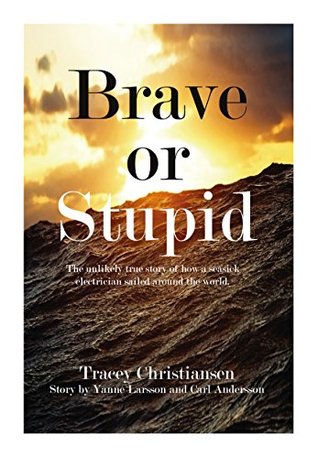 I am a lover of books. Actual books; made of paper. Something solid that I can hold in my hands, turning the pages while I slip deeper and deeper into worlds other than my own. Stories that entice you, that lure you in, forcing you to keep reading until the end.  Sorry, but Kindles are simply not for me. I tried, I really did, but I missed the solidness, the turning of pages and the smell that is uniquely book.

Hence when I discovered that the Royal Cape Yacht Club had a library, I was in my element. Lots and lots of books all about my new found love, sailing. The best of all is that you can take them out, read and return when you are ready. Even better was the suggestion that I review some of them on a regular basis for the newsletter.  Of course I couldn’t wait to get my hands on one! But which one to choose, when almost two walls are covered in books?

Fate came to my rescue. On a recent visit to the club, I asked Toni Mainprize, our GM to show me what the procedures are for taking out books. Upstairs to the wonderful library we went. Toni started explaining the procedure, while my eyes glazed over at the sight of so many lovely sailing books waiting for me to read them. Realising that I wasn’t quite paying attention, she proceeded to unlock the nearest cupboard door and selected a book in order to demonstrate the card system to me.

I think I sort of got the system, but what was far more intriguing was the actual book that she had randomly picked. You see its title was “Brave or Stupid”. And since the very first time I set foot on a boat, that has pretty much been the question I have been asking myself, over and over again. Am I being brave or stupid, every time I say yes to these weird and wonderful sailing adventures? And yes, the jury is still out on that one! Yet here was a book with precisely that title. It simply had to be the first book I would be reviewing.

Especially when I lifted the cover and saw the inscription. “To the Best Yacht Club ever! Royal Cape Yacht Club, we hope this entertains and inspires.” Tracey & Yanne. It turns out that Yanne Larsson and Carl Andersson with their lovely Halberg Rassy 42E named Albatross, arrived in Cape Town in December 2004, one of their last stops on their circumnavigation. In 2011 Carl’s story was published as Segla med Albatross (Sailing with Albatross). The book proved so popular that there was a request for an English version. Thus Brave or Stupid, told from Yanne’s perspective was written by Tracey Christiansen and published in 2014. 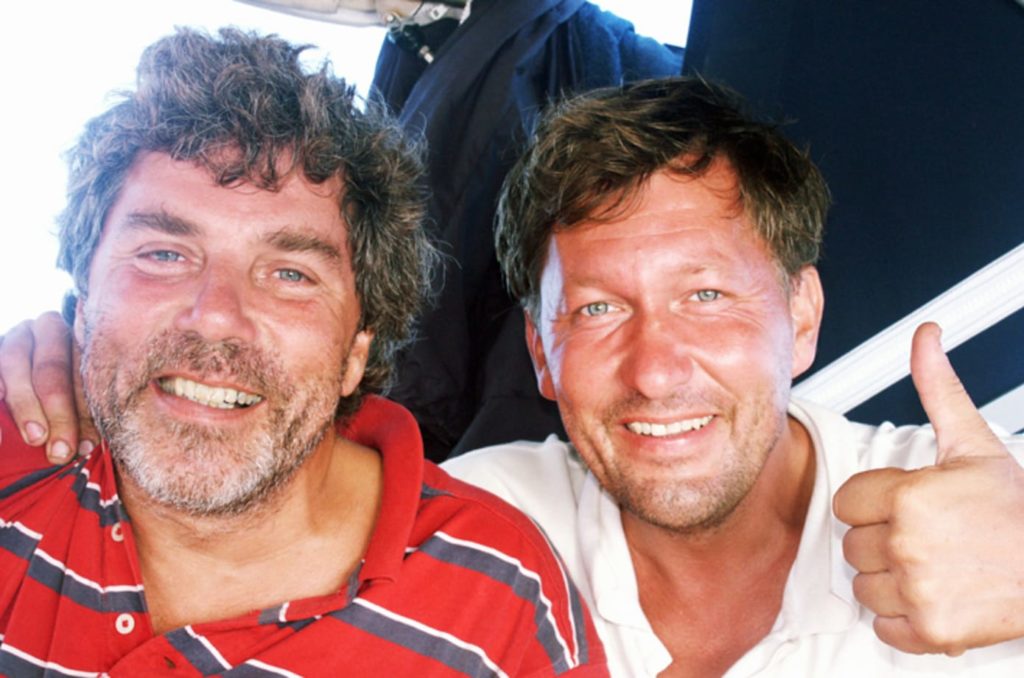 Brave or Stupid is the unlikely story of two middle aged, seasick electricians, who decide to sail around the world. Sailing around the world is not a huge thing anymore, thousands have done and thousands more will do it. So why is this story unlikely, you may ask. Well our two electricians, have never sailed before, have no money, no sailing knowledge, no boat and have never had even the slightest desire to sail anywhere, nevermind around the globe.

So what happened you may ask? Hmmm, a lot of red wine happened. Sitting on a windy cliff top overlooking Omaha Beach in Normandy, on a cycling holiday in France, Yanne and Carl had enjoyed a fair bit of red wine, when the talk turned philosophical, as it often does. The two of them decided that one has to do something once in your life. “Life’s way too short. We spend too much time dreaming about what we want to do and never doing it”, said Carl. “I’ve got an idea. How about we sail around the world?” And just like that the decision was made. Yanne still blames the wine though.

Ignoring the fact Yanne had no money and Carl had a wife and children, they decided to set their plan in motion straight away. So what do you do when you have no boat and no sailing knowledge?  You go and rent a berth at the harbour of course. Imagine the harbour master’s incredulity when he asks how big the boat is that they want a mooring for. “Um, as of this moment we don’t have a boat”, Carl enlightened him. “We don’t know when we will have one, in fact we don’t know how to sail.” Still they left the harbour with one rented mooring to their name.

The book takes you through them learning to sail and then setting off on their adventure of a life time, the slow way around. For both of them it was never about circumnavigating quickly. Hence at each stop, they get to know the locals, repair anything electrical and stock up on the essentials such as the large quantities of red wine and whisky required. Plus the obligatory Danish snaps Gammel Danks for toasting each arrival in port. Somewhere along the way there was bound to be an issue with the fact that Albatross was essentially a floating “bar”.

Six months after their departure from Helsingborg, Sweden, Albatross and her crew had to clear immigration for the first time, on arrival in St Lucia. “So how much alcohol are you bringing in”, an officious looking immigration official asked. “How much we are allowed”, Carl retorts. “Oh one litre of spirits and two litres of wine”, comes the answer. Yanne, realising that the islanders clearly had no idea of the drinking capacity of the Swedish, decided to come clean. “Um we have 300 litres of spirits, 700 litres of wine and 2000 cans of beer onboard.” Sometimes it helps to be honest, as the official burst out laughing, before pronouncing. ‘You shouldn’t mess with da authorities, man. But dat’s ok, I like a joke.” If only he knew! 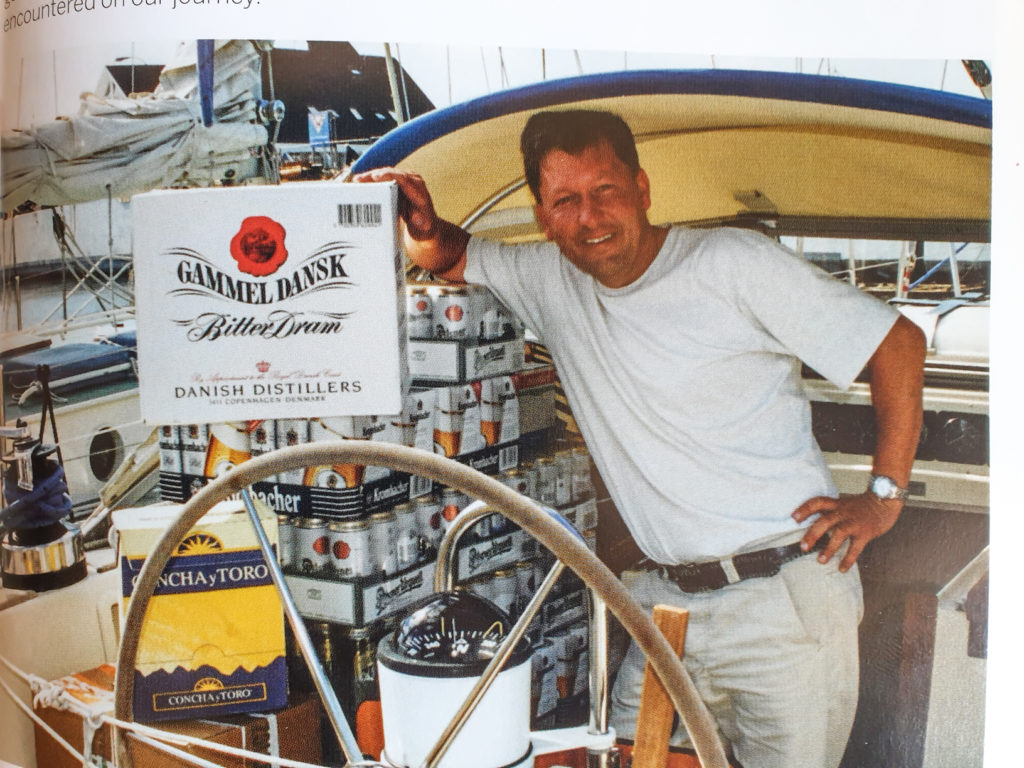 This is truly a tale of adventure, storms, tropical diseases, tornados, cockroaches in the fish soup and even love. It is guaranteed to have you rolling with laughter. Even in Cape Town where I thought they couldn’t get up to anything that would surprise me, they most certainly did. It involved the Cape Town Railway Station, rugby tackling gangsters and a ride in a police car.

Three years after they set off, Albatross and her crew returned to Helsingborg. Yanne sums their arrival up perfectly. “Six years earlier when we’d applied for a berth in the harbour for a boat we hadn’t got and couldn’t have sailed even if we’d had, we’d been told that no one from Helsingborg Yacht Club had ever attempted to circumnavigate the world, much less two idiots who didn’t know port from starboard and were inclined to shout “turn left” in a crisis.” Now Helsingborg was in sight, its piers crowded with people, cheering, shouting, waving Swedish flags and welcoming them home.

If sailing is your passion, you enjoy a well written book and you love to laugh, this is the book for you.  My lodger got quite used to hearing me laughing hysterically at all hours of the night.  I will be sad to hand it back, but I am hoping that many of you get to read it, even if it is just to laugh at the peccadillos they manage to get themselves into and mostly out of.

Yanne and Carl, I hope you make it back to Cape Town and the Royal Cape Yacht Club one day, we would love to see you again. Just keep clear of the Station please!

To view the Provisional Results of Race 01 of the Lufthansa Twilight Series, please click…