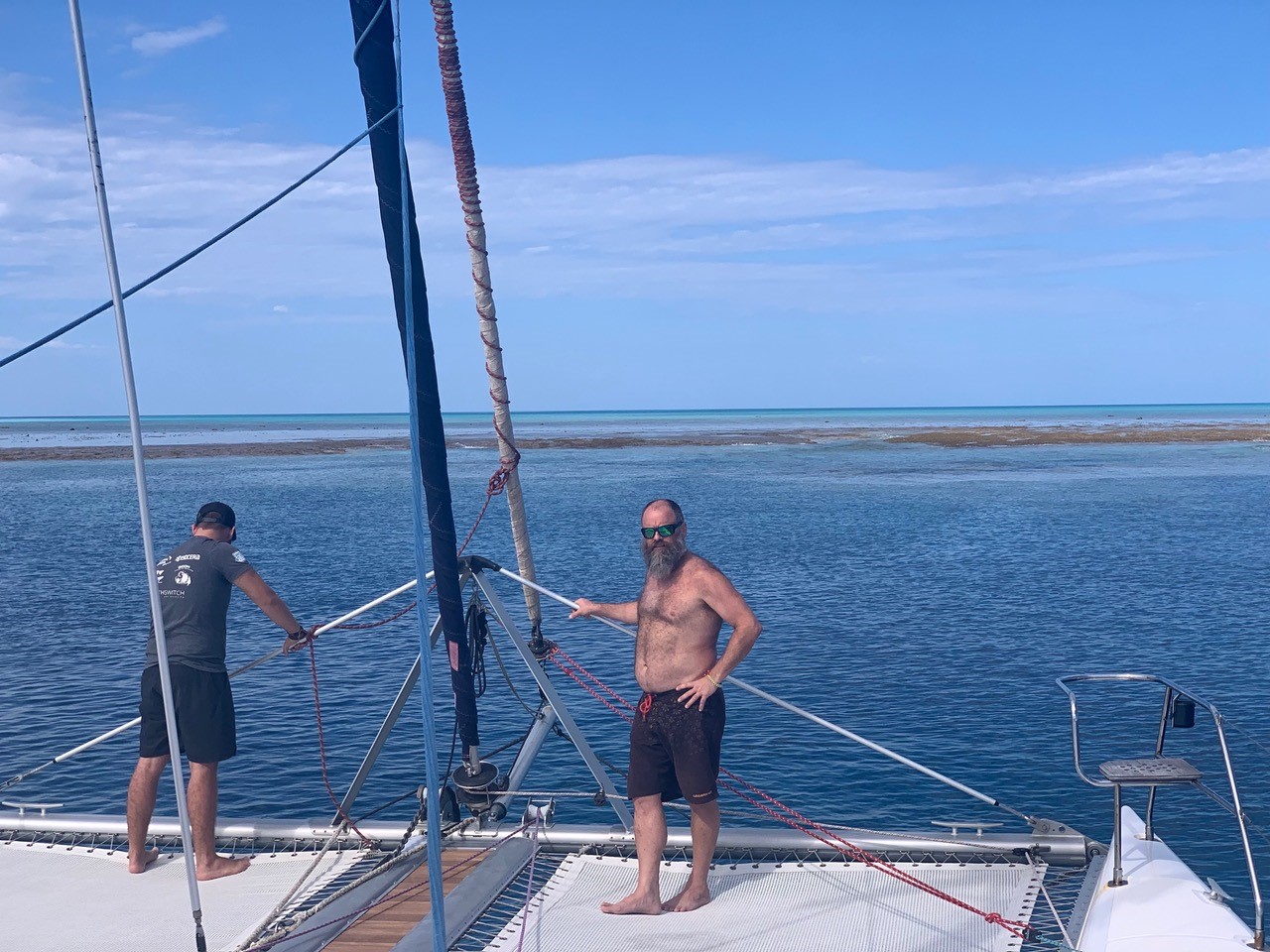 The Peculiar Whales by Pete Sherlock 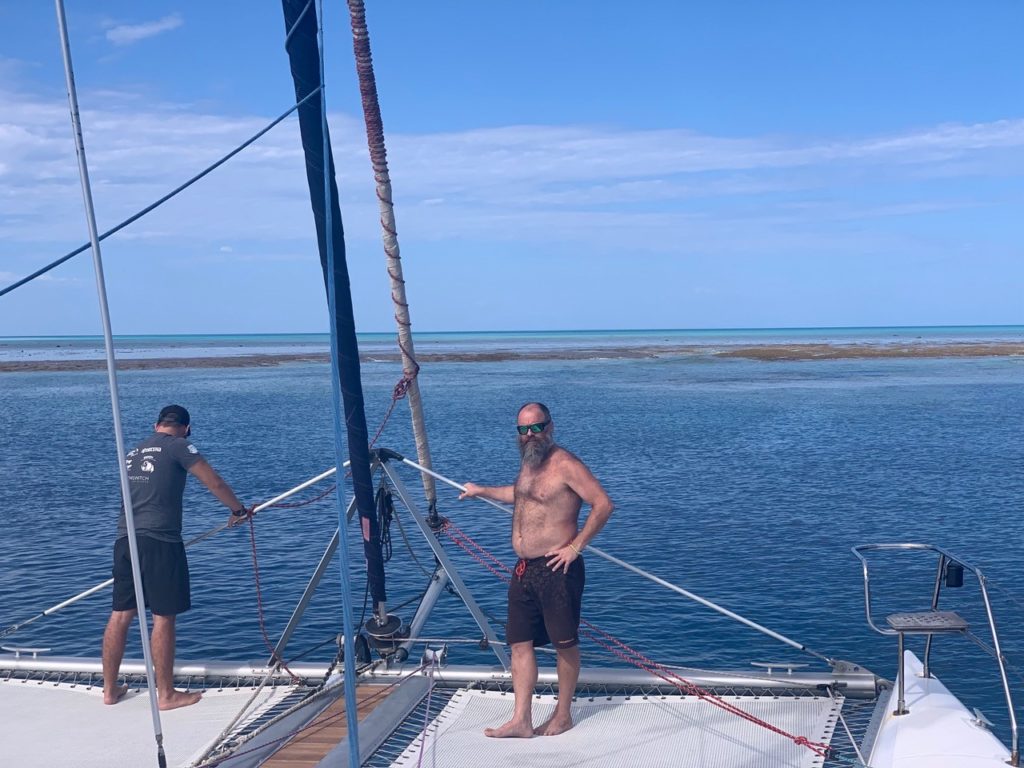 We watched Bassas slip very quickly into oblivion behind our wake as we pointed Amarula’s bows on a heading of 231° True and felt the sails fill with the South East Trades and the fresh promise of landfall in around 450 nm. We very quickly fell into the routine of a crossing again and our days were punctuated with catching fish, meals and the midday sat phone weather update. Every evening we would gather around the helm station to watch the sun sink into the ocean in an incredible display of warm red tones and the chance to perhaps witness a “green flash”.

An hour before sunset as a precaution and a ritual, we would close the rear cockpit enclosure, which Bob had nicknamed the Mordor curtain, to make sure we were cuckooned inside the cockpit for the night watch. Putting the enclosure down stopped anyone casually relieving themselves overboard and all the potential disaster bound with a momentary lapse of reason alone at night in the middle of a great big ocean. It also acted as a barrier in case we had a wave break into the cockpit. As we stood watch alone at night the rule was really simple. No-one was allowed out of the cockpit without a second person present.  No sail change would occur without all three of us being awake and involved, with someone at the helm at all times. Simple rules to adhere to which seriously mitigated risk – “Sail if you will but remember that Courage and Strength are nought without Prudence…”. 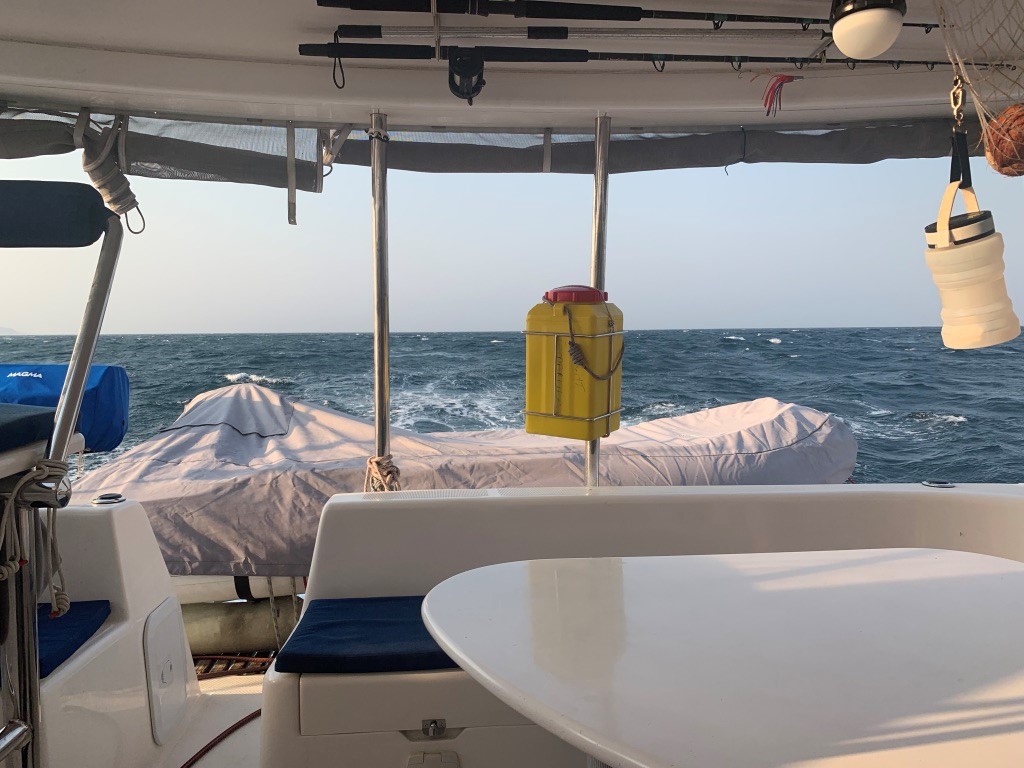 Night watches started at sunset and ran in three-hour stints. We also circulated shifts nightly so that no-one ended up with the graveyard shift consistently.  So the watch breakdown worked thus: 6-9, 9-12,12-3, 3-6. If you started on the first shift on night one then you rotated to the 2nd shift on night 2 and the 3rd on night 3 and so on until you repeated your initial pattern. I know every Skipper has a watch shift pattern they prefer, but with a crew of three standing watch solo, this one seems to work the best for us.

Each three-hour watch was broken down into 30-minute segments where you had to do a radar check from 4 miles through to 36, an AIS check and a visual check on sails, rigging and instruments.  The logbook had to be filled in at the end of the watch complete with any notes. These notes always make for good retrospective reading!

Around 60 miles short of landfall, the Trades started failing and flailing, fighting against the North Easterly wind that was married to the Mozambique coast at this time of year. The current was also a factor and as we slid into it we saw our SOG increase and the sea temperature rise.  It was a good feeling to be in the current with a favourable wind from abaft and close to seeing land. 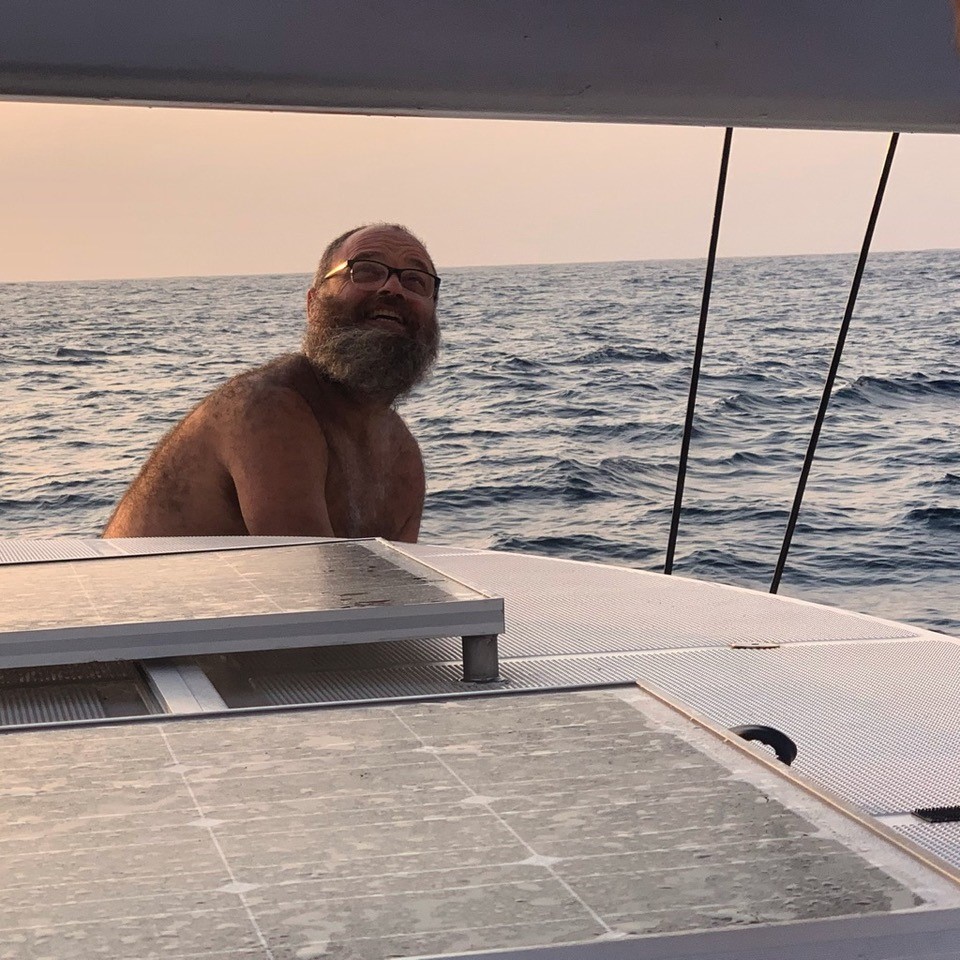 I was sitting at the helm, it was close to midday. The sky looked moody and grey with a lot of soft, moisture laden clouds hanging at low altitude, blocking out the sun, but not managing to reduce the ambient temperature. The sea was flat with very little swell but it had a most unnatural motion to it. It looked like a series of whirlpools, water twisting and turning in rotating circles, slapping both the bridge deck and the hulls, unsure of which way it should flow.

I noticed something quite far ahead that was headed into wind. Grabbing the binoculars I tried to pinpoint what I had seen. I called out to Bob and Chris to come help scan the horizon. It was not long till we spotted an orange buoy heading into the wind at 3 or 4 knots. It was still about a mile away but it was very strange that it was headed into wind. What on earth would make a buoy head upwind?  We were on an intercept with the object and would soon discover what was going on.

Now here is a thing I have always noticed about whales in the West Indian Ocean. They are incredibly curious when we are in their vicinity. They will almost always come up to us and have a look, checking us out or probably just wanting a closer look at the beautiful lines of Amarula. Either way, whenever we see whales I get very nervous as their significant size moving around Amarula presents a risk. Of course the sheer excitement and the sense of connection their visits bring somehow always makes the danger seem more perceived than actual, but I have no doubt Amarula would come off second best in a collision with one of these magnificent creatures.

Chris saw it first, there were two whales following the buoy. They looked like pilot whales through the binoculars but it was hard to tell. They were just astern of the buoy and following it as it continued heading upwind at around 4 knots. By now we were less than a hundred metres off the buoy. It was about the size of a race marker, approximately 2 metres in diameter and it was a very bright orange. It looked like it was inflated and was not made of a robust or heavy material, rather constructed of something similar to those cheap colourful blow up balls you find kids playing with at the beach. It had big numerals written horizontally around the centre and they were displayed quite clearly for us to read – A124. Above them and directly on the top of the buoy were several QR code type images. It was hard to distinguish exactly what they were – it may have been some sort of Cryllic writing or computer scannable codes, but they were certainly positioned to be read from above.

By now we were almost upon the buoy and this is when things started getting really weird. Yes there were two whales following it, but what we had not yet noticed was that there was another whale that was towing the buoy! Yes, hard to believe, but it was towing the buoy. This explained how the buoy was moving upwind. The third whale had its face buried in what appeared to be a silicon snoot that fitted snugly over its snout. It was not strapped in at all, just a simple cone shaped snoot that the whale could push it’s nose into and swim. It looked comfortable and was clearly designed to be such. If the whale stopped swimming it appeared as though the snoot would fall off, in other words this snoot was held in place by the forward pressure of the whale swimming. 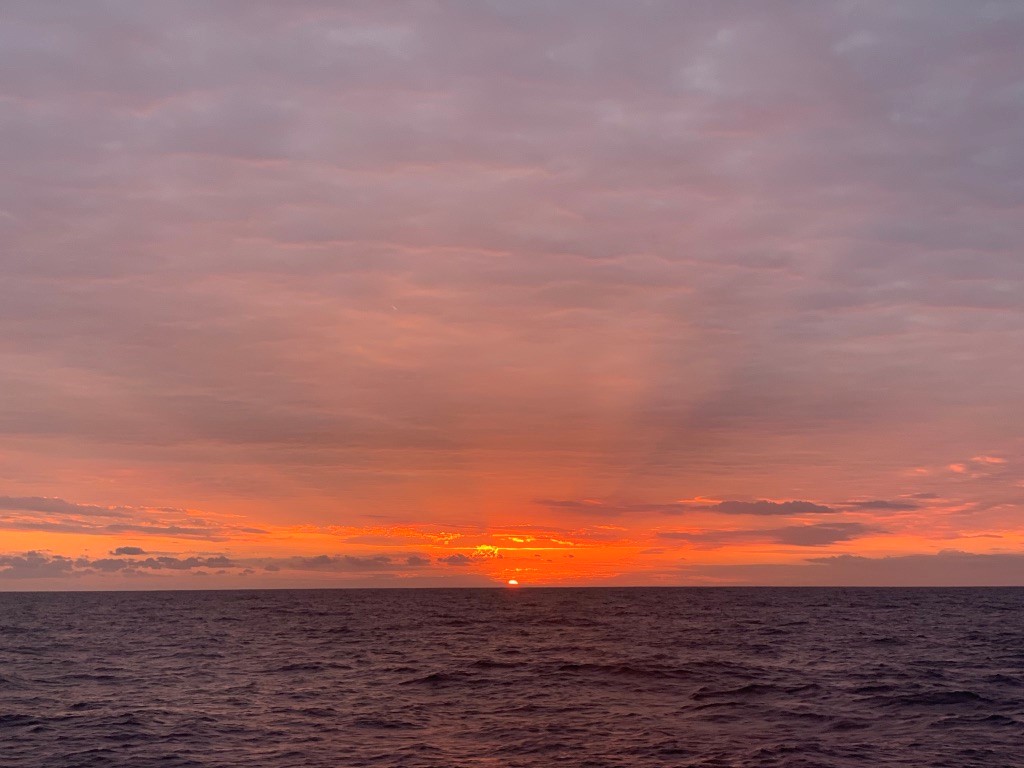 The snoot had 3 stainless D shackles attached, one on the top and one either side of the snoot. These shackles each had a dark grey fabric belt (similar to a ratchet strap belt) which led to an O ring about two metres above and behind the snoot. This O ring was just below the surface of the water and was clear of the animal below, unimpeding its movement. From this O ring a strap similar to the connecting straps led up towards the buoy and ended at another O ring from which two further straps ran to and connected the buoy.

We sat there as these 3 whales cruised past us. They were not interested in us at all, not even throwing a glance our way. They were clearly on a mission and continued to head North East in haste.  I watched the buoy until I could see it no more. We were all flummoxed. What had we just seen? Did we really see it, was a whale towing it? I notched it up as another incident that defied logic and wrote it up in the log. Drugs or Military we all assumed.

The sea is truly a surprising place. Just when you think there is nothing around you it offers up a conundrum. Perhaps that forms a large part of its allure. You can never say you have seen it all, whilst sailing an ocean, but you can say you have seen things that defy description or logic. My log bears testimony to this fact, where under notes on Thursday the 1st of August 2019 you will find the tale of three peculiar whales.