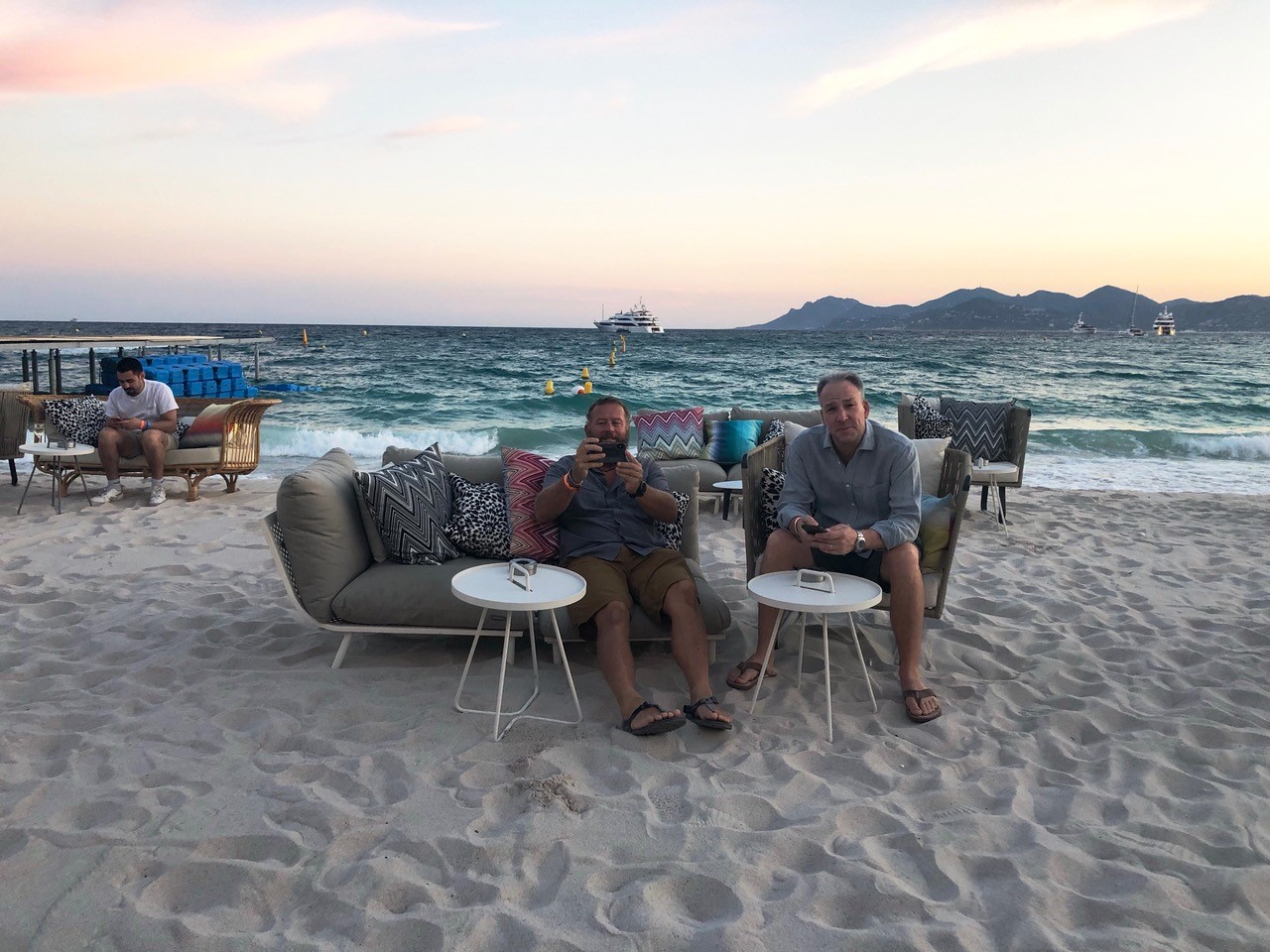 In Vogue, or perhaps rather in Russian Bay – Pete Sherlock

The sun was blisteringly hot.  My skin seemed to crawl wherever it hit me.  My forehead was covered in beads of perspiration and I felt totally overdressed in my collared short shirt, Lululemon “weekender” shorts and my faithful Lalizas docksiders.  I shuffled my chair further under the parasol, making sure I was totally unexposed to the sun.  The waiter appeared with another bottle of Minuty Rosé, chilled to perfection and dressed so perfectly on the silver tray it seemed art directed.  With a flourish it was opened and our glasses were replenished, the cool liquid somehow inspiring energy in an otherwise heat soaked lazy environment. 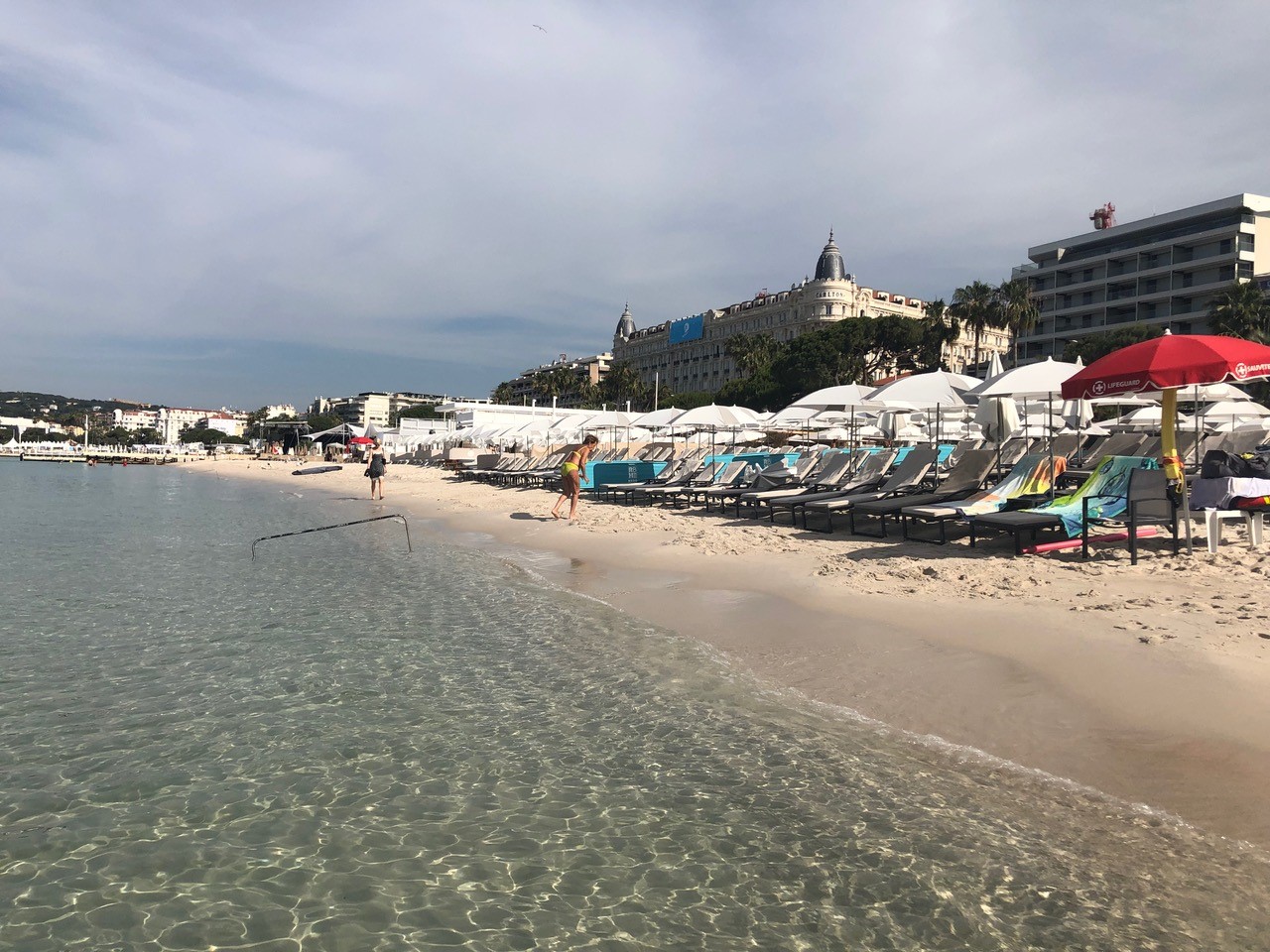 The beach that we were based at on the Croisette

There were six of us seated at two tables pushed together along with their adjacent parasols.  The tables were hardly anything special, a shiny brown/beige surface with faux cane legs curling beneath them.  We sat on matching chairs, each one perfect in appearance but also plastic.  It certainly looked good, and the terrace was very busy, as it was every afternoon.  I looked around, our conversation was no distraction for the hubbub of humanity around me.

There was no one prevalent accent or language, each colloquy fighting with the one alongside it to be heard, for it must be more important.  French, English, American, Australian, Italian and a scatter of Scandinavian tongues were all wagging at the same time, each one totally comfortable with its own personal consequence.  The bodies were all made for (or by?) TV, browned by the sun, toned, exposed, pushed up and out and often helped in reach by clever miniscule pieces of clothing or a skilled surgeon’s hand.  More it seems rather than less, was the order of the day here. 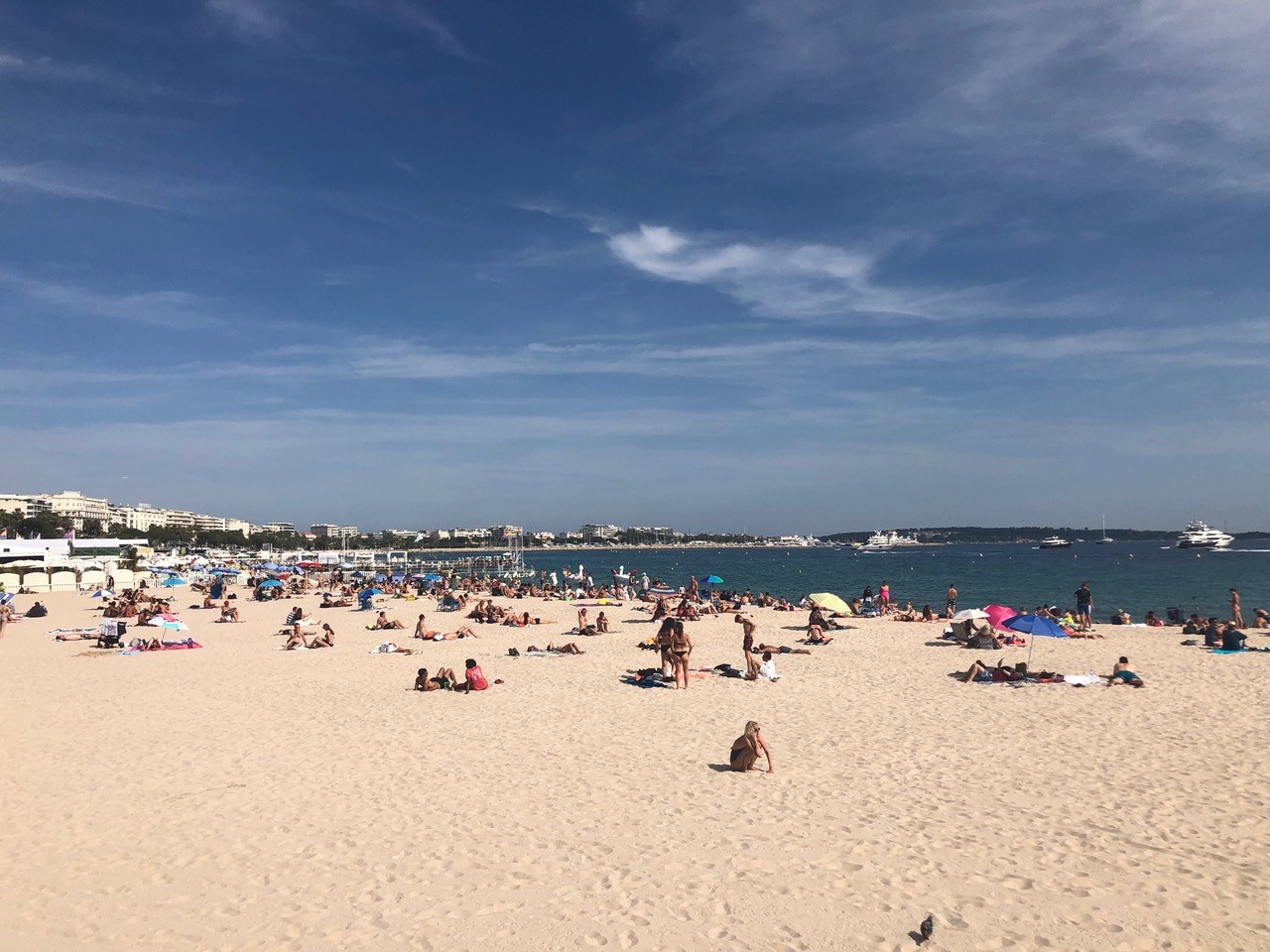 The only public beach in Cannes. The rest are private and require an entry fee or to be resident at a particular hotel

Don’t get me wrong, there was plenty to look at and appreciate.  It just all seemed a little intrusive, surprising, a little like that ad that pops up in the middle of your YouTube watch, completely uninvited and quite frankly an unwanted intrusion into your concentration.  The waiter was back with our food.  He placed a small offering in front of me, a gourmet burger.  The menu had promised a “Hamburger pur boeuf, tomate, salade, cornichon malosol, sauce burger” and at 42 Euros I must be honest I was expecting something a little more curated and sizey.  French fries were now being whisked from the tray and dotted throughout the table in some kind of enchanting dance, heralding their appearance.  I drowned my disappointment with another sip of the delicious Minuty.

The sea always has its own aroma, a mixture of itself and what it holds in suspension, each piece of coral or seaweed adding an imperceptible flavour making the essence colloquial. No two oceans or even adjacent seas issue the same response to your olfactory system and there are some who say that a seasoned sailor can tell you where they are just by smelling the ocean.

As I looked over the terrace, across the Croisettte with its ever-snaking trail of humans ambling along it and past the Marquess and installations that dotted the private beaches, I could see the ocean.  It seemed resentful and crowded. Over designed and over length yachts placed haphazardly, floated on its dirty blue surface, helicopters flipped back and forth between the yachts and the port, skimming the black haze that lay a few hundred feet up.  The beaches although clean were cordoned and reserved. Each block covered in sun loungers and micro bikinis, cocktails and plateau de sandwich, coconut flavoured sunblock imbued with fake shimmer and cigarettes.  So many cigarettes.

I gathered myself and tried to concentrate on the business meeting at hand.  Skip (my business partner) was sitting to my left and was looking for some assurance from me.  Our clients sat across from us, even more uncomfortable and unused to the heat than us.  Their upright body language and Scholl sandals did little to hide their Germanic essence.  My head nod seemed to do the trick and I retreated back inside myself again as quickly as I could.

I could feel Adéle pull at my sleeve.  I knew what was coming as I turned to find out why.  I could see it in her eyes.  I needed to abandon my melancholy.  For here I was sitting on the Carlton Terrace, perhaps one of the most in vogue places a human could be present at.  The terrace was the social hub of Cannes and we were here to attend the Film Festival. 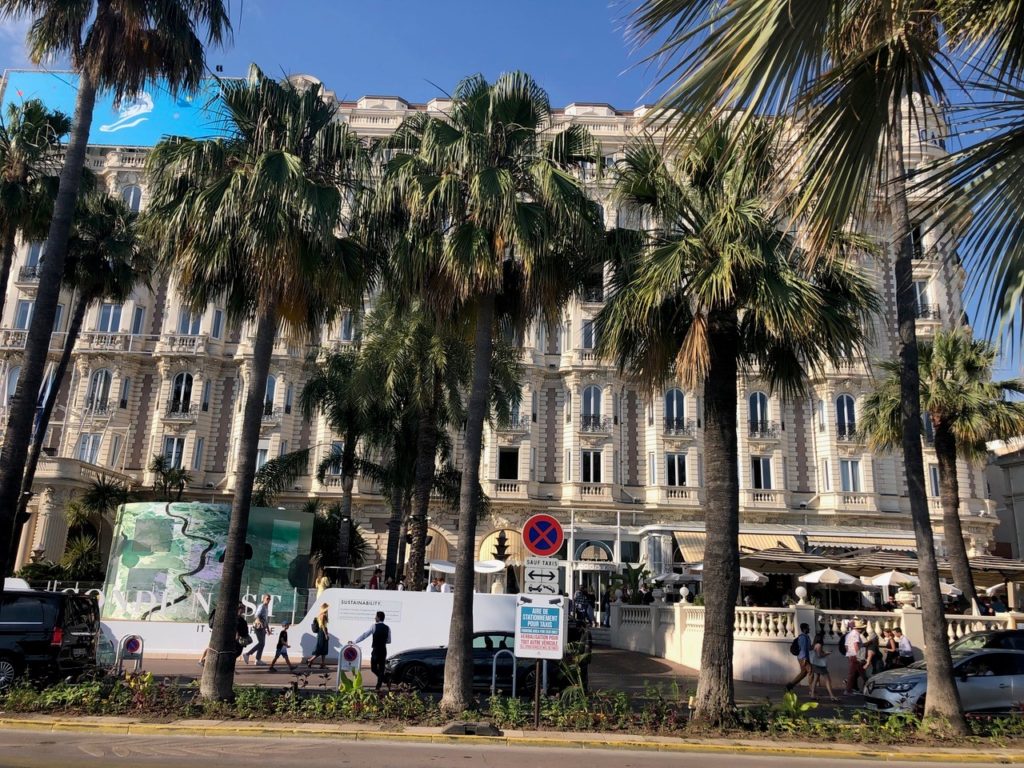 We had flown out of Nosy Be a few days ago and into Cannes for a business hiatus I could not avoid.  We had walked out of the jet in Nice, shrugging off Island time and ancient circadian rhythms and entered a world of bright lights and beautiful people, of brands and products, overindulgence and partying, late nights and even later mornings.  It was a privilege to attend and be a part of this roadshow, a time when all in our industry celebrate, congratulate and network.  We were there to support our clients and attract future business.

But instead all I could think about was our last evening in Russian Bay, before we sailed back to the Marina and got in a tuk tuk to go to the airport.  I think perhaps Russian Bay is one of my most favourite places on this planet.  We were anchored about two hundred metres offshore of Andrés place.  It was completely wind still, the water appearing like a solid sheet of brushed steel, reflecting the blue sky, the three boats at anchor appeared to be trapped as they lay stationary.  Even the monohull was for once immobile.  The sky was endless and dark blue, with a short swathe of high level cirrus, looking like a harras of Camargue horses, manes and tails aflutter as they gracefully galloped towards the sunset. 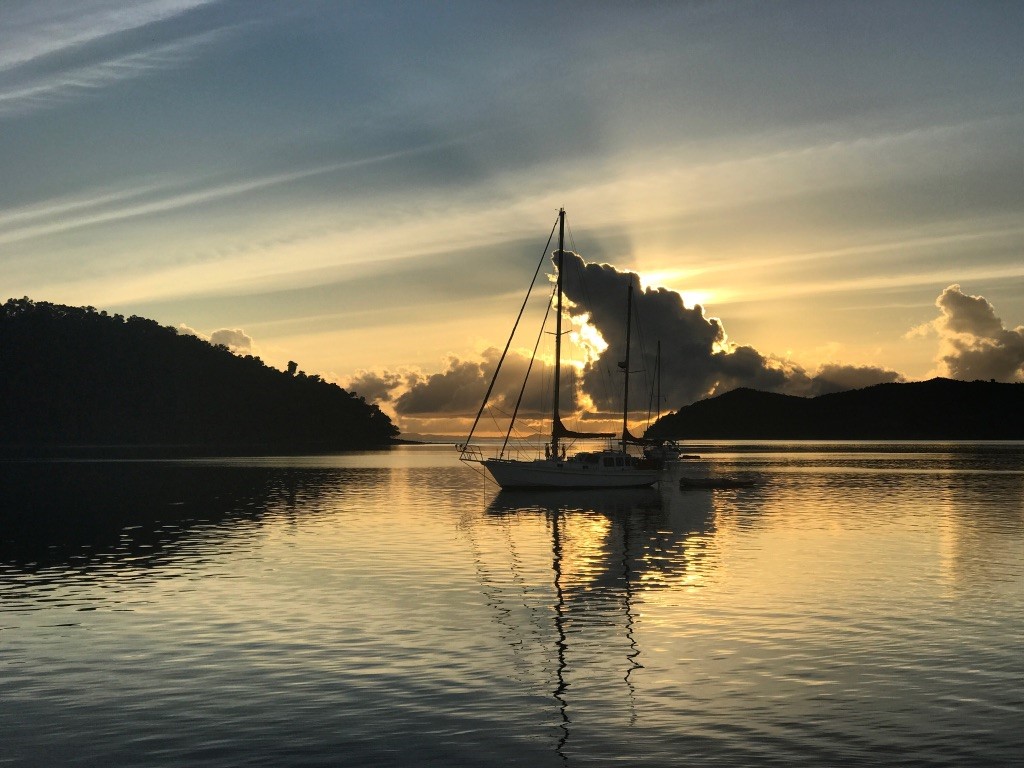 The cloud sat above the hills and horizon, muting the sun as it dropped.  The resultant ambient turned the bright tropical colours into pastels, soft and glowing, drawn in broad strokes through the jungle and palms down to the beach.  The sand lay unbroken, not a footstep marking its soft beige texture.  The waterline ebbed and flowed in long, slow pulses, hardly making a noise as the water slipped over the sand dancing to a long love song.  There was a dhow pulled up on the beach, sitting on the highwater mark, full of character and untold stories of simpler times and honest labour.  The solid lines of planking running its length were patched haphazardly in places, with anything from car tyre to plastic pallet filling the holes uncomfortably and inconsistently. 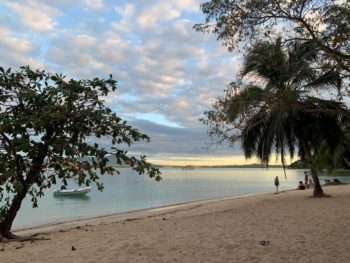 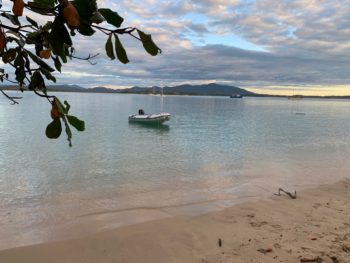 Russian Bay is sublime at sunset

I was standing alone at this moment. Alone except for the vista that lay before me, the colour and vision feeding my soul, the Three Horses Beer (they only come in quarts) satiating my thirst.  Leaning on the helm station my sight savoured the sailboat that brought me here, she showed her scars but looked shiny and bright, she exuded a happiness that was impossibly contagious.

I could not wait to shake off Cannes and return to the wild. 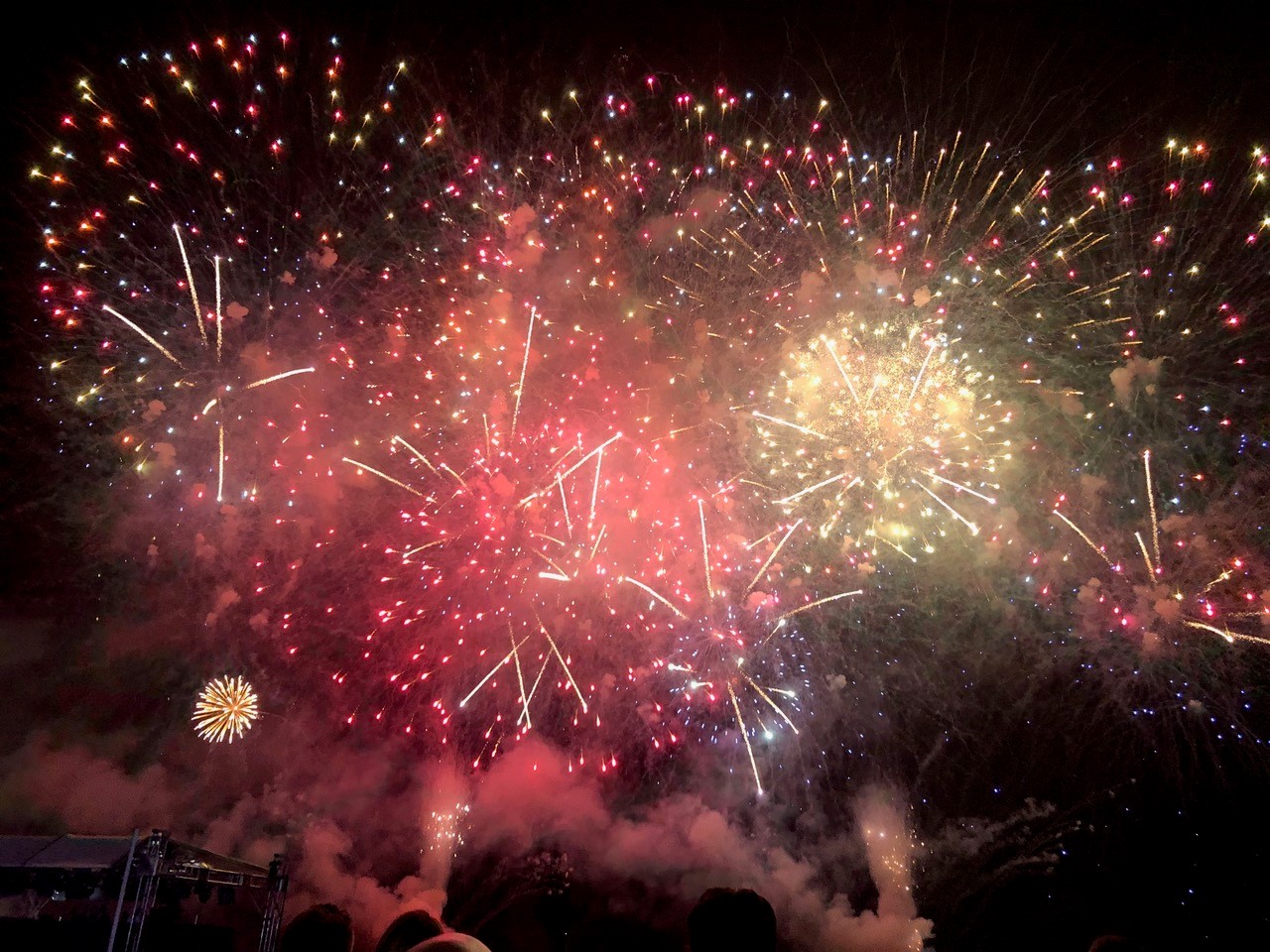