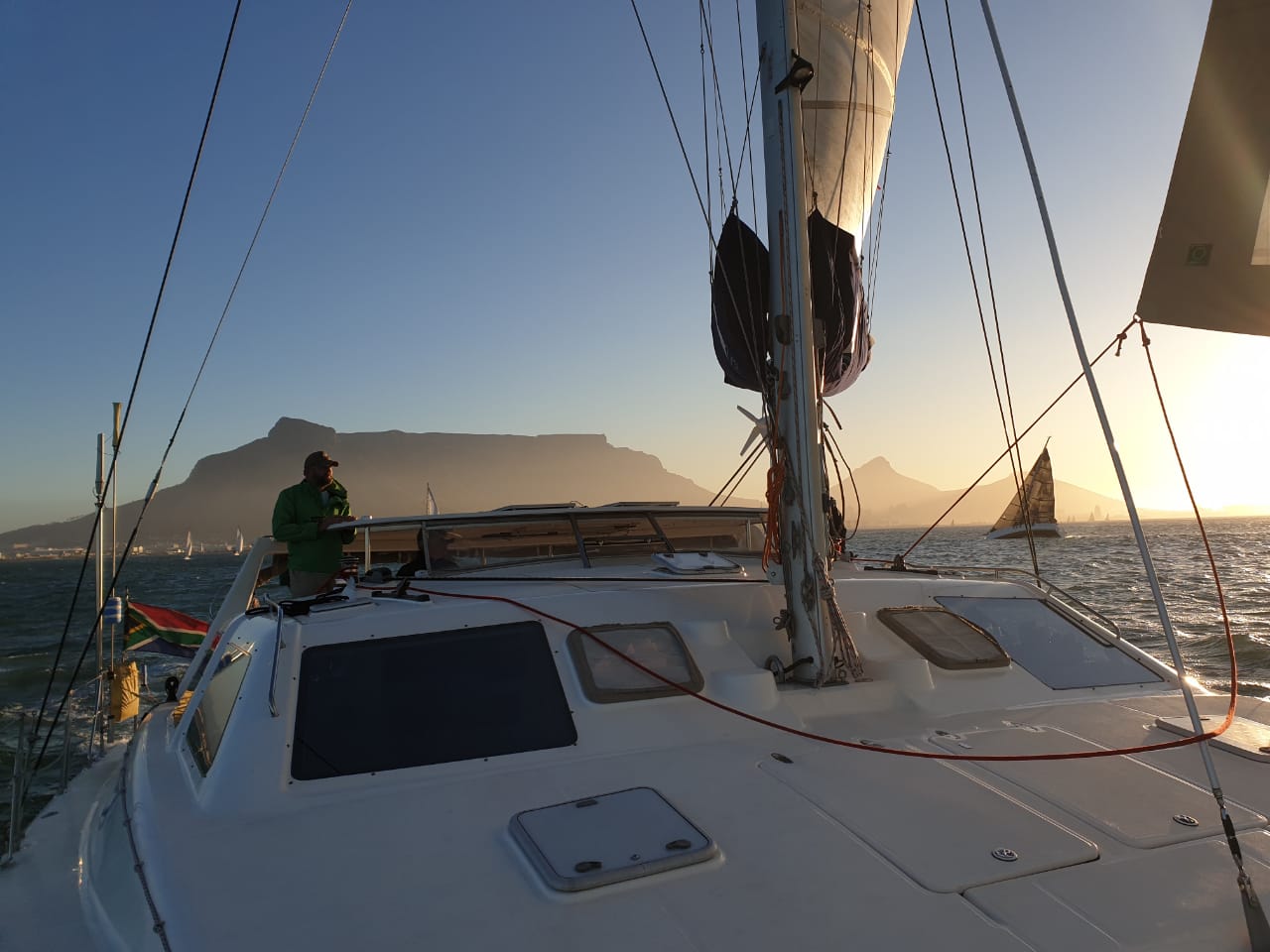 A sail on the dark side by Liesl King.

It had to happen eventually, I guess. I had avoided and side stepped the issue for a long time, delicately skirting around precisely why I am being vague when invited. “I am committed to my boat”, worked very well. Also good was “I am in love with the speed of the Cape 31s” or “I am more of a delivery kind of girl”.  In the end, I was desperate. You see I hadn’t set foot on a boat since November last year, when my beloved Rolls Royce suffered her accident. Oh she was fixed earlier this year, but then Covid happened and then life happened. Bottom line is that I had serious withdrawal symptoms and hence I finally said “yes”. 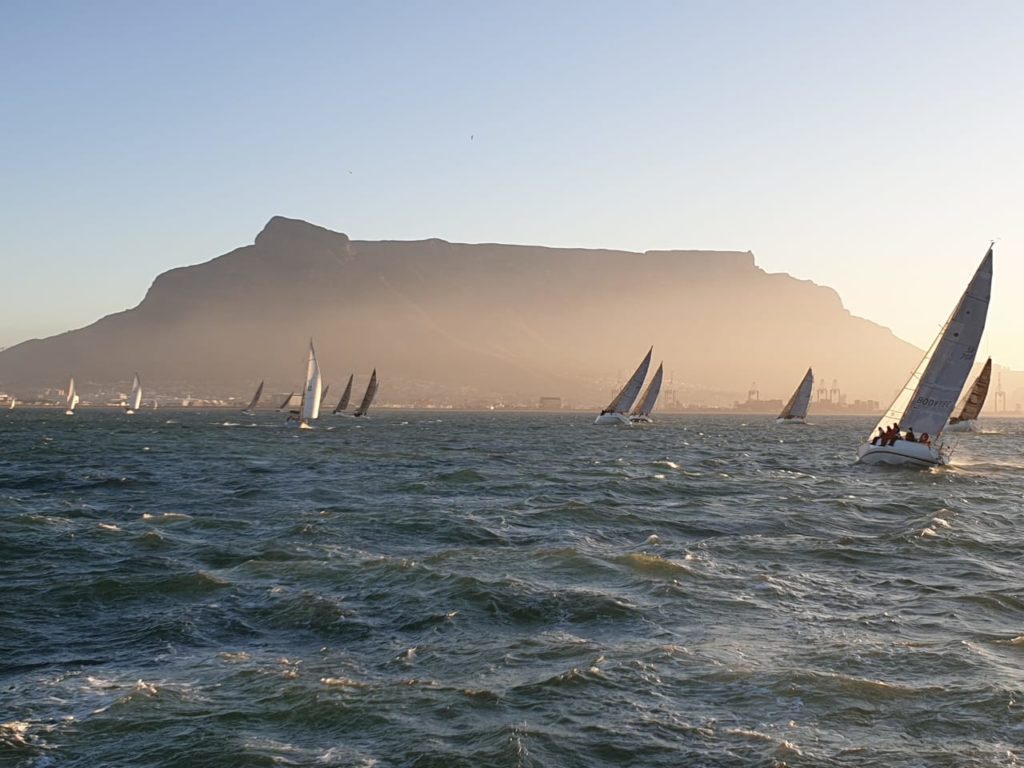 I accepted an invitation to go sailing on a catamaran. For a Cape 31 girl there is no greater sin! You see, as a youngster growing up in Cape Town, those were the boats with the skimpily clad girls on, sipping champagne off Clifton beach. Sailing they most certainly did not do. Hell no!  It was motor out with a bevy of beauties, drink champagne, suntan close enough to shore so that you can be admired and then motor back. Fun probably, as long as you had enough suntan lotion on. But sailing, definitely not in my books.

The grown up me, saw cats as blue water cruisers. Clifton was replaced with Caribbean islands and azure blue water, but the sun kissed girls lounging about drinking champagne remained. Nope these boats were not sailing boats.  So why did I accept an invitation to go sailing on one in the Twilight Series? I am going to blame the gin and tonic I was drinking at the time and the fact that I was seriously missing the ocean. I was so desperate that I would have said yes to a ride from the jetty to the slipway! 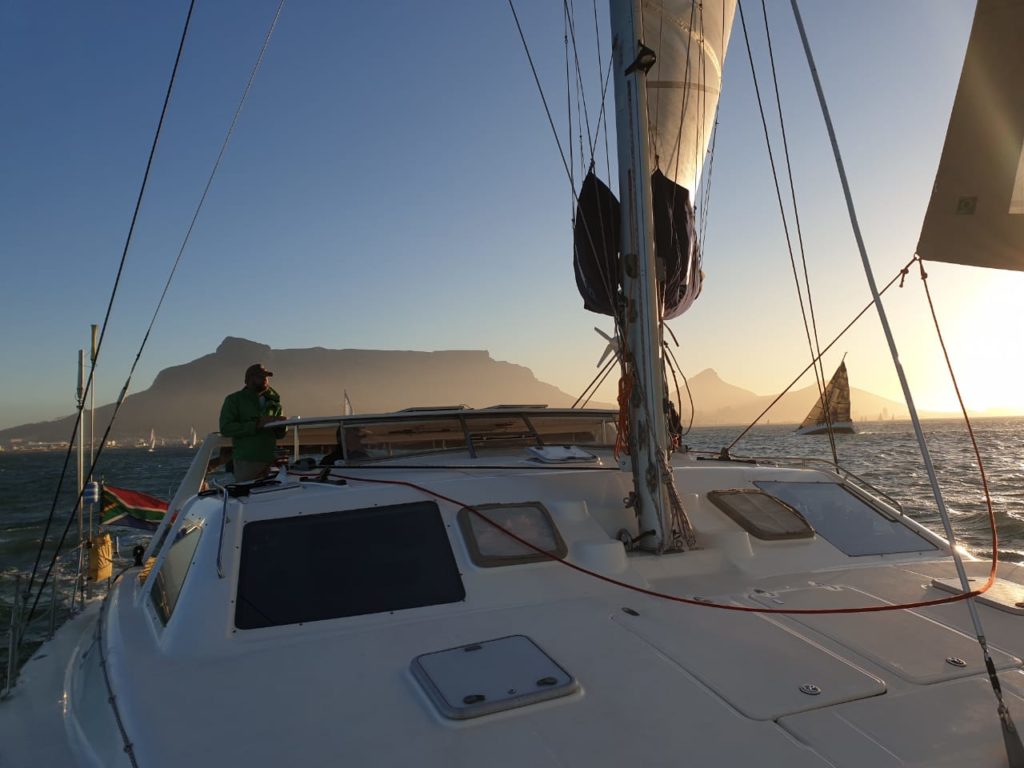 Come the appointed hour I presented myself at cat corner, complete with foul weather jacket and my personal floatation device. Yep, even for a cat I was going to be donning my PFD, I am a safety first girl after all. The foul weather pants I figured could stay at home. The wind was a bit blustery, but the forecast was for 15 knots and hence I assumed that I would be sitting on the comfy cushions at the stern, sipping champagne. All that was missing was the bikini.

Hmmm….. right, that was not quite how it panned out. After hauling myself onboard, I was introduced to the rest of the crew and handed a big red buoy to help fend us off as we motored backward out of our mooring. I had wondered why we were heading out at 4.30 pm for a 6.10pm start. I was soon to find out why. “Right, you are on the port side genoa winch. Its electric, so pull in as much as you can and then tail the sheet and press the button. We are going to practice tacking and gybing so that everybody knows what they are doing.”

Gybing and tacking? You mean to tell me we are actually going to be racing? Apparently so. Out the window went my champagne sipping, sitting on comfy cushions out back.  On came the gloves, jacket to stay warm and a hair tie to keep annoying strands from getting in my line of sight.  The first attempt at operating the port side genoa winch was not very successful I have to admit. I am not used to electric winches and wanted to self-tail the sheet before pressing the button. Apparently, that is unnecessary as long as the sheet is wound around the winch and tension is maintained. Live and learn. So I was switched to the starboard side winch. 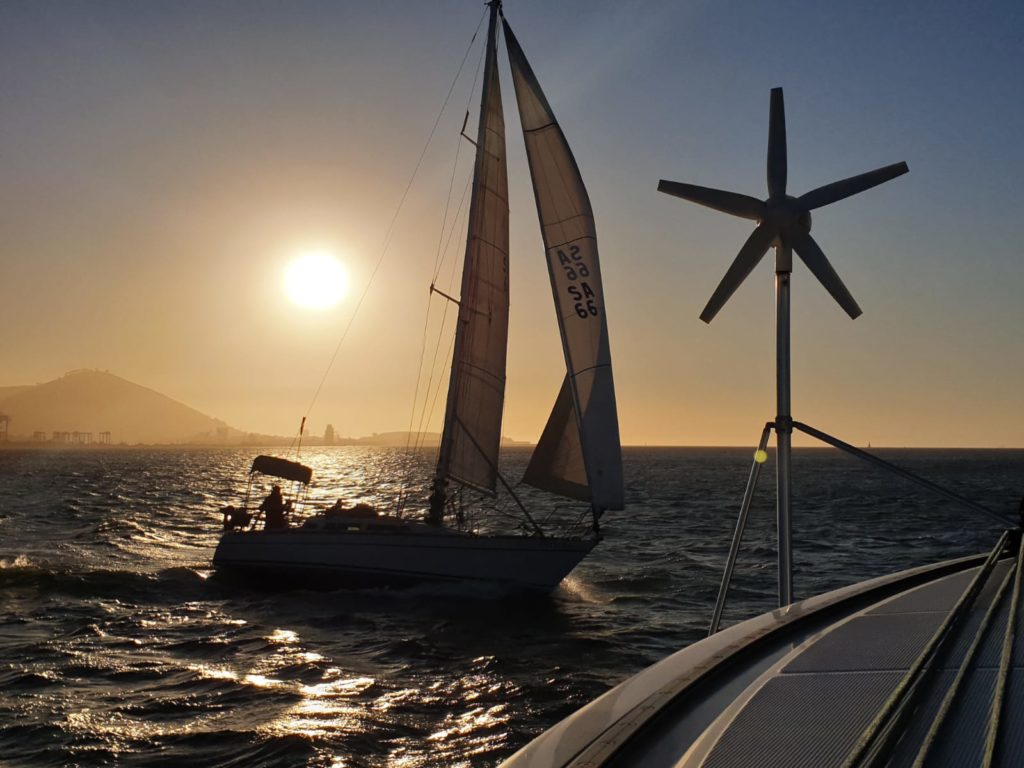 Ah now this I understood perfectly. Pull, tail, winch. The only additions that were new was that one needs to be careful where you stand so that you do not go overboard while winching and secondly that the sheet runs through a spinlock. I had never encountered one of those before, but after a bit of practice I got the hang of when to take the load off the spinlock before opening it and when to close it. The other interesting observation was that cats are not quite as manoeuvrable as a Cape 31 or a Compass 47 for that matter.

Sailing around before the start, when you are in the last class, makes for interesting times. Especially when a Cape 31 comes bearing down on you hidden behind a billowing sail. Even when in the right, rule wise, we had a few close calls, with boats that assume that we could quickly get out of their way. Meanwhile the wind had grown in strength and was hovering around 20 knots, with gusts making sailing interesting on the cat. Sensibly our skipper decided to reef the main, in itself not an easy process. 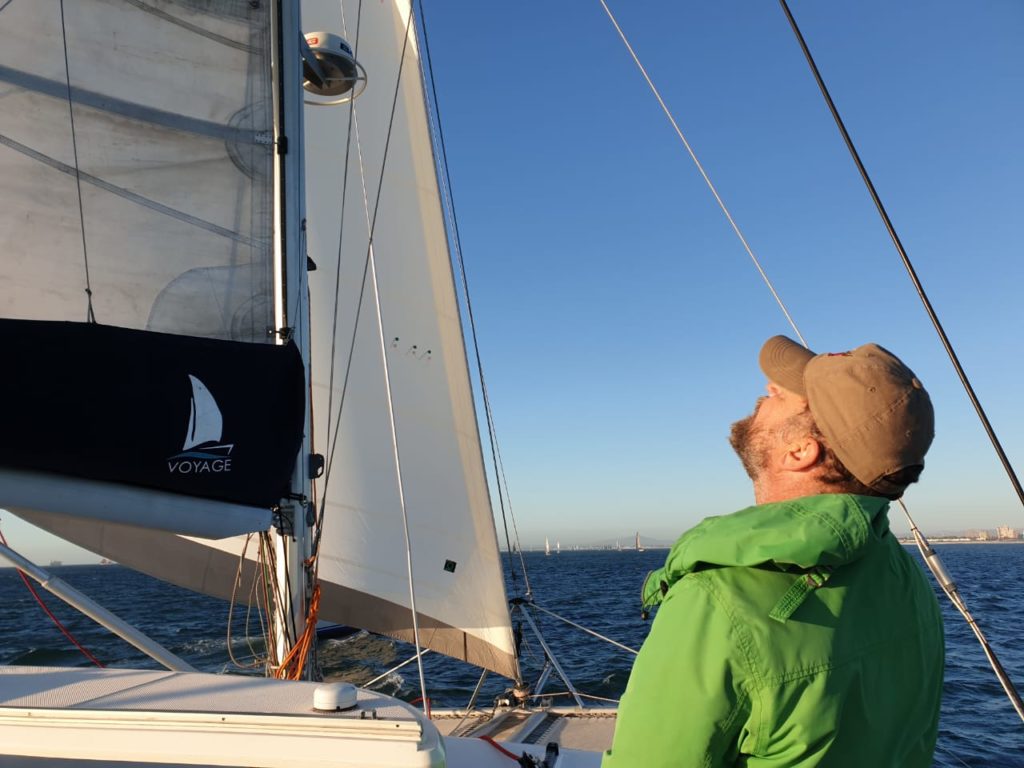 The genoa had to be furled in and I was roped in to assist. Then the main was lowered in ordered to set the reefing cringle. An interesting exercise in the gusting wind, but the crew knew what they were doing and shortly we were on our way again. Finally it was almost our turn to start. The countdown was on and with one minute to go we were in position, sailing down the line, with nr 10 looming ominously close. Just in time the countdown got to zero, the hooter blew, we tacked and flew over the line in the lead. Okay, so there were only two boats in our class, but I am a competitive girl and the lead is the lead.

What transpired next was quite incredible. We actually raced.  We raced properly and competitively.  Who knew that cruising cats can be racing machines. It was hard work as we tacked our way to Paarden Eiland and then down to Milnerton. Our gybe around the Milnerton mark, was slightly wide due to a safety line that got caught in a pulley on the mainsail sheet, but even with that hiccup, we were still in the lead, having actually passed a number of the boats competing in the class before us.

Sailing a bit low, meant we needed to tack in order to reach the Paarden Eiland buoy. The end was in sight and we had the bit between our teeth. All I can say is that our final tack around the mark was magnificent. Smooth as butter and it sent us flying down the home stretch. Near the wall the wind had subsided, but it mattered little, we were well in the lead and could not be beaten. It may only have been a cat and a cat with no official handicap, but the joy on that boat as the hooter sounded was indescribable. Fists went skyward as we celebrated. We had sailed hard, we had sailed well, and we had crossed the line in first. Nothing else mattered. 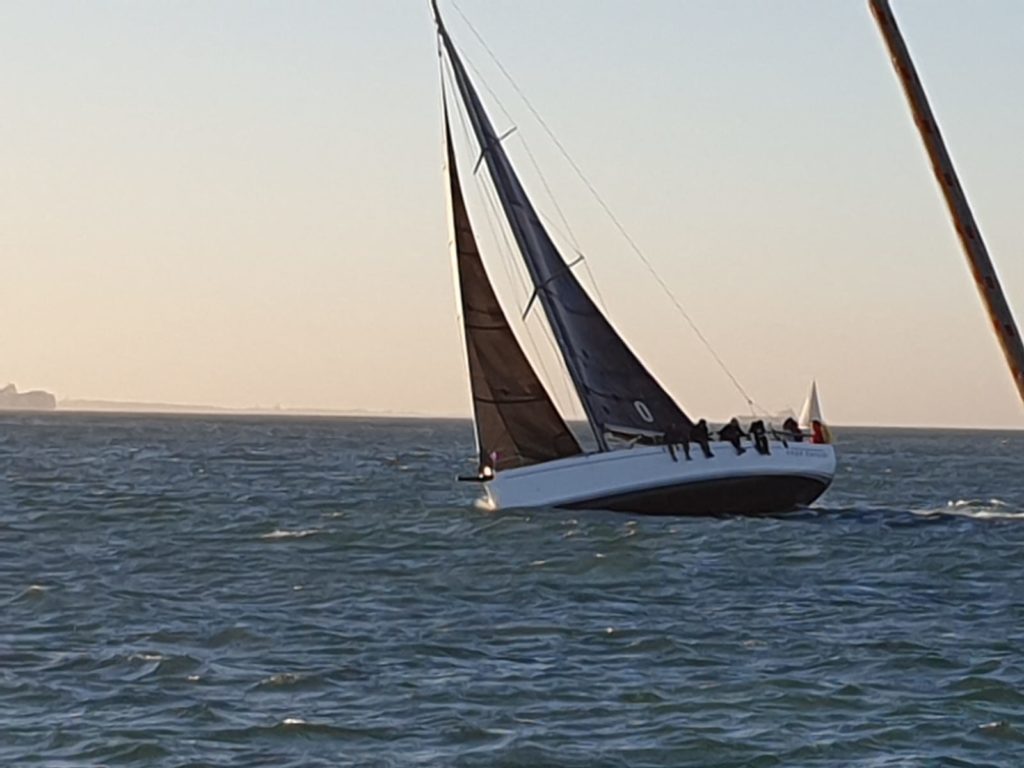 For the record the official winner was Derbigum. But back in the bar her skipper graciously accepted the ribbing for having been beaten by a catamaran. Also for the record I loved every minute of that sail. It was hard work, it was fun and it was competitive sailing. So next time you need crew on Amarula, Pete, I’m your girl! Cats are so much more than floating, champagne sipping platforms and I can highly recommend that if you haven’t raced on one yet, then you are missing out on something rather unique.

Saturday’s races felt far more like a summer series than a winter one. As the…

Would you like to serve on the RCYC Protest Committee from time to time? Part…