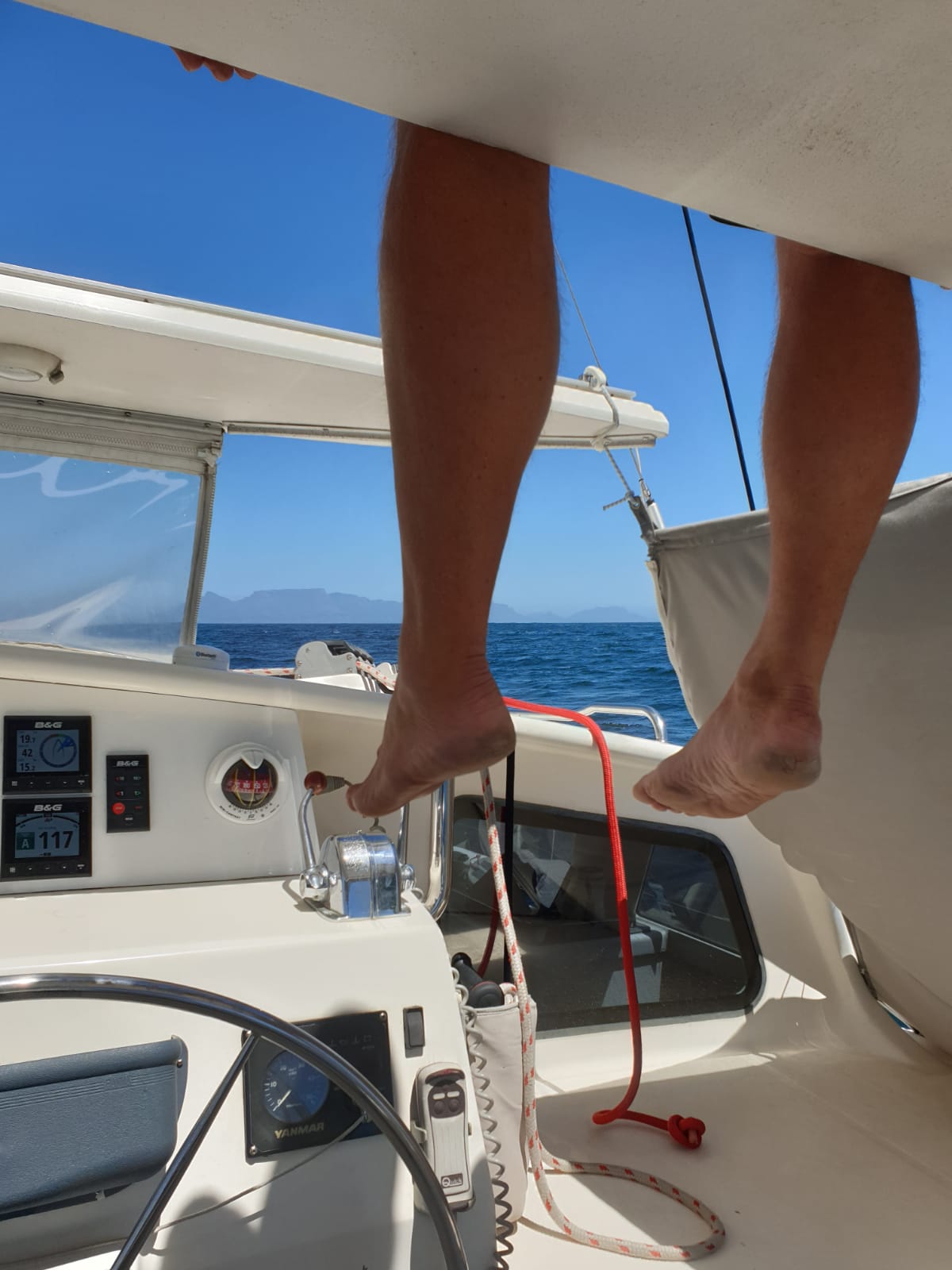 Cat adventures on the open sea  by Liesl King.

Guilty as charged I’m afraid. Not only have I gone over to the dark side, but it was beginning to look as if I might just be staying there. You see I was simply having too much fun! Not having to hike over the side and submerge oneself in the freezing Atlantic does indeed have its perks! I was ever so slowly falling in love with the uniqueness of racing a cat. Then I decided to help sail her back from Kraal Bay to Cape Town….

Now this is a trip I have done a couple of times before, delivering my lesson boat – that lovely Cape 31 back to RCYC after races. It is a beautiful sail and probably my favourite delivery route. Sails up, heading 180 degrees magnetic, watch out for whales, laugh at the antics of the dolphins, eat lots of chocolate and before you know it you have left Dassen and Robben Island to starboard and the mountain calls you home.  As easy as it is delightful.

With an early start I was invited to spend the night aboard Amarula. This in itself was probably worth far more than the actual sail back. Simply put, I have never slept on a boat before. Well, not unless you count a trip on a mail ship to the USA at age 6 months. It was something I had always wanted to experience and on a Cape 31 it wasn’t going to happen for obvious reasons. No, sleeping with the deck centimetres above your head squashed in between the engine and the hull does not count in my books. I wanted to be in a bunk, gently rocking at anchor. Not too much to ask was it?

The journey started with a trip up to the West Coast National Park. On arrival we were informed that yes, we may go to Kraal Bay, but no, we must sit in our car and not exit to the beach. Mmmm, not going to happen, sorry, but we diligently nodded our heads in agreement. Arriving at the beach, we find not just one lonely ranger, but at least four or five of them in attendance. Watching our every move as gear, food and drink pour out of the boot. Still they merely observe, that is until we start on the path down to the beach.

Thankfully for us Skipper was already on his way in the Rib and hence the rangers answered their own question. “Going to the house boats, are you?” While “yes” was not technically correct, it seemed the more prudent answer and thus we fully agreed. Loaded up, hopped in the rib and off we set. A lazy afternoon chatting and reading ensued, before drinks on a neighbouring boat and the obligatory braai rounded off the day. Time for bed. 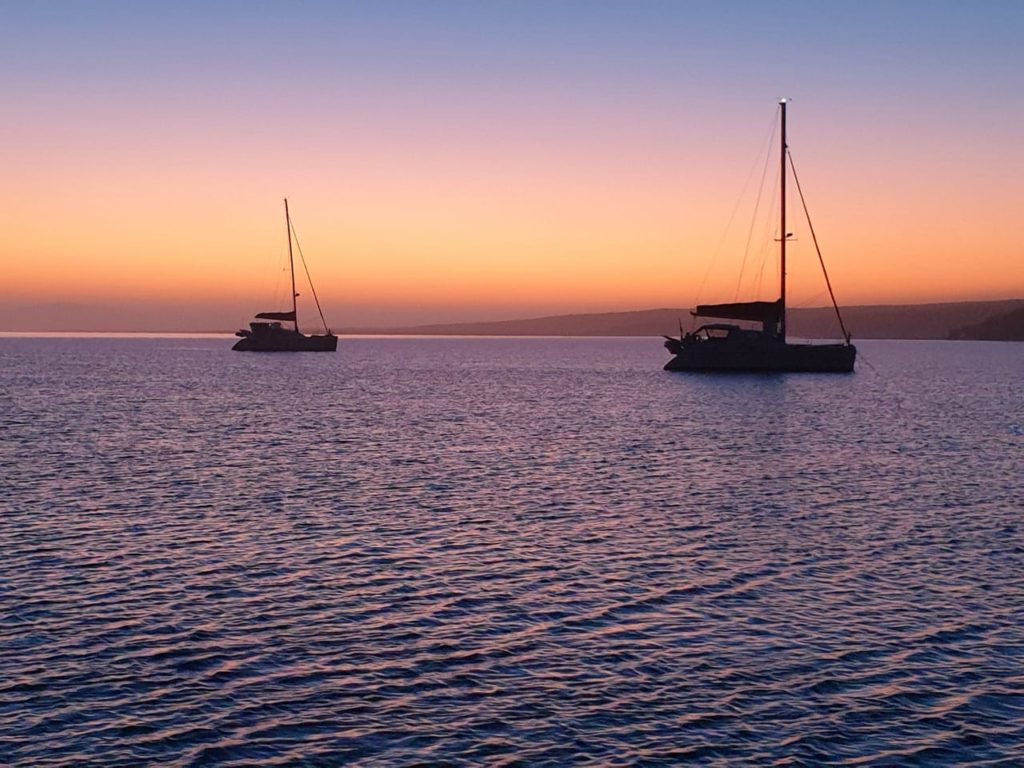 For the record, I loved sleeping on the water. Also for the record, while I often have to do it for deliveries, I am so not a morning person and these early departures are not my favourite. Still, when the engines switched on at 5am, the coffee machine simultaneously started producing wonderous cups of freshly ground coffee and all was forgiven. Coffee down the hatch and by 5.30am we were underway. There is something magical about the first light of day, the changing of the deep purple sky to a pink and finally to a deep burnt orange as the first rays lit up the water.

Ohana, a fellow cat, was returning with us and I managed to snap a memorable photo of her silhouetted next to the rising sun. The wind was light, the lagoon glassy and with Lisa steering we had time to admire the boats dotted around. All too soon Jutten Island appeared and with it the wind and the swells. Now the forecast was a Southerly changing to a South Easter during the day. I knew we were going to sail into a headwind all the way home, but still, how bad could it be? 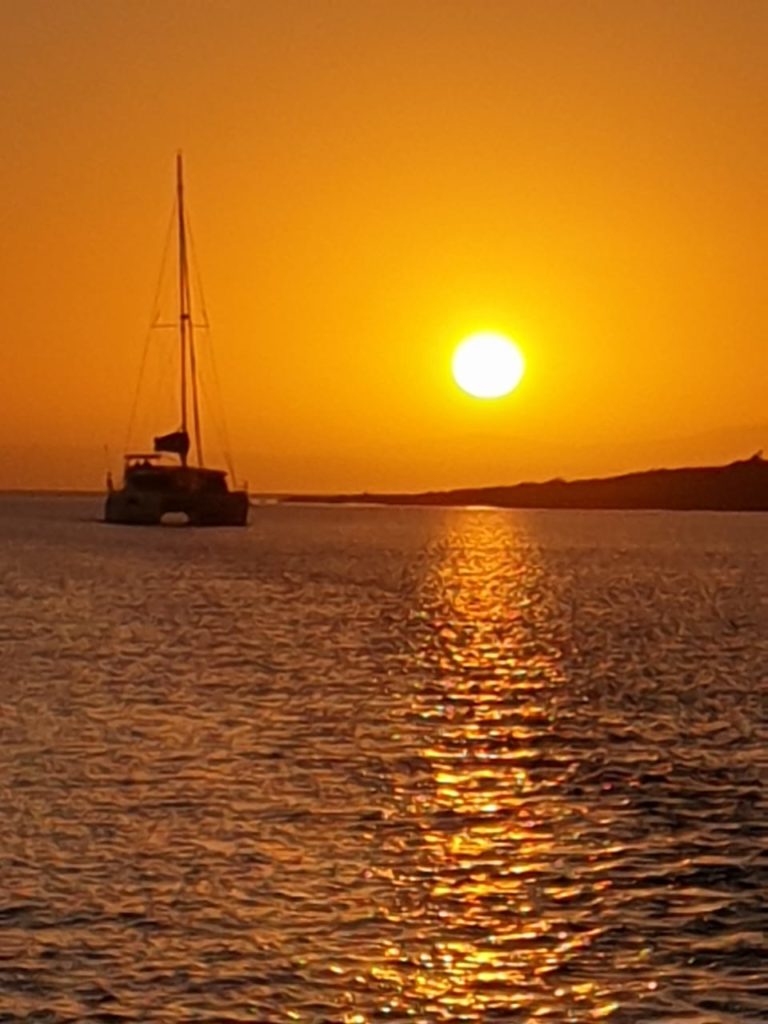 Breakfast of scrambled egg with chorizo, (thank you Kevin!), was amazing. I just wished I had eaten it 30 min earlier, when we were not bouncing up and down. Hanging on to your plate, whilst it is trying to leap off the table, doesn’t make for a leisurely breakfast. A lumpy sea was expected as we passed Jutten and headed out in to the open, but what I hadn’t quite expected, was that it would last pretty much all the way to Dassen and beyond.

Cats may not heel and mostly you don’t get wet, but they have the rocking horse motion perfected to a fine art. And just for fun, if the sea is obliging, they somehow manage to rock forwards and backwards, and from side to side all at the same time. Rather like a bucking horse, adding a corkscrew manoeuvre every now and again. Horses stop this nonsense quickly though, cats in lumpy seas, do not.  To add insult to injury the 15 plus knots were positively arctic, which meant despite several layers and polar fleece lined jacket, I was pretty much frozen the entire time.

On the plus side we had Cape Town Radio on channel 16 as entertainment. Trust me, there is much merit to be had in listening in when you are out near the West Coast. It wasn’t long before we had the delightful battle of wits between the Daniela Melissa and the polite (mostly) voice of Cape Town Radio. It began with a radio call to Daniela Melissa. I was intrigued as it is an unusually pretty name for a commercial vessel. Could it be a yacht, I wondered? Whatever it was though, she wasn’t responding. Several fruitless calls later, the radio man decided to get hold of a ship in her vicinity. “Daniela Melissa is about two miles north of you, please can you call the captain and get him to call us.” 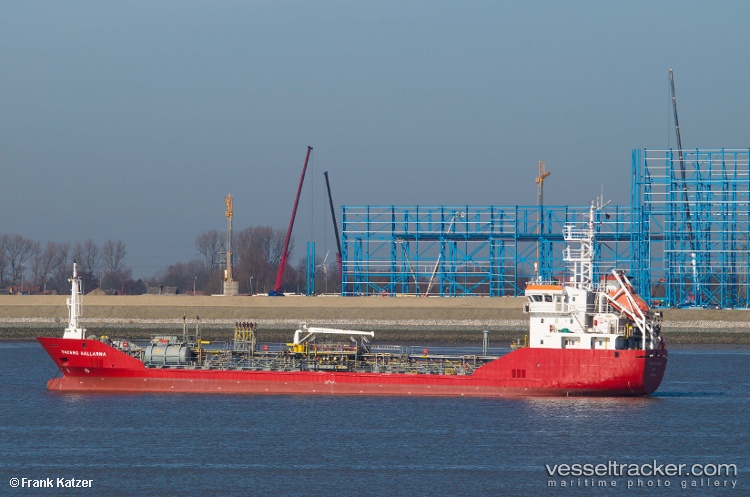 Magically Daniela Melissa surfaces and calls in, only to be told that she must immediately lift her anchor and depart from St Helena Bay as she may under no circumstances anchor there. So far pretty routine and then the fun started. For about five hours we listened to every excuse in the book as to why the Daniela Melissa could not move. They were waiting for stores, then the engine had a problem, then it was working but would not reach Cape Town. No they didn’t have an agent in South Africa. On and on it went. Eventually it was decided that an email would be sent to the captain. Have you ever heard a very long email address spelt out phonetically over the radio without static and loss of transmission? Neither have we. Needless to say, by the time we reached Robben Island some 10 hours later, the Daniela Melissa was still in St Helena Bay.

Whilst the battle of ‘will she, won’t she’ was being played out, we were still rocking on the waves. Skipper had decided early on that auto pilot was the least tiring given the sea state, which meant we could rock to some music while watching out for whales and crayfish pots. If you have never heard of the Tedeschi Trucks Band, don’t feel alone, neither had I. But you should. It is a delightful mixture of country/blues/jazz that even had the whales come up close and personal to listen. At least that’s what I was telling myself the two Southern Right Whales to starboard were doing, as they accompanied us almost within touching distance. 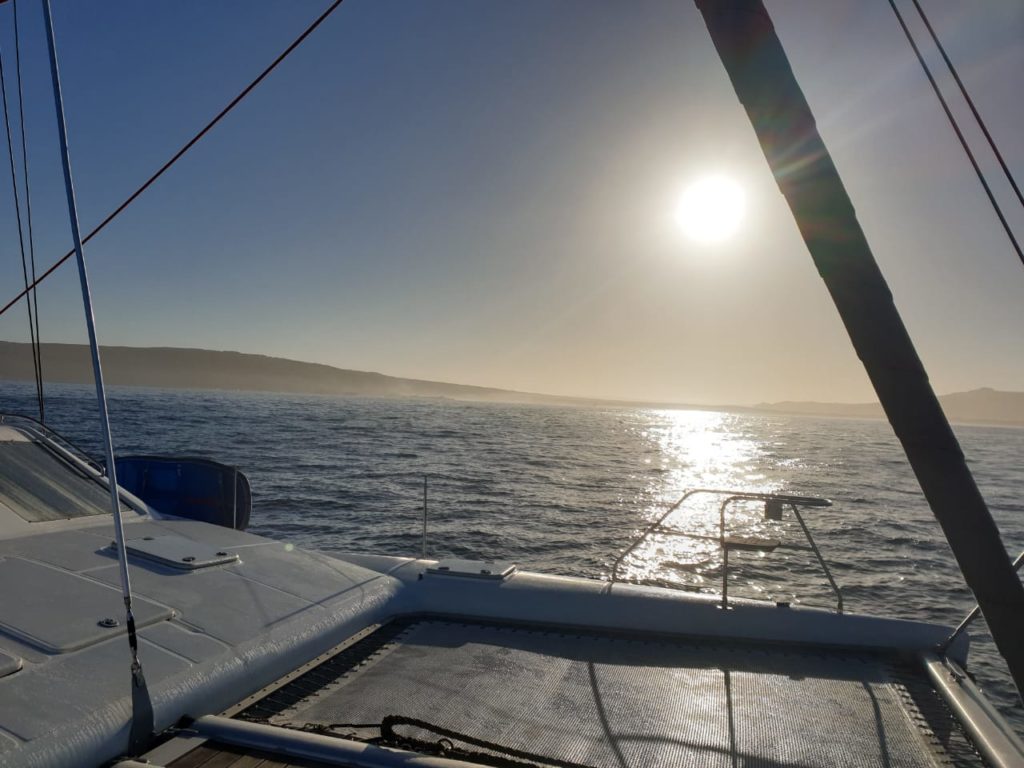 Leaving Dassen and Robben Island to port meant we had a perfect forty degree relative wind angle, but we also encountered long lines of crayfish pots, which meant a lengthy detour and the ominous wind shadow of Table Mountain. We sailed in a variety of winds coming from at least three or four different directions and at speeds from three to twenty knots. It kept me busy on my starboard winch as we tacked for crayfish pots, whales, and changes in wind. Eventually the wind was so confused that after furling and unfurling the genoa twice as our speed yo-yoed, skipper gave up and we dropped the main and motored in. 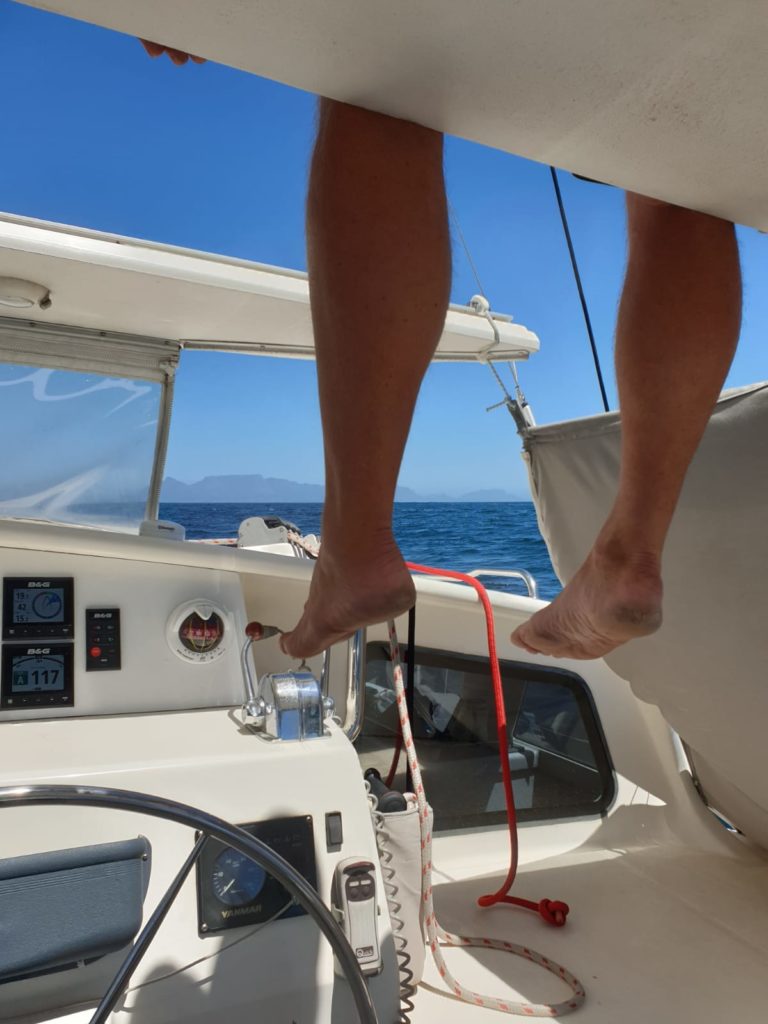 Autopilot on, Skipper on lookout

Seventy nautical miles and eleven hours later we were home. It was long, bumpy and cold. It was also entertaining, thrilling and an experience I will never forget.  The ocean outside of the bay is an unpredictable, yet magical place and I simply cannot get enough of it. Cat delivery anyone? PS the Daniela Melissa turned out to be a bunkering tanker, currently anchored off Laaiplek. I wonder how that conversation is going?

Dear Members, Following the notice from the Commodore in last week’s newsletter Easing the impact…