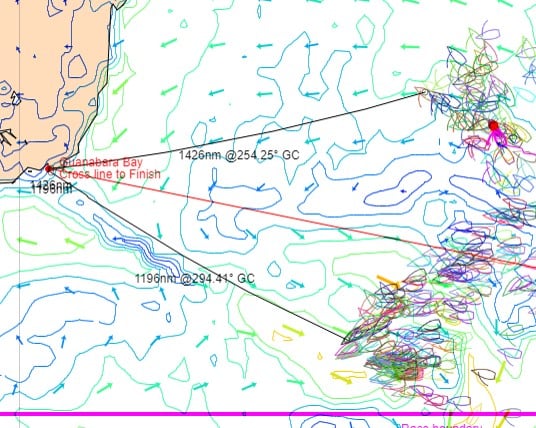 At approximately 13h48 UTC, in a still to be ratified time of 11 days, 1 hour and 48 min, the South African SOLer Henrys crossed the line after a titanic battle with his Italian counterpart Cippalippa (ITA).  The dying hours of their race had been plagued by a decreasing breeze as they transitioned from the fresh NE 30 miles away. Henrys was sailed by South African Henry Snoek, a resident of Velddrift.

Virtual sailing creates an amazing opportunity for family rivalry and collaboration. Bragging rights become paramount and the Cape2Rio Virtual Race 2021 was no different.  Sailing their C2R74 virtual boats, there was a fierce rivalry taking place between race leader Henrys and his brother Jawz, who introduced him to the sailing platform.  Both egg each other on and take vicarious pleasure from the nip and tuck of ocean racing.

The Royal Cape Yacht Club, Iate Clube do Rio de Janiero, Sailonline and Mark Mills Design
would like to congratulate Henry Snoek and the other podium finishers on their achievement.  The top ten competitors all finished within 12 miles of each other, while the remainder of the 346 boat fleet continue to fight for positions as the race goes on….

Meanwhile Henry, a long time virtual sailor, who admits to very little real life sailing experience, was delighted. “What a win, what a win. I am on cloud nine. The last 24 hrs!

It is traditional to pick up the strong winds north, so, I started out of Cape Town to get to them soon. Then I rode them and watched the weather. While I was looking at the weather predictor the weather started changing 6 days ahead. I Qt’d a route and Qt said move south now. I checked the weather for the finishing to Rio and it was blue, so I told my wife whatever happens, happens. I did not trust the northern route, so I went south. At  that point my feeling was “a race is a race, enjoy it”.

“I am not  so much “a person who enjoys winning”. At  one point I wanted to set Qt’s route and forget about it, until Jawz spoke to me.  He just came out with “win” enthusiasm. He encouraged me the rest of the way. Continuously  pushing. For which I am grateful. I ended up in a battle for 1st with Cippalippa and this battle continued until the finish line.

“The last 12 hours I hung in there waiting for the usual SOLers to take it away, but it did not happen.  Too many had been in the washing machine. This morning I’d had it. I slept and woke up to Cippa‘s change. From then on I was fixed to the PC.  Man was I stressed. Two hours before the end I was shaking. Then I sat on him. I decided to do so. So that I was always with him. I think Qt had a better ending prediction, but just in case I matched his moves. The last hour I even missed a dialysis exchange.

“I enjoyed the Polar ” C2R74″ for its 40 degrees tacking angle, which I never got to use. My route was mainly running with wind. It’s a smooth polar.  If the wind is 20 knots you get 20 knots through the range, except for low speeds, which I like, because you get more than the wind speed. I hate it if I get stuck in low winds.  It’s not just slow but swirling too. I have a short rule “If you run with wind at 20 knots multiply by 0.7 to get actual speed” and tacking is normally 0.55 of your speed.

“However the last 6 hours of the race we were able to ride the wind and use the polar to get the best angles out, it was great. If we were not where we were, then we would have needed to fight for better use of the Polar. I could see the result.  Some polars have blips in the performance, where you need to do polar jumps and if you are not watching then you penalise your speed. In some races the polars are just not right for the race or for the conditions and not enjoyable.

“In Real Life (IRL) you get to know your polar’s performance points, like 2nd nature. You read the winds. You get to hear all the noises and feel the boat. The last 4 hours were complete attention, as I was matching Cippa‘s changes. It was intense concentration. Ten days now, NO mistakes. 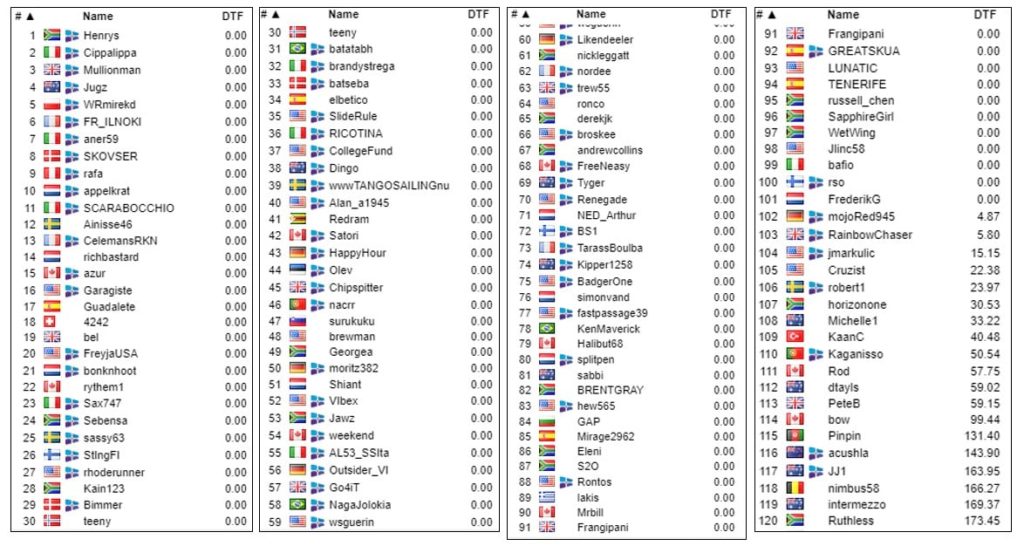 “The best part about this win is winning in front of 88 “newbie” Sailors to the club. To show it can be done and that it is enjoyable to race “on-line”.  There was a large contingent of IRL sailors as well, “who can teach me a thing or plenty”, who joined in. I thank them for sharing this experience with us, I hope they stay to enrich our ranks and continue to support Sailing Online (SOL).

“We appreciate their recognition of our club. I feel proud to win this race in the presence of so many great esteemed Sailors and SOLers. I feel humbled and honoured to sail next to them.  I will still be a member next year and the following, if it is so wished.

I want to thank George (Jawz) my brother, for introducing me to SOL, and for his continuous support. I also want to thank Joanna and the team from SOL for their unselfish efforts in bringing about all these races.”

Phillippa Hutton-Squire with skipper Juliette Petres.   Phillippa & Juliette are currently racing in the…

BLAST FROM THE PAST | ROYAL FLUSH

Blast from the Past - Royal Flush, by Liesl King I usually find ideas for…