Stormy – The last of the Bruynzeel boats, by Liesl King and Richard Crockett. 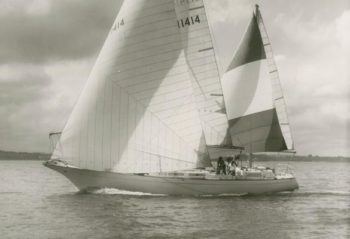 In May 2019, well known sailing journalist Richard Crockett featured the last of the Kees Bruynzeel boats, the famous Stormy, in Sailing Magazine SA.  Of the three boats that Bruynzeel is most known for, Zeeslang, Stormvogel and Stormy, the latter is the one with the strongest ties to the RCYC through her participation in the iconic Cape to Rio Race.   A 52ft Van de Stadt design, Stormy was built in 1968 with the same cold moulded ply as Stormvogel.

Bruynzeel skippered Stormy to third overall and second place in Class II in the inaugural Cape to Rio Race in 1971. After a series of heart attacks the previous year, he was back in 1973 , aged 72 and with a nursing sister trained in heart emergencies onboard, to take line honours as well as handicap honours with Stormy, in a time of 21 days, 15 hours and 13 minutes. Race favourite Ondine, skippered by Huey Long retired after 21 days. I can only imagine that this victory was doubly special, as Ondine and Long were old adversaries of Buynzeel, their skirmishes dating back to the famous duels between her and Stormvogel in the 1960’s.

Richard Crockett takes up the story of Stormy: 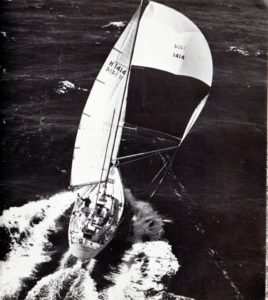 ‘Stormy’ was skippered by Cornelis ‘Kees’ Bruynzeel, and over time her reputation as a fine ocean racer became legendary, as did her skipper who died aboard ‘Stormy’ during a race in the Mediterranean in 1980.

She has changed hands several times, was renamed ‘Lady Margaret’ by one owner, and has undergone several modifications, including an aluminium bolt-on stern extension!

Just recently I heard from Dudley Dix that she has, for a very long time, been languishing in a garden only about 5 miles from where he lives in Virginia Beach, Virginia USA.

The well-meaning owner was restoring her, but advancing age brought that to a halt. Instigated by Ian Knipe and Bruce Tedder, we tried to get her back to South Africa for the completion of her restoration, but were unsuccessful” said Dix.

“I have done a quick inspection of her laminated wood hull and it appears to be very sound, aside from a couple of small patches of superficial rot where some water has been allowed to lie. She has been redecked except that the cockpit has been left for rebuilding after the interior and engine work are completed.

“All of her seems to be there. The structural interior is still in place, all loose interior items are stored inside the owner’s home. He has a newer engine to replace her old one, as well as a generator and loads of teak that was planned to be laid over the fibreglass-sheathed plywood deck.

“’She is available to go free to a good home where she can be completed and go sailing again. The new engine, generator and teak are not included free, but can be bought for a reasonable price that must be negotiated with the current owner. Removing and relocating her and all the materials and equipment must be paid for by whoever takes over ownership. 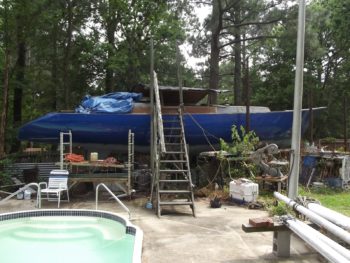 These are seaworthy, strong and weatherly ocean voyagers. ‘Stormy’ deserves another chance at ocean voyaging, not to die somewhere in a breaker’s yard.”

Dix continued to try to find someone to take over her custodianship in the USA and eventually got agreement from Wooden Boat magazine to carry a one-page article about her plight. It was successful and he reported that she now has a new owner, from South Carolina. “I hope that this will get her back into restoration mode and onto the water again. She is such a beautiful boat with good history and lineage that I didn’t want to see her end up in pieces in a breaker’s yard” he said.

Two years later the fate of Stormy is largely unknown and she may still be languishing in that Virginia Beach garden. I am however hopeful that her new owner is indeed busy with the mammoth task of restoring her. With her legendary reputation coupled with the story of her owner, the visionary boatbuilder and keen yachtsman, Kees Bruynzeel, she surely deserves to be back on the water, racing again. With Stormvogel competing in the Fastnet Race this year, just think how amazing it would be if Stormy lined up once more in the 2023 Cape to Rio race?

Last Friday night’s lucky winner was Mr Hasso Plattner, who was unfortunately not present to claim…