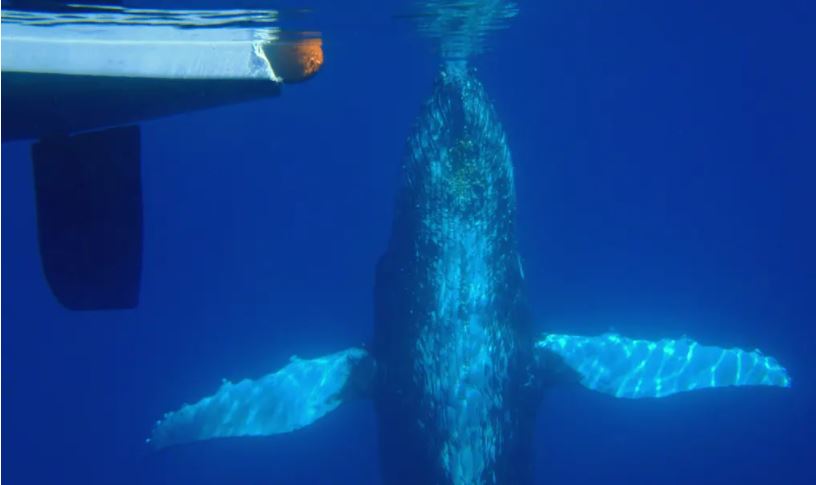 At 83 Jennifer Webb, the last remaining crew member of the ill-fated Pionier, remembers the sinking of the yacht and what ensued, as if it happened yesterday.  It is not so much the actual incident that stuck in her mind, but the unexpected reality of getting off a sinking boat, what one takes with and the unexpected difficulties of life in a raft.

“We were up to our waists in water at the end of it and I remember boxes of eggs floating past. You just grab and throw what you can into the raft. One of the crew was hanging on to the life raft and he was just receiving everything that we could throw at him. It was a case of grab what you can and throw it in as we didn’t have very long before we had to get into the life raft.

“Space in the raft quickly became a problem. We soon discovered that a six man raft is not really designed for six men to live in for any length of time. So we decided that the next time we sink, we are going to have two life rafts. One for the day and one for the night. It was very uncomfortable as most six man life rafts are designed to be occupied for 24 hours in the English Channel or while you wait for the rescue boat to get to you. But with five of us in the raft and one being quite a tall man, we had to have our legs on top of one another.

“Now, men hate to sit with their legs straight out. Us woman can do it more easily, but men don’t like that. So the one whose legs were at the bottom could only take it for so long and then we would have to swop. We were very close together in the raft and it was very hot.  It was about 90 odd degrees Fahrenheit, and you are squashed up against the guy next to you.  You can feel his sweat and your sweat trickling down between you. One never thinks of the practicalities of being squashed in a raft.”

Thus having been through the whole experience, Gordon and Jennifer wrote an article on the practicalities of life in a life raft and what they would change in their preparation for another long distance race. “Staying alive in a life raft” is our final episode in the tale of Pionier and her sinking, after a collision with a whale some fifty years ago. I think it is worthwhile reading, for each and every one of us who venture out onto the open seas, full knowing what danger it holds, but always thinking that the chances of something catastrophic happening to us is rather remote.

Staying Alive in a Life Raft – Gordon and Jennifer Webb 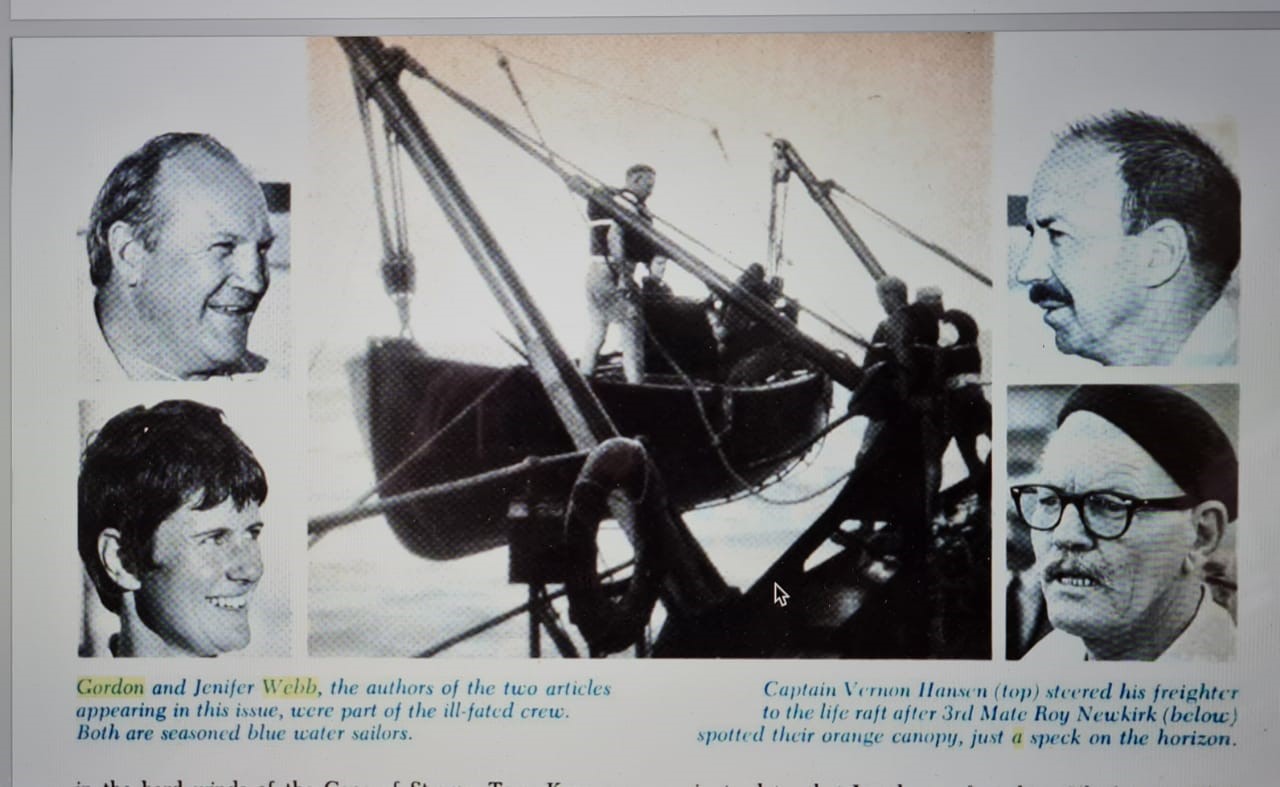 To be sunk by a whale is a unique experience and one not to be repeated, we hope. However, from every experience there is something to be learned. Although our period as shipwrecked mariners was incredibly short, it gave us time both then and afterwards to do some thinking and perhaps our experiences can help others who one day find themselves in a similar position.

Many of us have been guilty of considering our yachts as perfectly seaworthy and as good as a lifeboat, but are they? Years ago some yacht race organisers have and still do, insist on yachts carrying a dinghy on board. We did not call for this in the Cape Town to Rio race mainly because, apart from getting ashore to the nearest pub at the beginning or end of a race, in calm waters they have little or no use. Indeed, as yachts get smaller, they are more of a danger on board. They present stowing problems, restrict working deck space and are a hazard in bad weather.

The inflatable life rafts, now practically universally required, are a wonderful invention and a credit to their manufacturers. But there are many types, and some are not up to standard.  The food and water supplies in these rafts may be sufficient for a disaster in the English Channel or on a well- frequented coastline but for ocean crossings certainly woefully insufficient.

Due to the failure of one of our water tanks a few days before the sinking, we had not emptied all the water we had been obliged to carry in five-gallon plastic containers. This was of great significance as we thus had some 30 gallons of water, which would have kept us alive for some time.

On any ocean passages accessible water supplies should be kept ready for any emergency. Once in the raft the plastic containers full of fresh water can be towed – fresh water is lighter than saltwater. There is no time to fill containers in these circumstances. Also, a carefully thought-out emergency pack should be ready to hand.

We plan to carry a single, medium-size kitbag on future voyages. This pack will contain sufficient iron rations for the crew for about four weeks. We also slip in a spoon and a fairly large mug, a pack of cards and some other compact games to provide for mental diversion which is essential and plays a large role in the survival powers of an individual.  A pair of flexible, unbreakable sunglasses and equipment to rig a fishing net, some extra line and assorted fishing hooks will also be packed. We found clothes pegs surprisingly useful.

There is normally a medical pack on the raft, but the following are considered by one of our “medical yachtsmen” to be invaluable additions: salt tablets, a broad spectrum antibiotic in tablet form, tranquilizers, a good sunburn and lip cream, 6 capsules of morphia, an elastic bandage and a roll of Elastotape, a general purpose healing cream, seasick tablets, multivitamin tablets and aspirin.

One of our major concerns was whether we would remain strong enough to lift our freshwater containers towing along with us in the sea. A two foot length of thin plastic tube would be ideal for sucking water from the containers until they were light enough to lift easily. One could no doubt make this list much longer. However, as these catastrophies are comparatively rare in sailing boats, one cannot spend all one’s time planning for disaster. With water and an “abandon ship bag” at the ready, the crew will have more time to collect clothing and extra food, and perhaps have another go at saving the ship.

Naturally it is an ever increasing battle for yachtsmen to keep fitting out costs to some semblance of normality, but for any prolonged stay in a life raft, the size is very important. Ours was a 6-man raft and we were five, but I would suggest the term “6 man” refers to the buoyancy capacity and not the space requirements.

We found ourselves very cramped and lying down, with all the other legs crisscrossed over one’s own, was only bearable for about 30 minutes. I f we had been there longer we would probably have had two sitting on the outer edge of the raft at a time, while three stretched out.  Although the raft contained many useful items, surprisingly there was no fishing gear or small net to catch the little curious fish that swam around. These are not costly items nor bulky and should have been included.

In a subsequent conversation with a doctor, he advised that if food was available, swimming for a few minutes could be very beneficial, as it would stimulate the circulation and boost the morale. It is essential to try and keep the body in some sort of trim despite the cramped conditions. Clothing is also very important. Tony Keeney was the only one who thought of this and it was just as well he did. The one sleeping bag was a godsend – it was the type that zips completely open so could cover us all. During the hot daytime we draped this over the canopy as the thin orange material allowed too much heat through it.

This made life a lot more bearable, but Willie worried that its dark blue colour would restrict the visibility of the raft. While others preferred the comfort, the Potomac had sighted the orange coloured top at almost three miles distance when it must have been a very small object indeed. There were no daylight smoke flares in the raft. Willie had thrown one into it, but we had left many on board. Our flares and smoke signals had been restowed when at sea and he had not been informed or may not have remembered the new stowage place. It is always a problem on small boats to keep everything handy and in the same place, but mistakes like this can be serious.

Captain Hansen and Mr Newkirk had both said that the smoke signal we released was very effective. The raft had been sighted rising on a swell, but it was not known what it was. When the Captain arrived on the bridge, he could not sight the raft, but when the smoke signal went off a broad orange haze spread over the sea and he said it was impossible to miss. This was reassuring as we had been disappointed in its effect.

Since our experiences we feel that all sailing crews should have a planned emergency procedure in case of disaster – ships do this automatically – yachtsmen usually scoff at the idea. From my years at sea and sailing, I considered myself experienced, but this was very much a new situation for me. Whales are going to become more plentiful, and many were sighted by yachts during the race. At the same time as our mishap, a German wooden cruising yacht of about the same size, sailing in the Pacific, struck a whale unseen in daylight and sank. Her crew was picked up after 24 days.

Remember – It can happen to you!

Keep up to date with the Positioning Reports for Cape2Rio