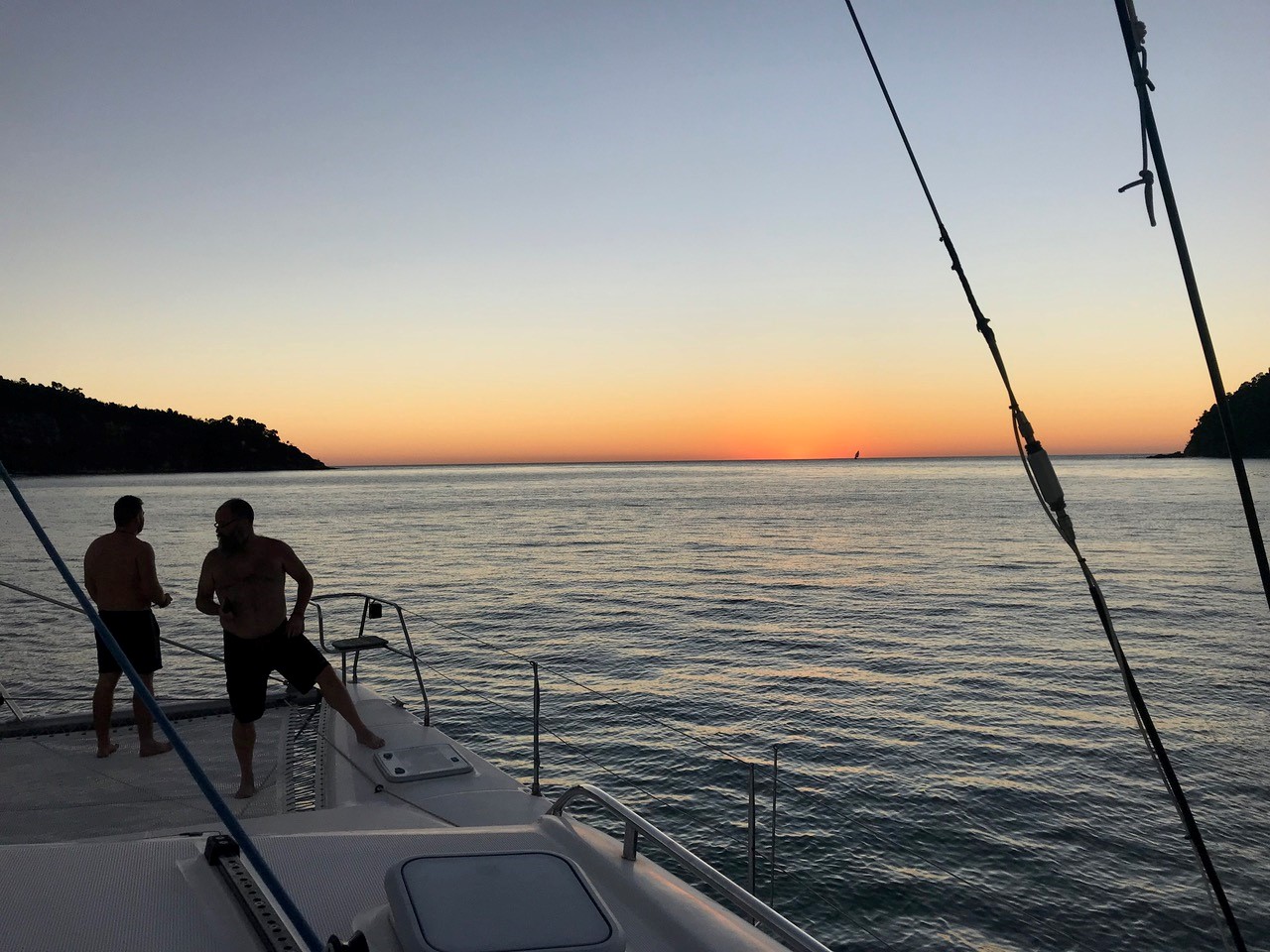 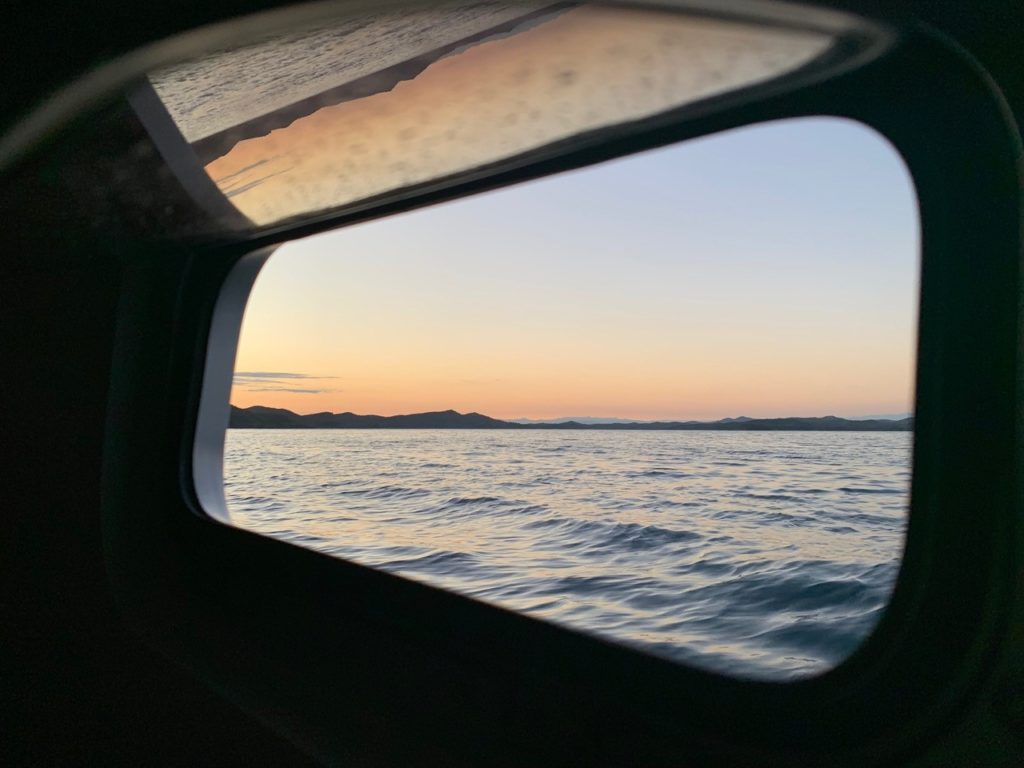 Adéle had her head in her hands. Her shoulders shook as she sobbed. Her mascara ran down her face in a dark stain, a grey smudge in the river of tears that swept down her cheeks. She was absolutely and wholeheartedly distraught. Rosie was holding back her tears, trying to console her mother and hand out tissues as each one only lasted a few short sniffs, all the while pushing her forward away from me. The security woman watching from behind the body scanner as the girls passed through seemed grateful that there was no red buzzer or alarm as Adéle’s crying would make any physical search awkward. You could hear a pin drop in the airport departures area except for the tears and sniffs as the girls shuffled their way through the security check.

My heart lay shattered. My girls were just out of reach and inconsolable. The security woman stood up and ambled over to me as though she had to move to make sure I did not rush into the secure area to help my girls. Instead it was a poor disguise for her curiosity. I was waving and trying bravely to smile but inside I was a wreck. The security woman looked at me and asked who had died, was it a family member? It made me smile, which confused her even more. No, I said, that was my wife and she was broken hearted because she was returning home after an adventure of a lifetime. She had to be patient and wait for me to sail our boat all the way back to South Africa before she could hold me again.

And just like that our family Madagascan adventure was over. A year of planning, an eventful double start to the crossing and 3 months of blue and island style, of coco locos and white sand beaches, turtles and THB’s (Three Horses Beer) was now only present as a fresh memory, so fresh that if you closed you eyes you could still smell the intoxicating odour of all that is tropical. 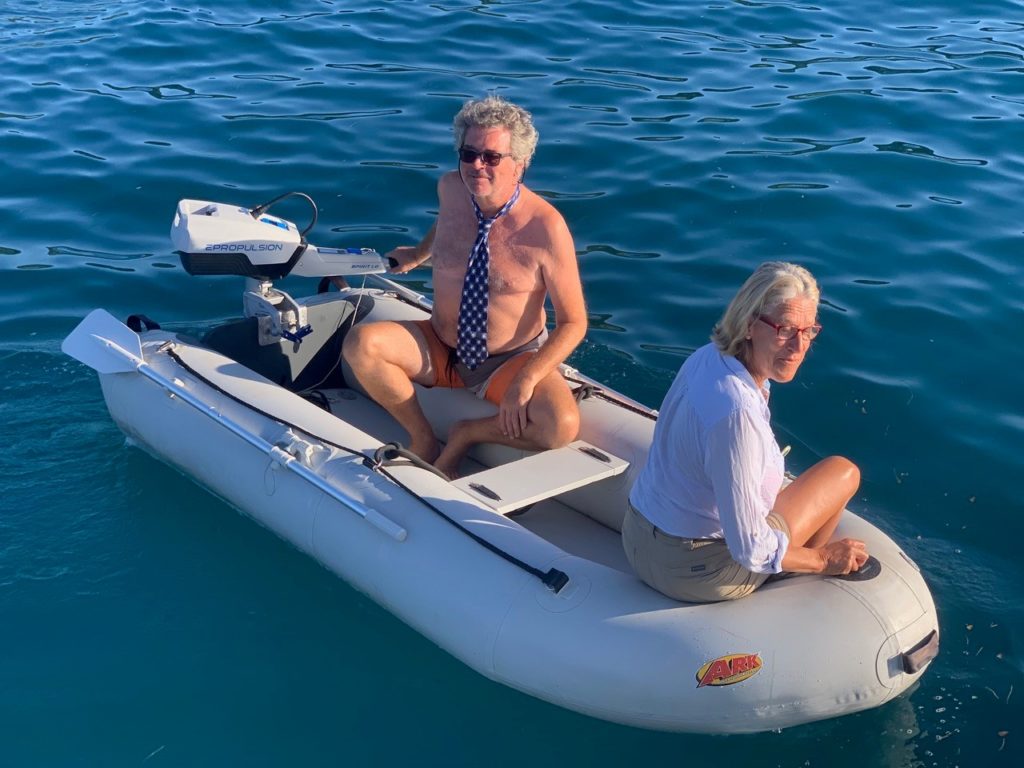 Irma and Kevin approach to wish us bon voyage. Kevin was dressed formally for the occasion!

As Adéle and Rosie waved a final goodbye and moved beyond my vision I heaved a sigh of relief that they would be home safe and sound in a few hours. I on the other hand still had an adventure beckoning, I still had an ocean to cross and a crew to collect around the corner at the arrivals terminal.

Bob (our original First Mate) and Chris (a recently graduated Yacht Master looking for miles) were hopefully somewhere in the queue at the arrivals counter, having disembarked on the same jet that Adéle and Rosie were about to board. They were to join me in sailing south down Madagascar’s coast until we dared jump off and head south west (using the south easterly trades), until we were drawn into the north easterly trades blowing down the Mozambique coast and taking us on a downwind and following seas jaunt back to Richards Bay.  That was the plan at least.

Excitement was fever pitch as Bob and Chris crammed into the bakkie with me. We were to provision on the way back to Crater Bay and Amarula, purchase and top up sim cards, draw some cash at the ATM and stock up on the lovely Dzama rum. It was a bit of a melancholic provision for me as it was the first without family and I must admit I had a lump in my throat as we walked the aisles in the Leader Price Supermarket. Bob was the new head chef and so he decided what was to be pulled from the shelves. He is an amazing cook and I was quite relieved that he would take charge in this department as I would have my hands full on the crossing. 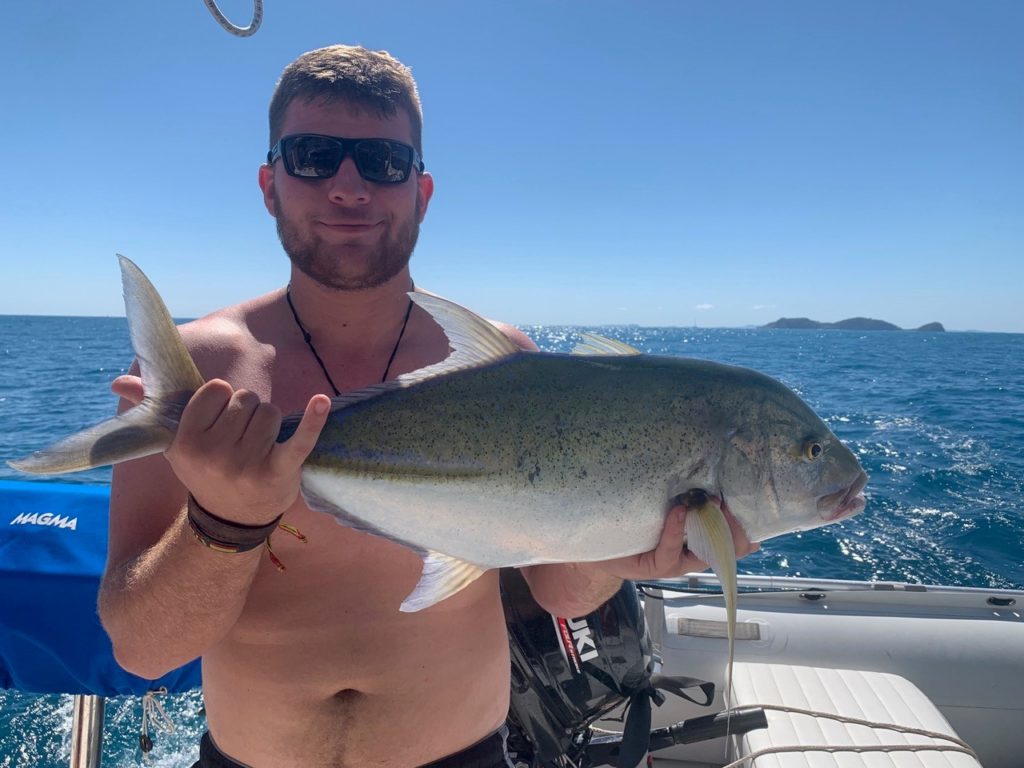 Our first fish a few hours out from Russian Bay

We arrived back at the marina just before dark and had to quickly transport and pack away as we were due to have a farewell party at the Marina restaurant that night with all the buddy boats and people we had met whilst in Madagascar. Bob and Chris quickly fell in to the routine of the tender ride and provision run. It was not long before we were provisioned and Bob was familiar with the stores. Adéle had left a detailed note for him along with strict instructions to follow regarding hygiene! She knew us boys too well.

Soon we were all seated around a table at the Marina Pizzeria, about twenty of us. Richard (our Malgasy Fixer and magician of all things boating and now dear friend) had also arrived, making the trip especially all the way from Sakatia. The evening passed by in a blur, no doubt helped along by the rum tasting and happy faces. Tomorrow (Monday) Abundant Life and Amarula check out and head south.

Monday morning was not easy. That first coffee did little to dissipate the last vestiges of rum still rolling around internally and legs were certainly wobbly but eventually we made it to the tuk – tuk and completed the journey to Hellville and the harbour where customs and immigration sat. Once we had completed these formalities we had to clear out with the harbour master and pay a small fee. Unfortunately the Immigration officer (a female) refused to help us unless we paid a “cadeau” (gift). I was not in any mood to deal with a rather expensive gift of Dollars that this woman was demanding. It really was a blight on the otherwise exemplary service we had received from the officials in Madagascar and certainly a very different experience from the welcome we had when we cleared in. I believe this is an ongoing issue as the same woman had asked us for a “gift” when we cleared out in 2017. The officials need to attend to this as it really does become an issue for visiting cruisers.

Finally we were checked out and I had left a trail of rum scented sweat from the immigration container to the harbour masters office courtesy of my raised blood pressure on dealing with the “cadeau” issue. The Harbour Master was the compete antithesis, officious and efficient complete with a form showing how the checkout fee was reached. It was a very small charge and once our outbound papers were stamped we had 48 hours to depart or repeat the check out procedure.

We certainly had no intention to repeat it and so we set sail for Russian Bay to overnight. It was a beautiful sail across the Bay and my heart was heavy as I reminisced about doing the same crossing with my family. Chris and Bob were fantastic on the boat and their excitement and enthusiasm soon rubbed off on me and we turned up the music and sung our hearts out to “Comfortly Numb” as Amarula effortlessly slid across the gentle swell, her sails full and her mission exact. I am sure Pink Floyd heaved a sigh of relief as the song ended and another started…… 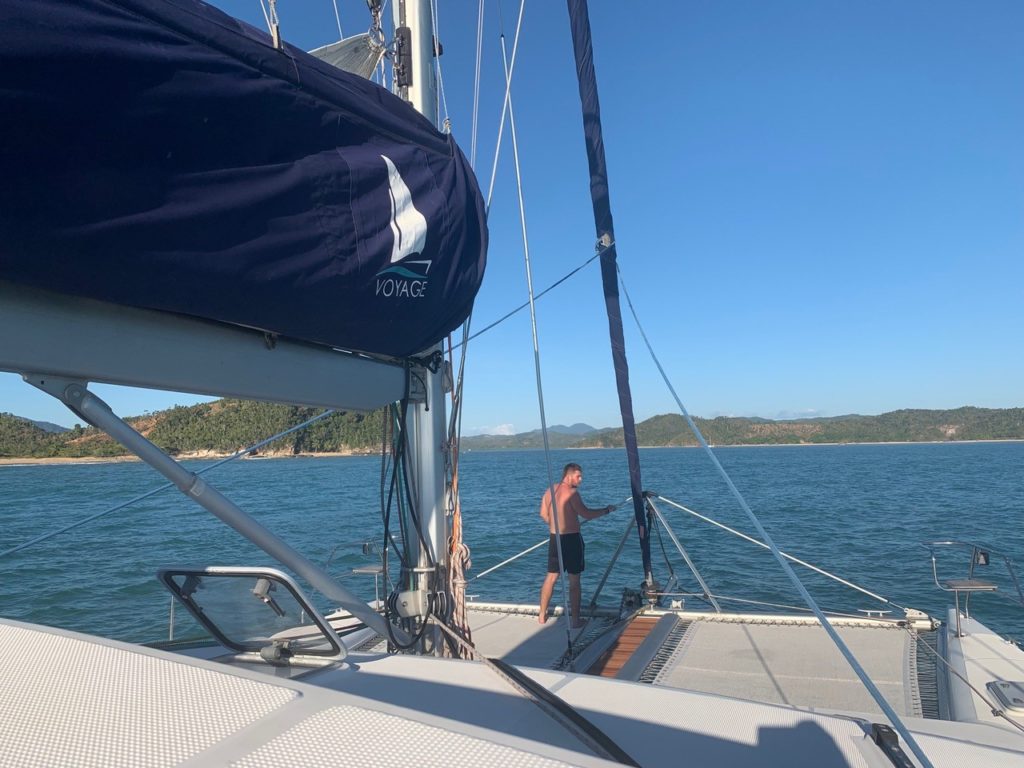 After an uneventful night where we poured over the charts and discussed weather and jump off points we awoke to another sublime morning on anchor. Abundant Life was just disappearing beyond the headlands as we upped anchor and followed in her wake.

We sailed from Russian Bay to Nosy Iranja where we had a quick stop for the boys to check out the elongated sand spit that joined the two islands together. After a quick dive on the coral and a hearty lunch we upped anchor and headed for Baramahamay river – Honey river. This is a navigable river for a few miles upstream with a village near the entrance which is famous for collecting and selling the most beautiful and fragrant wild honey.

The entrance is a little tricky but with our shallow draft and arriving with a few hours of sunlight in our favour we slowly edged our way across the bar and sandbanks and into the deeper water of the river. Abundant Life was there already, floating at anchor in a perfect position just alongside the village and well protected from any winds. We anchored about 50 metres adjacent to her in 3 metres of water and immediately invited them over for supper. 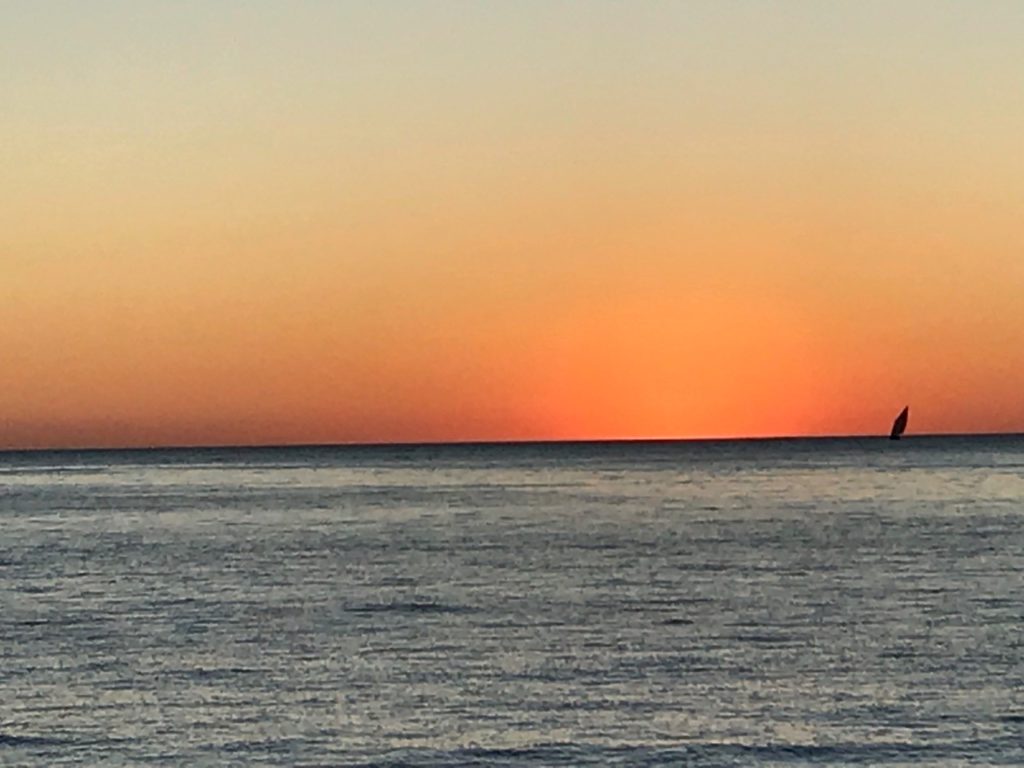 As we sat on Amarula’s cockpit we watched a perfect sun drop into the open ocean framed squarely by Honey River’s imposing headlands. We still had a few stressful days sail down the coast before we could look at jumping off west, but for now we were in a good space. Nothing beats a safe anchorage, sailing friendships, buddy boats and a happy crew. As we sunk further into our seats, eyelids heavy from a day of sailing and sun, my thoughts returned to Adéle and Rosie. I was glad that they were not present for the crossing. Bob and Chris had the strength, energy and experience to help share the responsibility of getting Amarula home with me. 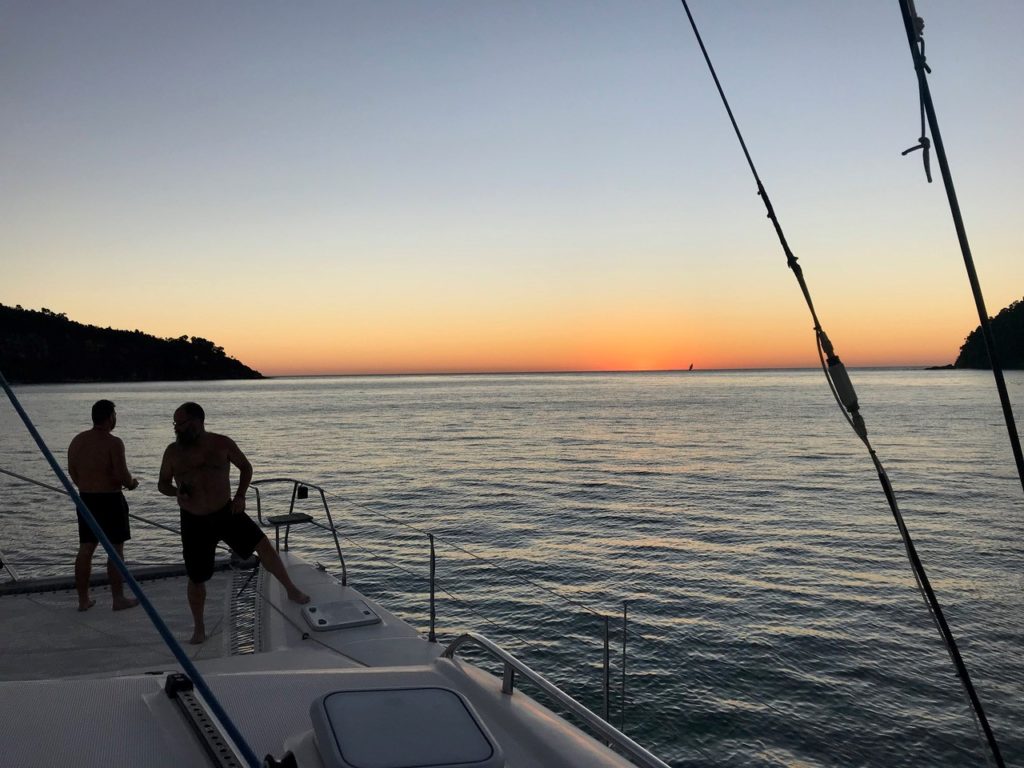 Chris and Bob watching the day end at Honey river

I looked out beyond Amarula’s targa bar as the sun dipped onto the horizon, immediately bleeding orange into the ocean and for all the world presenting an event that was pure bliss for the soul. Honey river was a far cry from the river of tears at the airport.

Competent Crew Course Certificates Within a short space of time, since we resumed our activities…