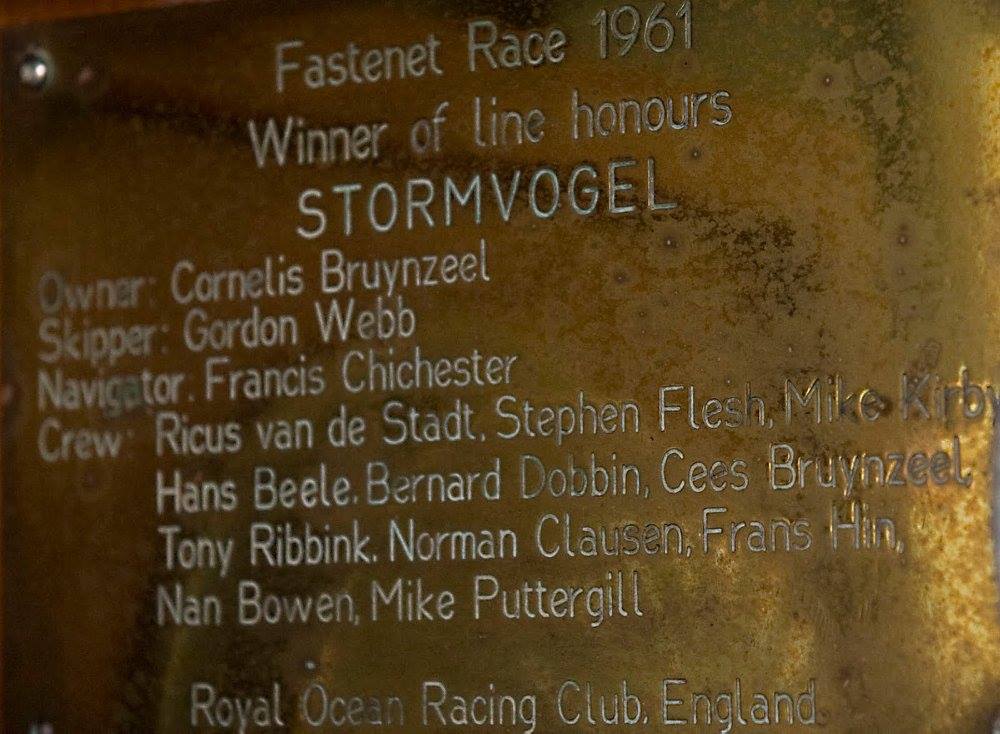 As mentioned before, I try very hard not to write about people I am in awe of.  And Cornelius (Kees) Bruynzeel, happens to be right at the top of my list. Hence as mentioned before, Zeeslang and her history lay on my desk for a very long time before I felt mildly capable of doing her and her creator justice. Eventually I took the plunge and the story of Zeeslang and where she finds herself today saw the light. 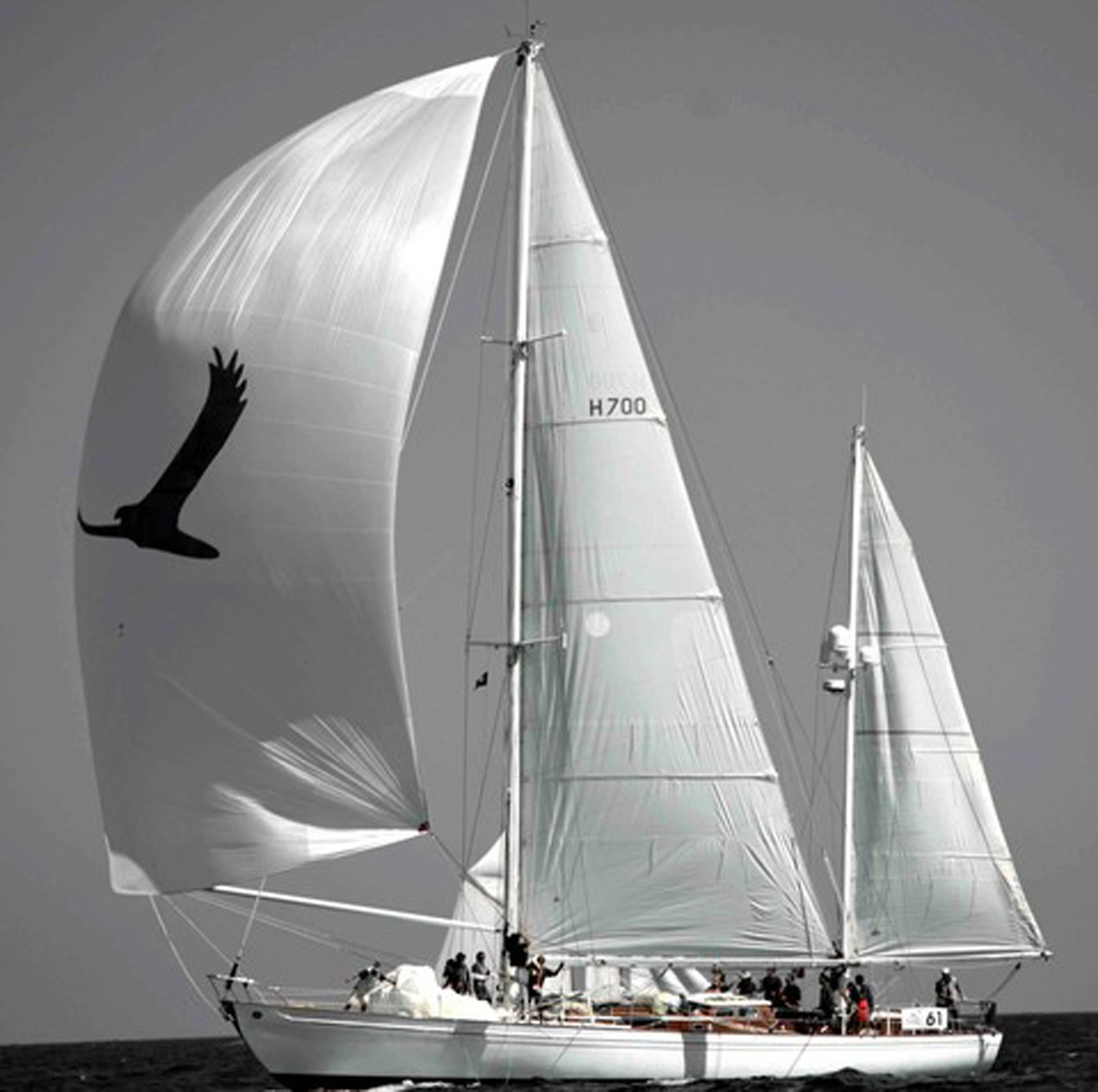 What I neglected to mention was that Bruynzeel’s crowning glory, Stormvogel, was also on my desk. I had seen photos of her sailing, her Bermudan rig billowing in the wind. I had read about her extraordinary domination of the sailing world in the sixties. I had marvelled at how the convictions of one incredible man led to the rise of what we currently know as the Maxi’s. I had even heard rumours that Stormvogel is being restored somewhere in South Africa. And yet I could not put fingers to keyboard.

There was just so much information out there, spread over countries and archives. How long do I search for, what do I include or leave out? How do I do the glorious racing machine that was Stormvogel justice? In the end I decided to simply tell her story. It may not be complete and I may be leaving out bits, but I hope to give you a little insight into the boat  that changed sailing forever, the boat named Stormvogel.

The facts surrounding Stormvogel are actually quite straight forward.  Stormvogel has a round bilge hull with a built down fin keel and separate skeg balanced rudder. Her construction is of a light weight, wooden, cold moulded glued shell of four laminates (marine ply), built over bulkheads, frames, ribs and stringers. The hull planking is African Khaya Mahogany. She is 74’ and has a Bermudan Ketch rig with a total sail area of 2,589 sq ft. Her main mast is aluminium and the tallest in existence when she was built.  And yet how she came to be firstly designed and secondly built is an incredible tale in itself.

Bruynzeel grew up in the Netherlands and joined the family’s timber processing factory. In 1939, using a new water resistant synthetic resin glue, he developed a durable three-ply panel that became known as marine grade plywood.   It was this product that, amongst others, was being produced in his Bruply factory in Stellenbosch, after Bruynzeel emigrated to South Africa.

The first boat that Van de Stadt designed and built for Bruynzeel with this new plywood was Zeevalk, a 35’ sloop. The next boat was Zeeslang, a fast, “weekend cruiser” to sail around Cape Town. Zeeslang, with her marine ply and lightweight construction, proved to be extremely speedy and Bruynzeel was convinced that light displacement was the way forward.

In 1959 he decided to apply this principle to the biggest possible yacht that was allowed to enter races, a boat with a 70 foot rating, and a length of approximately 23 meters, better known today as a Maxi. The yacht had to be as fast as possible, but it also had to be safe and easy to handle in all conditions. Bruynzeel, who had recently turned sixty, asked Van de Stadt to design such a boat for him. 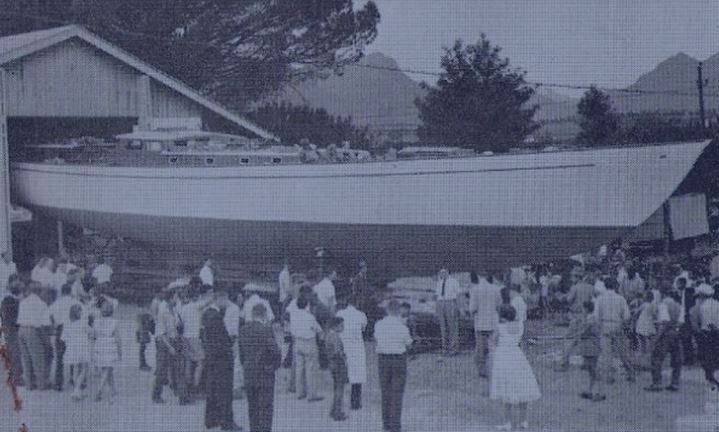 However, the Van de Stadt Zaandam drawing office was very busy towards the end of 1959 so Bruynzeel subsequently turned to another designer, Olin Stephens.  Stephens however, considered the project too risky and potentially damaging to his reputation as a designer. Hence Bruynzeel turned to the English designer Laurent Giles, who had experience with building large, lightweight stringer construction wooden hulls, and asked him to come up with a design. 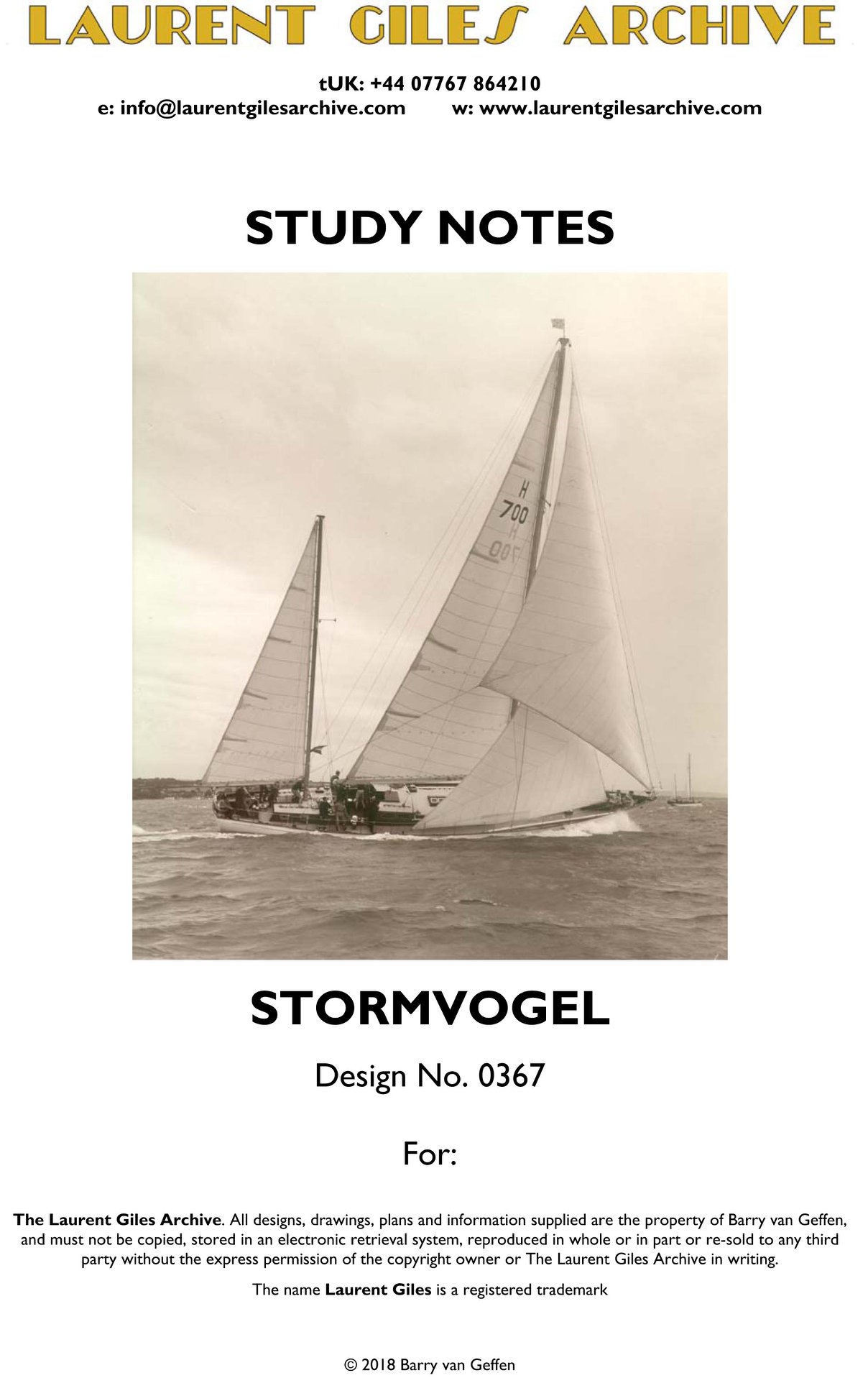 While Giles was still working on a preliminary design, Bruynzeel by chance met Capt. John Illingworth, known for racing and designing fast yachts, and asked him to also have a go at designing such a boat. With three different preliminary designs in hand Bruynzeel then turned to the University of Southampton, where he tested his three models in their towing tank.

The tests showed the Van de Stadt round bilge design had the best characteristics by far. The Van de Stadt Zaandam office, however, was still too busy to develop the plan in great detail. Thus came about an incredible collaboration. Bruynzeel decided that Van de Stadt would design the hull, the keel and the rudder, Illingworth would work out the rig plan, and Giles would take care of the construction plans, the interior and the overall co-ordination. Three designers, one vision and one boat.

The project hit another stumbling block when no suitable shipyard could be found to build such a boat. Bruynzeel by now had emigrated to South Africa and started a company, Bruply, to produce his hechthout, now known as marine ply, in Stellenbosch. Thus he decided to simply build the yacht in his own factory.  Not only was it cost effective, but Bruynzeel could now supervise the building of the yacht himself.

After sea trials off Cape Town, Stormvogel sailed for England on the 3rd May 1961 with Gordon Webb at her helm. She called at Saint Helena, Ascension and the Azores, before arriving at Dartmouth on the 22nd June. In spite of predominately light winds, the 7,660 mile voyage was completed averaging a speed of 7.6 knots.  Her high basic speed was proven time and time again, particularly by her records in the Fastnet races. In fact in that very same year as her launch, Stormvogel took line honours in the Fastnet Race.

Over a period of more than ten years Bruynzeel competed in virtually all the major races. In the late ‘50s and the ‘60s, very few big ocean races were sailed without Stormvogel and her arch nemesis Ondine, one of the famous American ‘maximum raters’, taking part.  The duals between Bruynzeel and Ondine’s skipper Sumner (Huey) Long are legendary.

Stormvogel however did not just race. Bruynzeel was adamant that her interior should be comfortable enough to go cruising and therefore it comes as no surprise that in 1967 he sailed Stormvogel around Cape Horn. In an excerpt from SA Yachting Magazine, Bruynzeel recounts the rounding.

“December 31. The last day of 1967 and a memorable one. The favorable breeze holds on and in the early hours we see the typical shape of Cape Horn. We are well ahead of schedule, the weather is reasonable, so we decide not only to round Cape Horn but also to climb it. We have Stormvogel ‘hove-to’, two crew members stay onboard and the others in rubber dinghy with outboard try to land. Our only difficulty is the abundance of seaweed that foul the propeller. Ashore, likewise, we have to cope with the abundance of nature, a kind of reed that grows man-high.

“We cut a path through it till we reach a sandy area where the girls and I make ourselves comfortable, while the ambitious ones climb to the top of Cape Horn to plant a Dutch flag.

Back onboard we find a splendid following breeze and we celebrate with a Dutch gin. After the second gin I come with the proposition – this having been too easy, to go around Staten Island and round the Cape the difficult way: from east to west, after which we could sail through Straits of Magellan to Buenos Aires.

January 2. We have made it! During the night a real westerly Cape Horn gale developed. With the stay-sail and reefed main and the wind at the strength of 40-50 knots, Stormvogel made good headway, but the going was rough. Bumping and bouncing, she forced her way through the seas; spray flying all the time.  At noon Cape Horn looms between two squalls. Again we make port tack and get some shelter from the high island, but we have to round the Cape and once again get the full force of the gale and the seas. Once round we can slack sheets on a northerly course to Beagle Channel.” 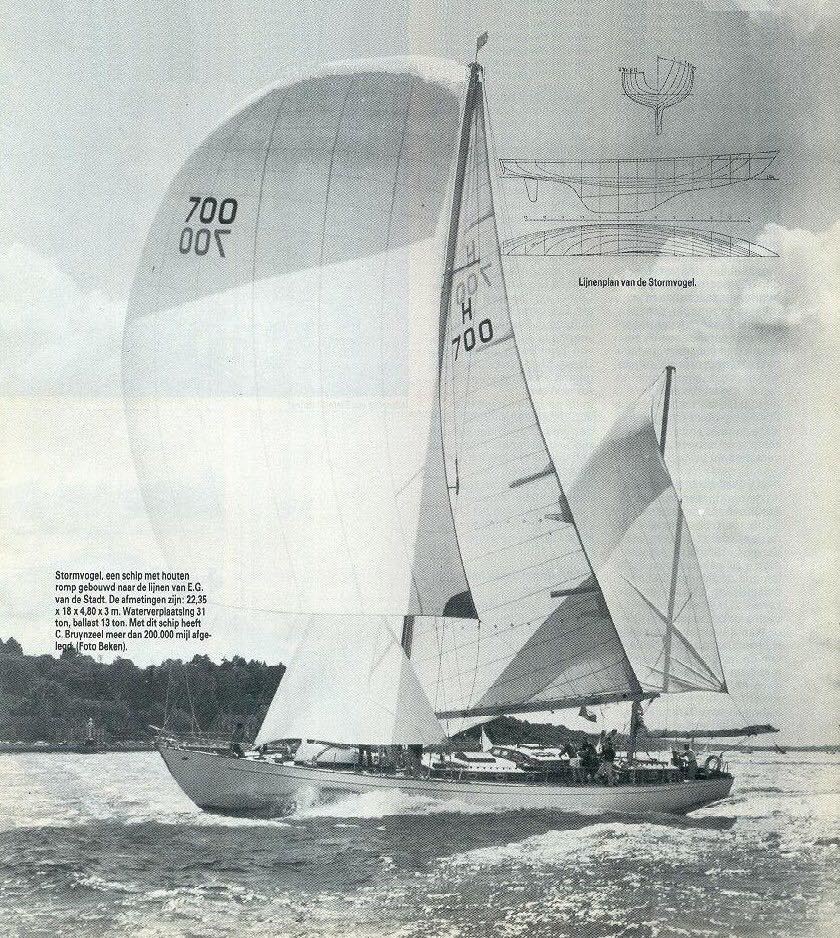 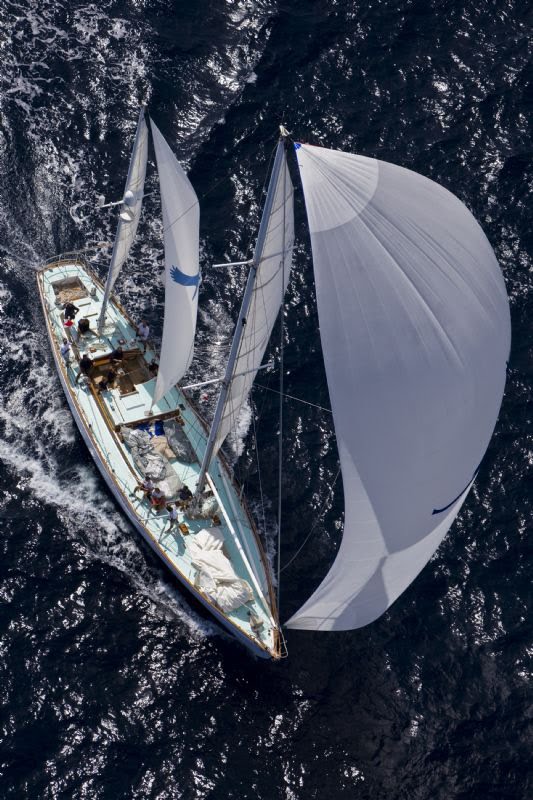 Despite Bruynzeel’s death in 1980, Stormvogel continued to race in the Classic events.  In 2008, forty years after taking line honours in the inaugural Middle Sea Race, she returned, finishing third in her class. That same year she also won the Classic Division of the Panerai Classic Yacht Regattas, skippered by Graeme Henry.  Sixty years ago Stormvogel had just departed on her maiden voyage to England, where she would take line honours in the Fastnet race. This year, in celebration, she will once again be on the start line of that iconic race on the 8th of August, with Henry at her helm.

Stormvogel turned out to be everything Bruynzeel wanted her to be. Fast, comfortable and competitive. One man’s vision to build an experimental light weight maxi, years ahead of its time, produced the legendary Stormvogel. And Stormvogel changed sailing forever.

Ahoy CROCS Sailors! When a sponsor is as loyal as Crocs have been to us…

Youth Sailing is alive and thriving at RCYC