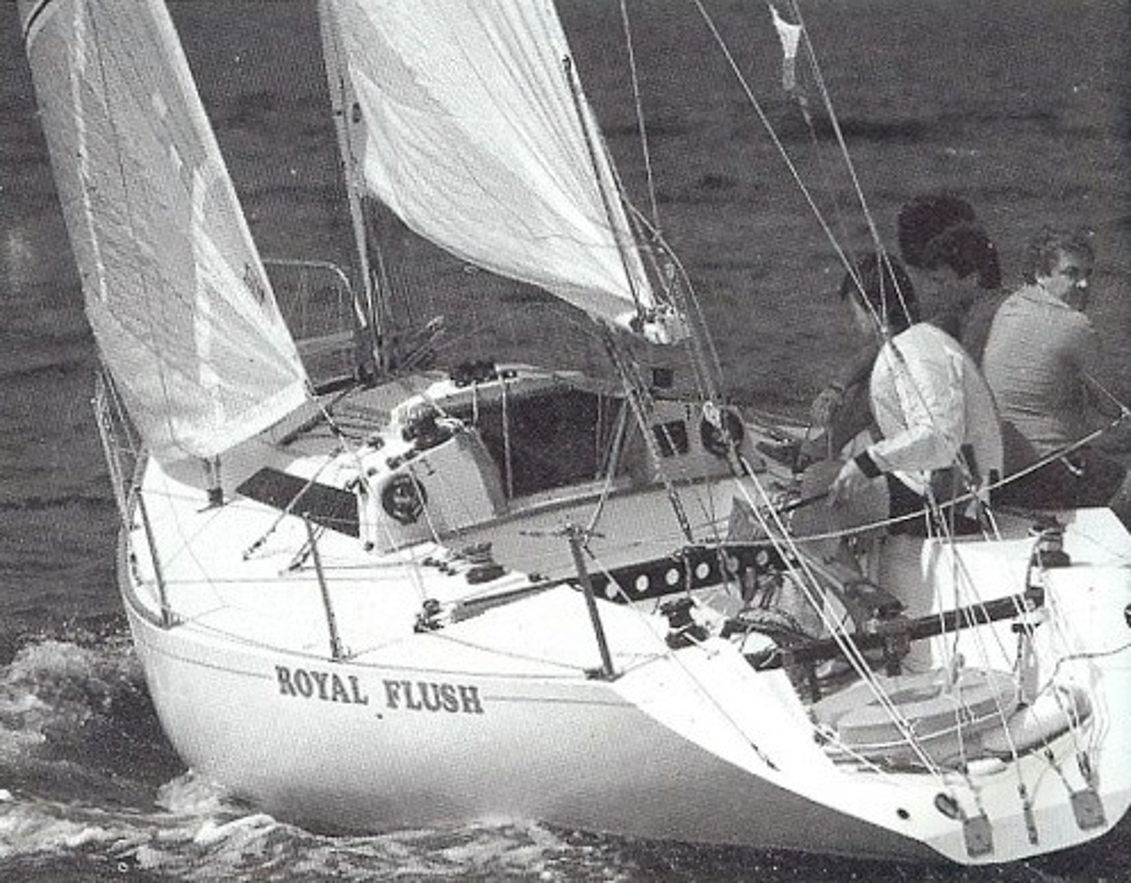 Blast from the Past – Royal Flush, by Liesl King

I usually find ideas for stories in old scrapbooks, faded photos or a barely legible article catching my attention. This time the boat found me. Researching sailing history is akin to going down a rabbit hole, and just like Alice you end up in the weirdest places. Yet every time I was researching something on another boat, or hunting for lost race results, up popped a boat named Royal Flush!  Hence, when photos of her restoration in Gordon’s Bay appeared on a Dutch ¼ ton site, I figured I had better pay attention and write about her!  Of course she had an extraordinary history, starting with the most iconic of South African races, the Lipton Challenge Cup. 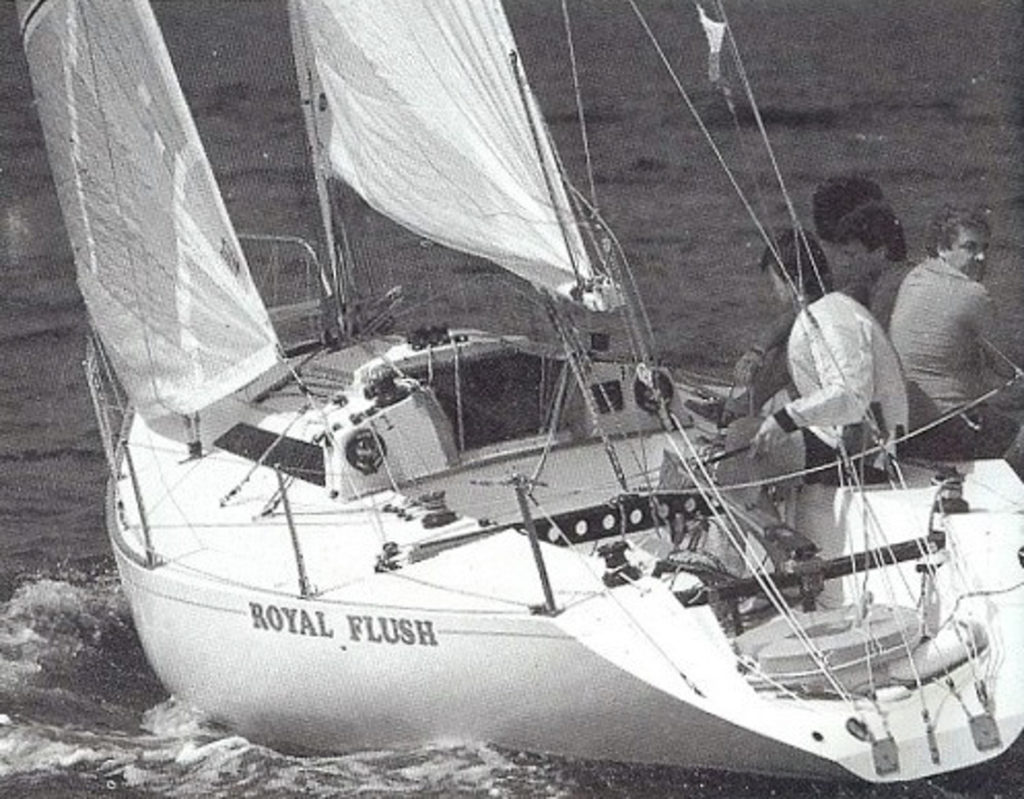 After an absence of eight years, the 1982 Lipton Challenge Cup race was going to be a fiercely contested event between the Durban and Cape Town yacht clubs. The Durban Club, determined to win the Cup, had commissioned a boat to be built specifically for the Lipton Cup and to this end a syndicate of Royal Cape Yacht Club members decided to ask naval architect Angelo Lavranos to design a boat to defend their title, won in 1973.  That boat was Royal Flush.

Since the quarter ton rating limit had moved from 18’ to 18.5’ IOR, the older boats like the Sweet Peas found themselves a little short of length. Thus the design for Royal Flush was 40% heavier than a Sweet Pea and almost 2 ft longer. In designing Royal Flush, Lavranos took all the performance and rating elements to their limits. She was constructed of a Kevlar sandwich laminate making her a full 400 pounds lighter than a full GRP construction, thus achieving a 36% weight saving.

Sadly it was not to be, and Point Yacht Club won the 1982 Lipton Challenge Cup with their purpose built quarter tonner Fuel Free, with Royal Flush, skippered by Rick Nankin, finishing second.  In the 1983 Lipton Cup however, Royal Flush, with Geoff Meek at the helm finally did what she was designed to do, winning the Cup and returning the trophy to RCYC.

Fast forward to March 1985, when advocate Joe van der Westhuizen bought Royal Flush with the specific aim of winning the 1985 Quarter ton World Championship. He was undaunted by the fact that a South African boat and team had never won a keelboat World Championship before. Even her skipper Geoff Meek, who had competed in many World Championships, had yet to win one. Royal Flush was refitted and Lavranos did some redesign work leading to the fitting of a new rudder and a bowsprit, which enabled Royal Flush to up her sail area substantially.  Then Royal Flush was shipped from Cape Town to Cherbourg. From there she travelled on a lowbed to Marseille, the final leg of her journey being on a ferry to Corsica.

On arrival in Ajaccio, Corsica, the conditions were found to be very similar to False Bay, choppy with about 15 to 18 knots of breeze.  The competition, held in the bay of Ajaccio, comprised two Olympic courses, a medium distance race in excess of 80 miles, a 20 mile inshore race and a 120 mile long distance race. Rule changes that came into effect after Royal Flush was built, meant that their 21 international competitors had a distinct advantage. As Meek put it: “They made our boat look like an Optimist in a fleet of Flying Dutchmen.”

While Royal Flush was already four years old, these rule changes gave Phillipe Briand, designer of the newly built Australian boat, Comte de Flandré, the chance to design a faster boat. Thus Comte de Flandré was considered the fastest boat in the fleet and favourite to take the title.

Yet Royal Flush had a hidden advantage, an extremely capable crew in Cliff Barnett, Neil Gregory and Joe van der Westhuizen, and a superbly skilled skipper in Geoff Meek, who had come to win. “I left here thinking it’s time I won a worlds, but you just never know.  In my brain though I was determined to win.  We had all kinds of conditions, all sorts of weather. We were quite often racing in light airs. We just had a really good regatta tactically and navigation wise. Therefore we often got better results in the offshore races than our boat suggested we should.”  In Corsica, the press reported that Royal Flush was slow and outdated, but as Meek explains, dead downwind she was the fastest yacht and also in light air spinnaker reaches, thus suiting the light conditions perfectly. Royal Flush may not have won a single race during the Championship, but she placed well consistently, finishing 4th, 3rd, 4th, 4th and finally 2nd. 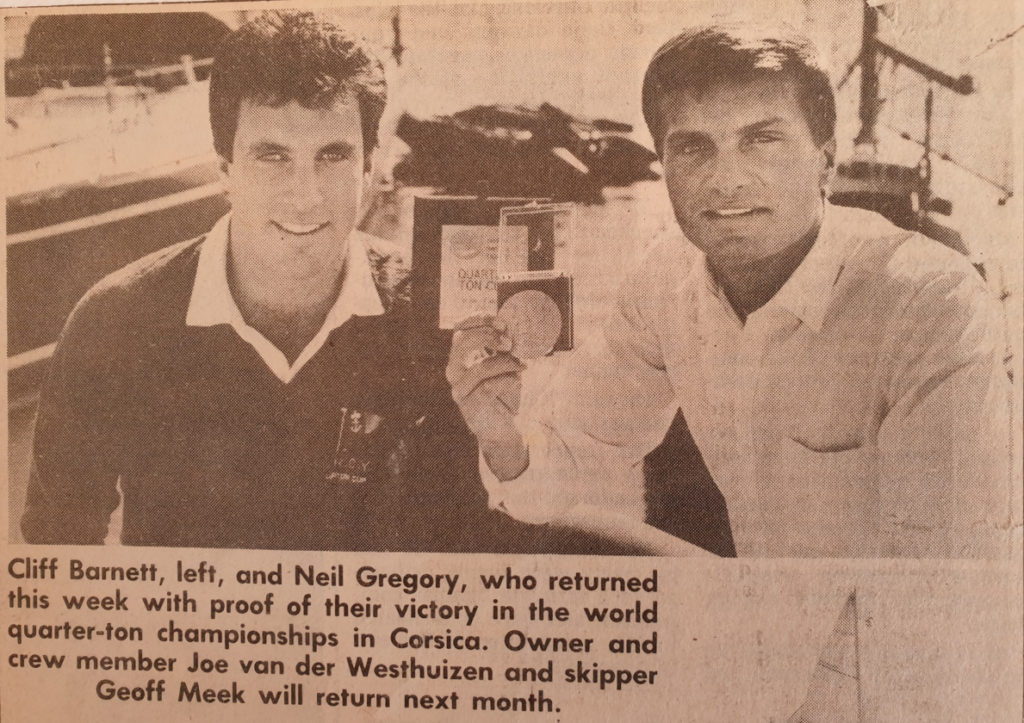 Barnett and Gregory with medals

Joe Van der Westhuizen described how the long distance race on the final day of the Championship panned out. “We completed the long distance race in just over 23 hours with Mnefi finishing about three minutes ahead of us. The rest of the fleet were indistinguishable specks on the horizon.  We firmly believed that Comte de Flandré was in the lead of that pack and thus we would be runner-up. Back at the hotel I was having a bath when Cliff came rushing in. “We’ve won. We’ve won the bloody Cup.”  He then told me the astonishing news that Comte de Flandré had broken her mast and Nenufarr had managed only sixth, leaving the championship to us. When he left, I sat still for a very long time and thought about the very first day we had Royal Flush on the hard at RCYC, when I told everyone who cared to listen, that we were going to win. Well we did win, and it was not just luck, that gave us the championship.  Geoff skippered like the true world class skipper he is.  The crew work of Cliff and Neil was magnificent, and my own “weighty” contribution served us well.”

It was the first time that South Africa had won a keelboat World Championship.

Meek acknowledges that it was a gargantuan team effort especially behind the scenes.  Joe van der Westhuizen, RCYC members and the Cruising Association of South Africa all contributed to the expenses. Even Lavranos contributed and he also did the redesign work needed to update the boat.  Hood produced the sails; Bellamy Masts restructured the rig; Manex Marine provided Marlow rope; Central Boating World the fittings, John Robertson Yachts built the new, ultra-light rudder designed by Lavranos; Sirius Marine built the bowsprit; SA Metal and Waste Control provided transportation; Safmarine shipped the yacht at nominal charge and NCS Plastics provided resins and expertise. They say it takes a village to raise a child, but it clearly takes an entire sailing community coming together, to send a boat to a World Championship!

The final word coming from the Australian owner-skipper of Comte de Flandré acknowledging that “Royal Flush was probably the best-sailed boat over the Olympic courses.” 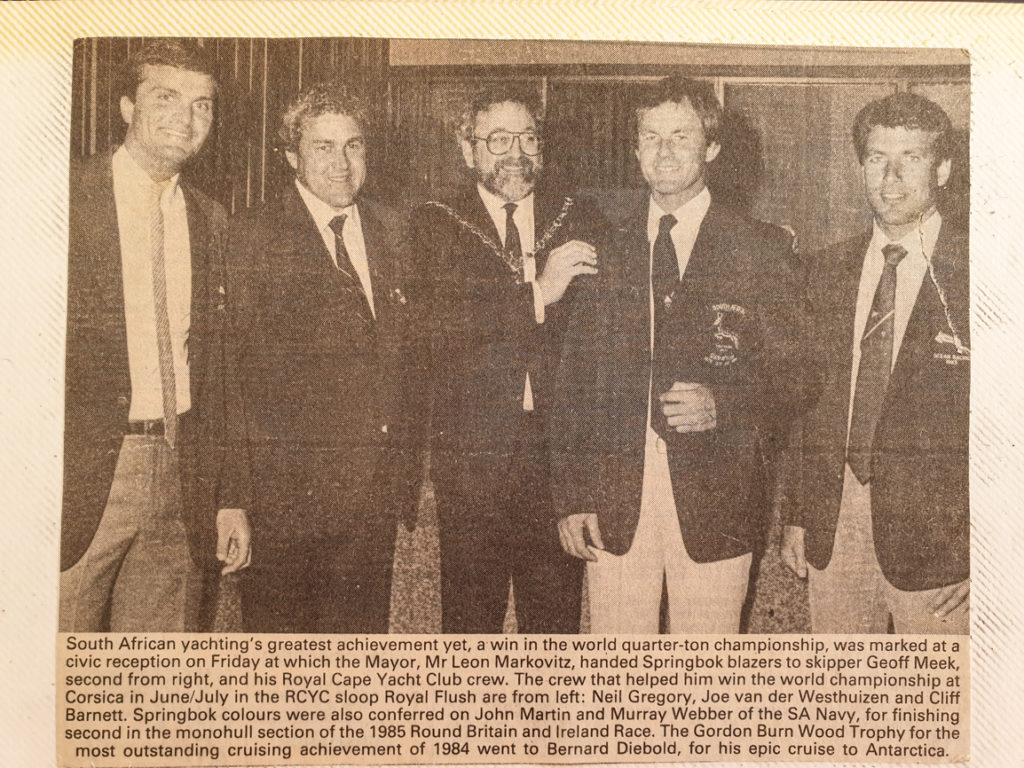 Meek and his crew returned to a hero’s welcome, receiving their Springbok colours in honour of their achievement.  Royal Flush was shipped back to Cape Town where she remained at RCYC for a number of years, with various sailors competing on her. Then she vanished off the radar. That is until a young shipwright from Gordons Bay, Marius Jan Swart, came across an ad on Gumtree in 2015. It read: “This boat is a quarter tonner built in 1984 she is an Angelo Lavranos. Her Overall length is 7.82m, with a beam of 2.9m. She needs a new deck, rudder and deck hardware. The mast and boom are ok, but need some work. The boat was very advanced for her time, winning the quarter ton worlds in Italy 1984. Hull is solid. Out of the water at the Cape Town Waterfront.”

Swart had been fixing up his own boats for years, working between Newport, Rhode Island and the Caribbean.  With sailing clearly in his blood, he joined a race team, crewing on a Dixon 015 called Danneskjold as well as one of the few remaining NY 40’s Marilee. In between races he was looking for a project, when the gumtree ad popped up.  “I had a look and decided that she needs to sail again. I knew it was not going to be easy as the entire deck and cabin house had smelly, nasty rotten balsa wood throughout. The boat had no name though, and it was only after some research that I realized that some of the information on the ad was wrong and it was none other than Royal Flush.

“The plan was to get her back in running for the world cup and hence I put all my effort into making her a racing machine.” He cut everything off, except the frame and hull and started afresh with more modern composites. “She is now stiffer and lighter than before. I also built a brand new carbon fibre bowsprit, carbon fibre rudder and tiller”, he explains.  “Her deck is also carbon reinforced.  Everything was going well and Royal Flush was relaunched on November the 5th 2019.  Then life happened.  The owner of the boats I was racing on was diagnosed with cancer and all racing stopped.  With it, went my dream of getting her to the world cup on my own account.  So, sadly she is back on the market. It is a shame that she will not be flying a South African flag at the World Cup, but at least she will once again be competing.”

Last Friday night’s lucky winner was Mr Deane White, who was unfortunately not present to…

Last Friday night’s lucky winner was Ms Lucy McDonald, who was unfortunately not present to…