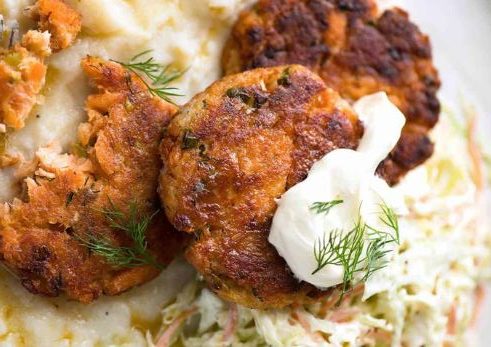 Who would have guessed that the origin of fishcakes hail back to 19th century England when the leftover fish was mixed with potato, dipped in batter, fried and served as snack.  ifood.tv reports that traditionally these cakes were made of cod, but today in Europe and Eastern Asia, salmon, jumbo lump, crab meat and angel fish are also used to prepare them. Chef Chad adds his own special twist with green chilli, coriander and a touch of mint.

Add water to a medium pan and place the fish in and cook on medium heat for 5 minutes. Turn off heat, and allow fish to cook in the hot pan. Boil potato with the skin and set aside.

Drain the water off the fish and flake the flesh. In a large bowl grate the potato and add to the fish.

Combine the green chilli, coriander, mint, onion and egg yolk with the fish and the potato. Season with salt and mix well.

In a separate bowl beat the egg with the ¼ cup water. Place panko bread crumbs in another bowl.

Divide the fish mixture into 12-14 round balls, depending on what size you want them and flatten them in the palm of your hand.

Dip the fish cake into the egg and then roll into the bread crumbs. Heat some olive oil in a pan and fry fishcakes until golden and crunchy. Drizzle with lemon juice and serve. Repeat with remaining balls.

See image below for the Start Area. Please note no spectator, media or VIP boats…

Last Friday night’s lucky winner was Mr Andrew Brander, who was unfortunately not present to…