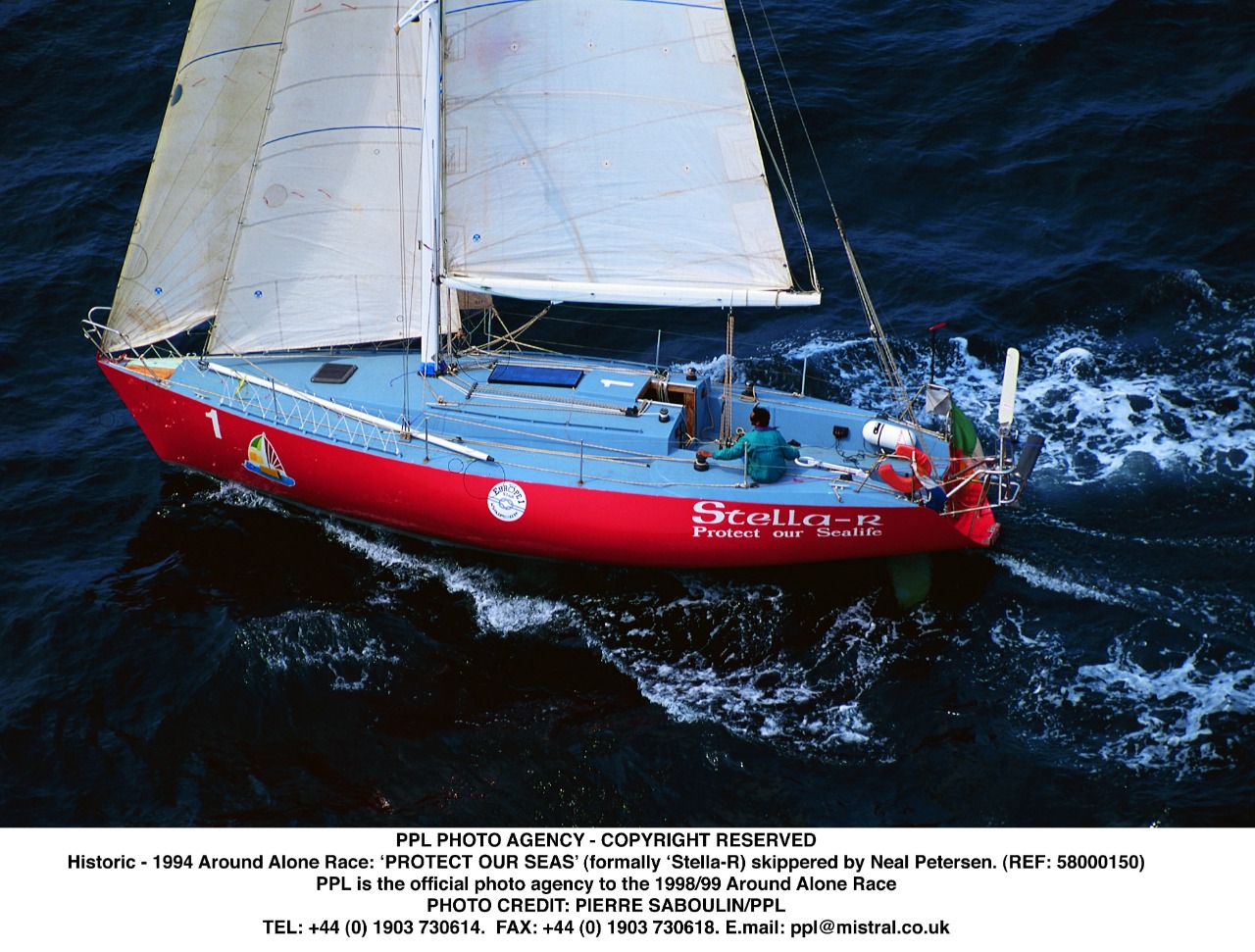 “What” and “if”.  Two innocuous little words when on their own but put them together and they conjure up a world of endless possibilities, a world of adventure, a world of daring, a world of “what if?”.  Sailor, diamond diver, boat builder (albeit badly), crosser of oceans, adventurer, author, motivational speaker – Neal Petersen has lived an extraordinary life ruled by those two little words.  What if?

Born without a left hip socket, Petersen couldn’t run and play like other kids, instead he read books.  “I could disappear into somebody else’s life.  The books that captured me most were the ones about sailing.  I remember reading Sir Francis Chichester’s Along The Clipper Way. When I finally got rid of the crutches, I built a tree house and sailed the sea with a rope ladder.”  Another book on his reading list was Joshua Slocum’s Sailing Alone Around the World. 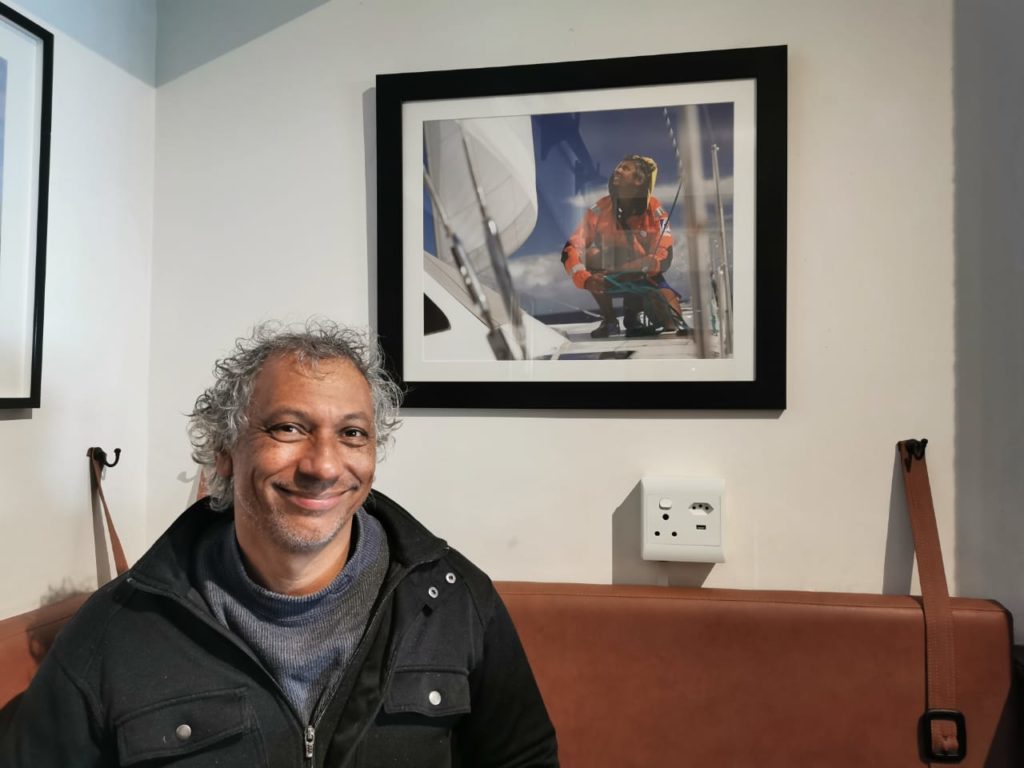 Thus it was no wonder that he started hanging around the Royal Cape Yacht Club, learning, absorbing and hitching rides on yachts whenever he could.  In 1982, the inaugural BOC Challenge singlehanded round the world race took place.  Unlike its predecessor, the Golden Globe race, which was a singlehanded nonstop round the world race, the BOC Challenge was to be sailed in stages and the first of three stops was Cape Town.

Petersen was ashore as English sailor Richard Broadhead, approached his berth in the RCYC marina.  The 14-year-old boy took the mooring line from Broadhead as he berthed and was invited on board.  “That very moment was when I decided that one day I was going to do the BOC,” Petersen says.  “I knew then I was going to sail around the world.”  Yet racing around the world does not come cheaply.  Petersen had no boat, no money and no sponsor.  Undaunted, he employed those two little words. What if?  What if I build my own boat?

Working on oil rigs, and as a diamond diver off the coast of Africa, he managed to save up money to start building his own boat.  Named the Stella R, after his mother, the 38 foot boat was built from castaway and donated parts and sorely lacked modern technology.  At the start of the 1992 OSTAR race (Observer Singlehanded Transatlantic Race) from Plymouth to Rhode Island, Stella R was labelled a “floating coffin”.  Two days later, high seas ripped a hole in her hull.  Undeterred, Petersen turned around, headed to Baltimore on the south coast of Ireland and 36 hours later with the help of friends, Stella R was back on the water and racing.  Of the 67 strong fleet, 12 did not finish.  Not only did “the floating coffin” make it to the finish, but she finished with ten boats behind her. 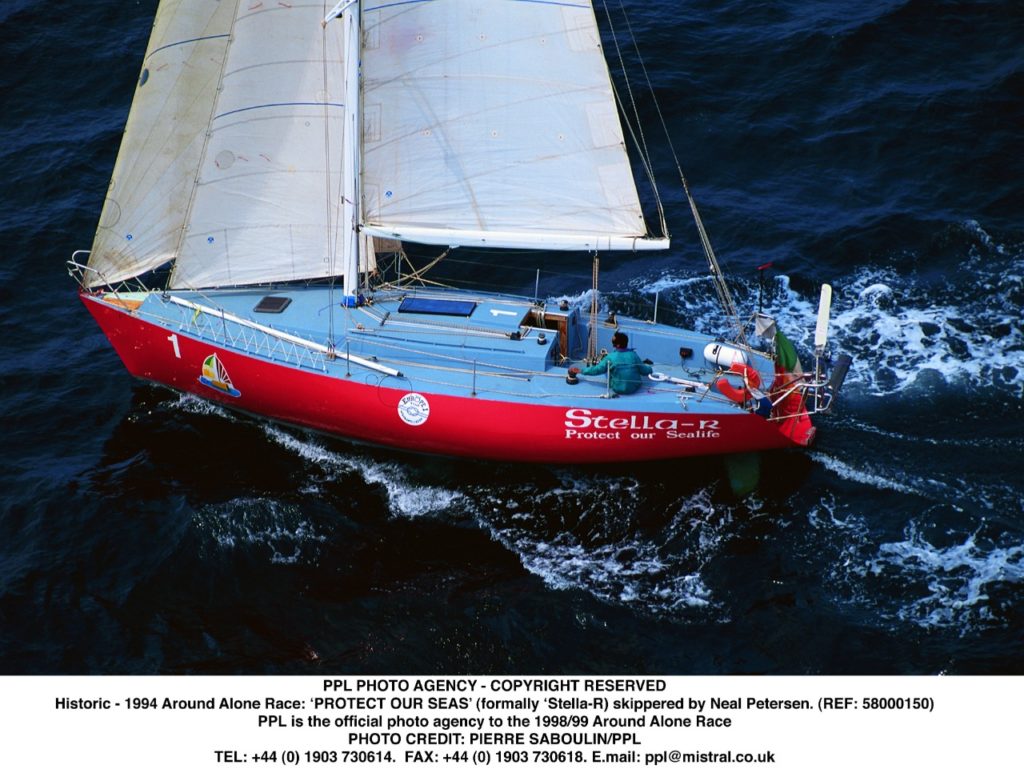 In 1994 Petersen and Stella R, renamed Protect Our Sealife, started the 27,000 mile BOC Challenge race in Charleston, South Carolina, sailing in Class II.  There was another South African entry in the race, RCYC member, JJ Provoyeur sailing in Class I aboard Novel South Africa.  Petersen completed the first leg, arriving in Cape Town after 67days 16hours 59minutes 47seconds.  Sadly he was forced to retired when Protect Our Sealife was demasted during the second leg to Sydney, forcing him to limp into Port Elizabeth.  What was left of the mast was removed and through the help of some folks, the boat was shipped back to Cape Town as deck cargo.

Back at RCYC he managed to fix the deck and the mast, but by the time it was done it was late February.  The fleet had already departed on the third leg from Sydney to Punta del Este and were nearing Cape Horn.  Petersen calculated how long it would take him to get  to Sydney and then Cape Horn, looked at the forecasted weather conditions along the route and made a hard choice.  “The conditions between Cape Town and Sydney and then Cape Horn were going to be horrendous most of the time.  It was going to be dangerous and I didn’t want to risk it.  By the time I got there, there would be nobody down in the Southern Ocean who could come and help if I got myself into trouble.  At the same time Isabelle Autissier had already gotten into trouble there and had to be rescued after her boat sank.  Hence I decided it wasn’t good seamanship to continue into the Southern Ocean.”

Not one to give up easily though, Petersen did another “what if”.  He officially retired and then set sail on the now repaired Stella R, heading for Punta del Este, to join the fleet unofficially for the last leg.  “I sailed the last leg, to keep building my experience.  And once I got to Charleston, I immediately started getting the boat ready for the next BOC Challenge in 1989/99, putting all my energy into finishing what I started”, he explains. 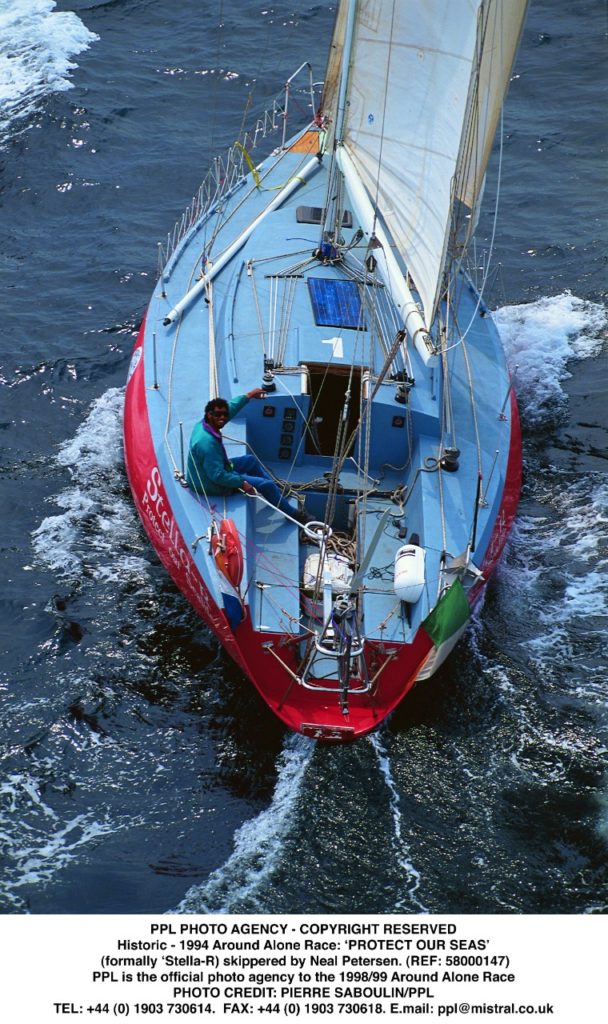 He settled near Charleston, South Carolina.  The next BOC Challenge was four years off and Petersen, gregarious by nature, spent his time, when not working on the boat, talking to thousands of kids on how cleaning up their environment protects the sea life, as well as regaling them with stories of his life on the ocean.  Teaching them the concept of “what if”; that with hard work, determination and passion, you can reach your dream.

Come 1998, Petersen and Stella R, now renamed No Barriers, were finally ready to finish the dream that started in 1982 when a 14 year old boy, tied up an Englishman’s mooring line.  The race, now renamed Around Alone, started and finished in Charleston, with stopovers in Cape Town, Auckland and Punta del Este.  On the 27th of January 1999, Petersen arrived in Auckland having crossed the Southern Ocean in 52 days, 20 hours, 12 minutes and 27 seconds.  “It was difficult.  The seas were big and frightening.  It’s not a place for the faint-hearted. I’m just glad everything went smoothly.  It was a big psychological barrier to overcome, but I just took it one day at a time”, he told the press on arrival.

Almost 47 days later, on arrival in Punta del Este, on the 24th of March 1999, at around 9pm, he concluded his 4-year solo-circumnavigation.  The race itself however was not finished and No Barriers and Petersen departed for Charleston on the 10th of April.  On the 24th of May, 44 days later he crossed the finish in Charleston, coming fifth in Class II after 195 days at sea.  Thus becoming only the fourth South African, after Bertie Reed, John Martin and JJ Provoyeur, to finish the BOC Challenge race.

The inevitable question, once one has achieved your ultimate dream, is what is next?  Of course there is always another long distance ocean race, as sailing never quite leaves one’s blood.  Yet for Petersen, it was another “what if”, that led him in a completely different direction. Those days in Ireland and Charleston, working on Stella R and speaking to school kids, had planted a seed.  With his passion and ability to talk to anyone, Petersen became a highly sought after motivational speaker, with two books to his name. No Barriers was published in 1994 and Journey of a Hope Merchant, which won the 2005 National Outdoor Book Award, was published in 2004. 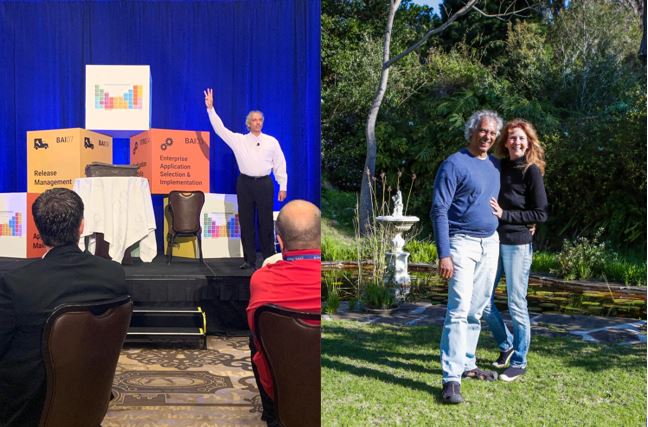 These days Petersen has a lovely wife, Darlene Kristi-Petersen, lives mainly in the Dominican Republic and owns a high performance catamaran named El Gecco.  “It fulfils my need for competitiveness, without me necessarily competing”, he explains.  He hasn’t parted with Stella R either.  The boat he built himself and sailed his entire solo racing career on, is still at his home in Charleston.  So has he given up racing completely now that he is a cat owner?  “Oh no” says Petersen and regales me with a tale of a recent doublehanded leg of the Bermuda One-Two race, from Bermuda to Newport, involving a hurricane, Gulf Stream gales, incredible boat speeds, a spinnaker ripped to shreds and a rolled over boat. But they still won, he assures me with a grin!

Clearly Petersen has not given up on adventures, he has merely swopped the gales and the big waves of the Southern Ocean for the hurricanes of the Caribbean.  Covid-19 may have temporarily derailed his career as a keynote speaker, but Petersen is anything but down. Why would he be? There is a world of endless possibilities out there, a world of infinite adventure and a world of “what ifs”, ready to be explored.