The report, by Lindani Mchunu.

One of the most surprising moments of my life has to be my time working here at the Royal Cape yacht Club. It surprises me that I’m here. I will try in this report to best describe why. I spent my 38th birthday in Johannesburg, my birthday coincided with an “Oceans Skills Summit” I attended on the week of the 24th and 25th of February 2021. The Summit was held at Marriot Hotel Melrose Arch. I booked into a one bedroom Airbnb in Illovo.

Most of you are not aware of this but I lived in Johannesburg for many years and my last residence in Johannesburg was in Illovo. The northern suburbs of Johannesburg were my playground, I knew them like the back of my hand, and I used to drop my sisters in school every morning right up until my youngest sister matriculated from Crawford in Sandton. Actually I dropped my youngest sister at school and picked her up from kindergarten right up to high school. This is why I know the northern suburbs of Johannesburg so well, same goes for Pretoria East.

I lived there for a while with my family and went to primary and high school there. I had to know almost every back route to avoid the traffic and the cops, when I used to drive without a license at 14 until I got one at 18. So you can imagine the nostalgia I get when I am back in both cities. Johannesburg in February of 2021 felt very different. No traffic and no cops.

Sandton was like a ghost town, Rosebank was like a small village, parking readily available and restaurants empty. Even though I am originally from Durban. Home to me is Joburg and Pretoria. These are the cities I know very well. These are the cities I identify with. As a result I was rather happy to be home, happy to be in a familiar space. Yet this visit would reveal something new, something I would realize on the last day of the Summit.

TETA, an organization that funds our academy, actually our biggest funder to date, together with the Department of Higher Education, invited me to be a guest at their inaugural Oceans Skills Summit.  All the stake holders involved in skills development and training within the maritime sector were present. Only 50 guests attended the event physically and everyone else attended virtually. I was one of the 50. It was quite amusing to me. Just an Academy Manager of a Yacht Club that most of the attendees have never even heard of.

What a journey it has been, trying to convince our government that sailing has a place in the development of future seafarers, that yacht clubs have a role to play in facilitating that process. Just a young black guy in a Royal Cape Yacht Club blazer, talking about boats and yacht clubs right there in Melrose Arch.  I kept thinking to myself the whole time, that life can be such a mystery when it chooses to be, hiding everything in plain sight, even a future that you will someday live out in the very same place that was your past. 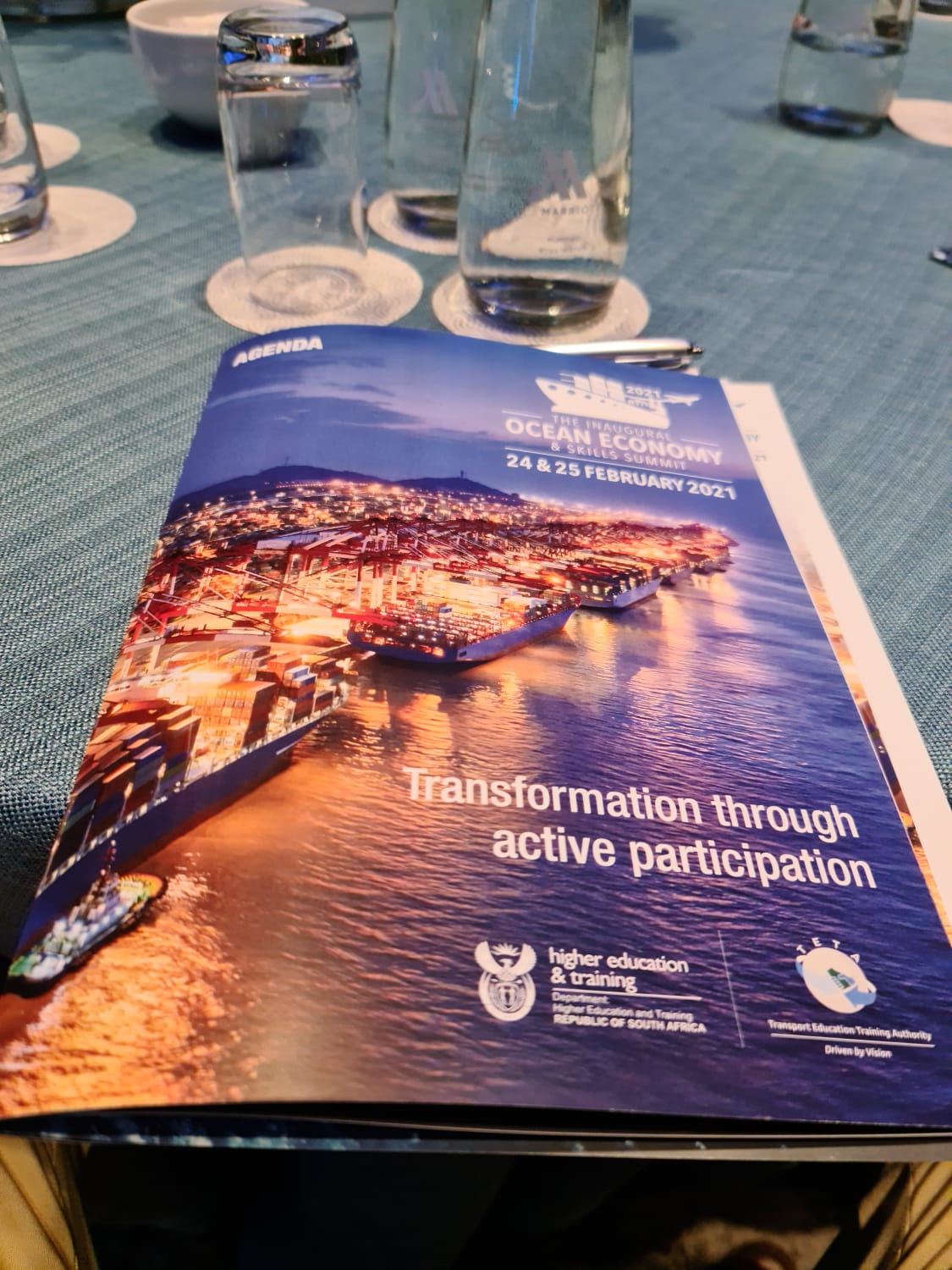 The attendees of the summit were all the people that merely three years ago, I wished I could bump into somewhere and introduce myself. Here I was with all of them in one room for two days. Not only would I get to introduce myself to them, but I would address them three times. The keynote speaker was the Minister of Higher Education and not only did he touch on the importance of the maritime sector, but made special mention of our Academy program and commended the work we are doing in familiarizing youth from marginalized communities with the ocean. The Navy was also present, in their immaculate white uniforms accompanied by the Air Force. The South African International Maritime Institute, represented by their CEO. Even Vanessa Davidson from Sabbex was present, who was the only white person in the room at some point. She and I joked about it a lot, saying our roles are reversed every time we attend government functions. Such is South Africa. People who are afraid to meet. People who barely trust each other, if at all. People who are in essence living in constant fear of one another, yet somehow through the cracks of those walls, Vanessa and I could crack a joke about our roles being reversed in Johannesburg and Cape Town.

Day one of the Summit, Vanessa put me on the spot and asked me to speak about our program and all the amazing work we had done in the past three years.  After that Mr. Dumisani Ntuli from the Department of Transport urged me to speak of our upcoming Cape2Rio 2023 Campaign. Then finally I would be asked by the CEO of SAIMI Odwa Mtati, to speak about our program and academy and what we can do to support the skills development of future seafarers.

I don’t sail as much as I would like, but not because the opportunity is not available to me. It’s got more to do with the feeling that I get when I’m out on the water. The feeling of privilege. Even if all I’m doing is hiking, once the frenzy of the start line is over and we are committed to our chosen course to the mark and everyone is focused on the boat sailing at its best, I immediately have this feeling of complete calm and peace.

This is the privilege I speak of. This is what compels me to get more people on the water, especially youth from marginalized communities. I can’t think of anyone that needs it more. Dealing with drugs, rape and death at every corner, being out at sea must feel like being released from death row the day before your sentence is carried out. It is a feeling only the soul can describe. It’s silent and heavy at first, then suddenly your whole body feels like a feather and once again there is hope. Our program is designed to not only teach kids how to sail, but to encourage them to pursue careers, further education and apprenticeships within our sector. We don’t want them to visit us once a week. We want them to stay and no longer be guests at our Club but permanent members who will sail forever.

On the second day of the Summit this is the message I tried to convey. I have a conviction that will not be rooted from my being. A conviction that was planted in me by the ocean itself. My people must have a relationship with the Ocean as a matter of urgency. I’m not sure why I feel this way, but this is how I feel. On the last day of the Summit the Chairman of TETA, the CEO and the Board came to me and said keep going, I told them, ”I never intended to stop”.

That is what I realized in Joburg.  I am no longer a city boy, and my roots are no longer planted under the concrete of the sprawling metropolis that is Johannesburg and Pretoria. I no longer belong to a people nor a city. My roots are in the depths of the Mariana Trench sprawled out across the seven seas. I realized that the past four years of my life have been the rest of my life. From here on out wherever I go the ocean is with me. To many of you this academy is just another sailing program, a CSI initiative the Club must do. To me it will always be a refuge from the storm, for those that have been cold, wet and hungry for far too long with no destination in sight.

This past year has been a difficult one for our Academy. We had to let go of 14 wonderful kids in August and we will probably let go of a few more in March this year, as our last project comes to an end. Funding is scarce, there is so much uncertainty everywhere. The country’s economy has sunk to new lows, unemployment rate is reaching record highs. Smarter people than me, tell me all the time, write off this year Lindani, this funding is not coming. Pretty soon I might come hat in hand to some of you, asking you to sponsor a kid or two for a couple of months.

I don’t know what the future holds for our academy. If I listen to all the educated talk, then I should believe we are going backwards for the first time. Unfortunately for me, I am too stubborn and not educated enough to know when to throw in the towel. I know what I saw in Johannesburg. I saw a young black man from an institution that carries the stigma of colonialism stand up and speak of triumph for black people. The work we have done in the past three years is known throughout this country.  That work is what will absolve us. That work is what will speak for us. Pretty soon I will share even bigger news with you and it will be prove once more just how much we have achieved.

The accolades are not money. The adulation will not make funding magically appear. Yet what I know for sure. Is that the work will not be denied its final destination and that my dear friends, is what I like to call “the inevitability of cause and effect”. We are not a phoenix that will rise from the ashes, we are water people. We dive to the depths of the ocean, and like a whale we come up for air and then you will see us in all our glory.

See you on the water.

NSRI have been fantastic with all their help and efforts with Cape 2 Rio 2014. Don't…

You are cordially invited to sample the wines from a wide selection of wine estates,…