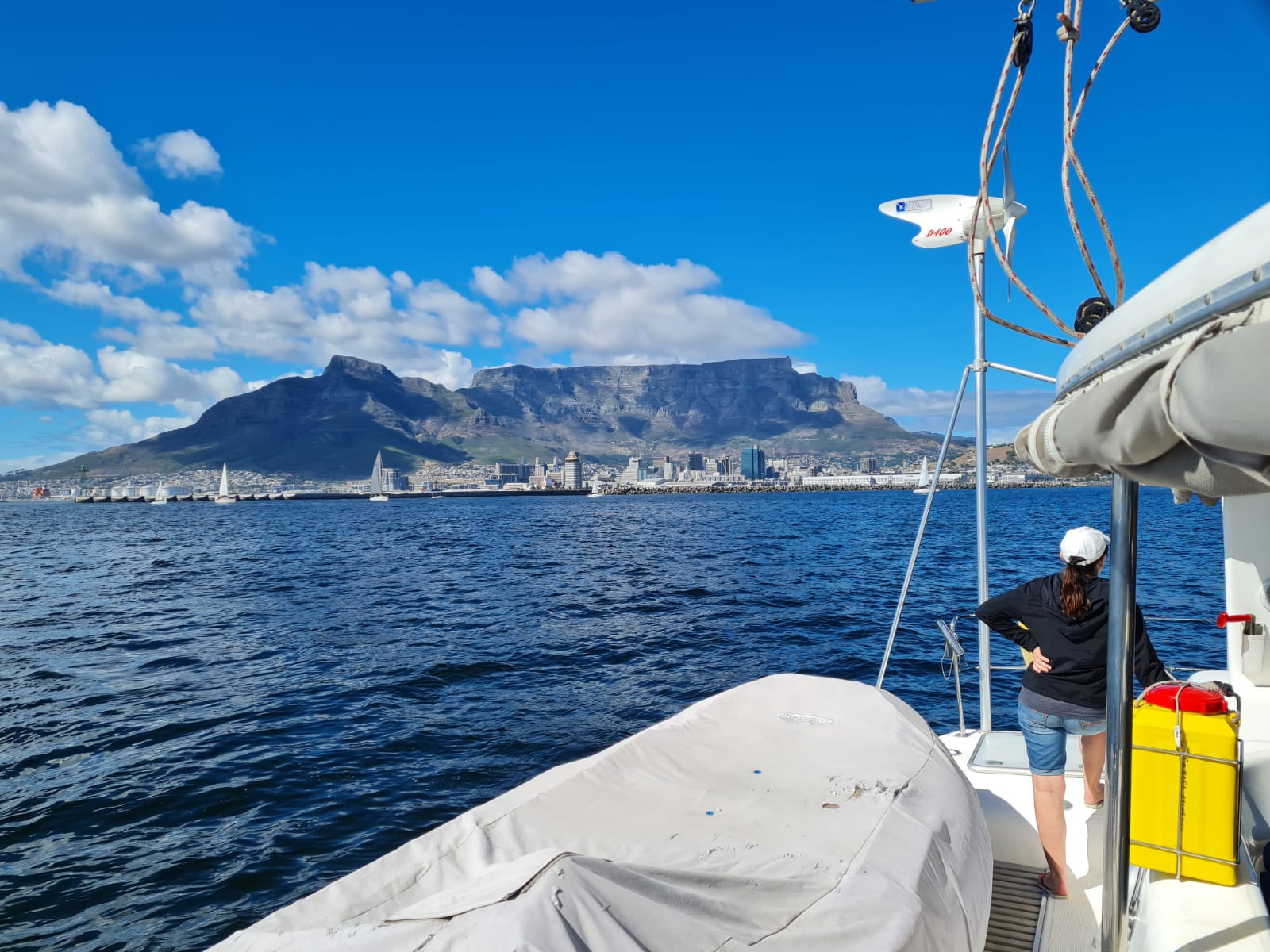 A middle distance race to nowhere, by Liesl King.

There seems to be a general misconception that sailing catamarans are only designed for blue water sailing. Hey, we have all seen the photos of cats in the Caribbean and the Med, moored in perfectly flat azure water, or majestically sailing around remote islands. So I guess I shouldn’t be surprised that people are still surprised by the fact that cats now form part of the Club’s racing fleet. And in case you have missed them, there are three of them currently racing in the Twilight series.  Amarula, Seabiscuit and Isla. 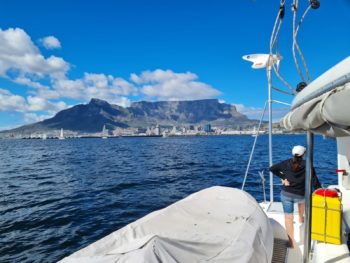 Having completed a few Twilight races, and very successfully I might add, I was delighted when skipper announced that we would be doing the middle distance race. While I have done many Twilight races, I have precisely one and one twentieth, longer or away races behind my name. One Round Robben Island race and 15 minutes of the Admiral’s Regatta in Hout Bay. So there we were on the appointed Saturday practising our tacks and gybes pre-start and generally keeping out of the way.

You see there is only one tiny problem with a sailing cat, sorry actually two. It is rather large and it cannot turn quickly – even when motoring!  Hence skipper has learnt that hanging out around the back of the fleet is very prudent, especially in a mass start. Those adrenalin fuelled big boats jockeying for position up and down the line are best kept well clear of. 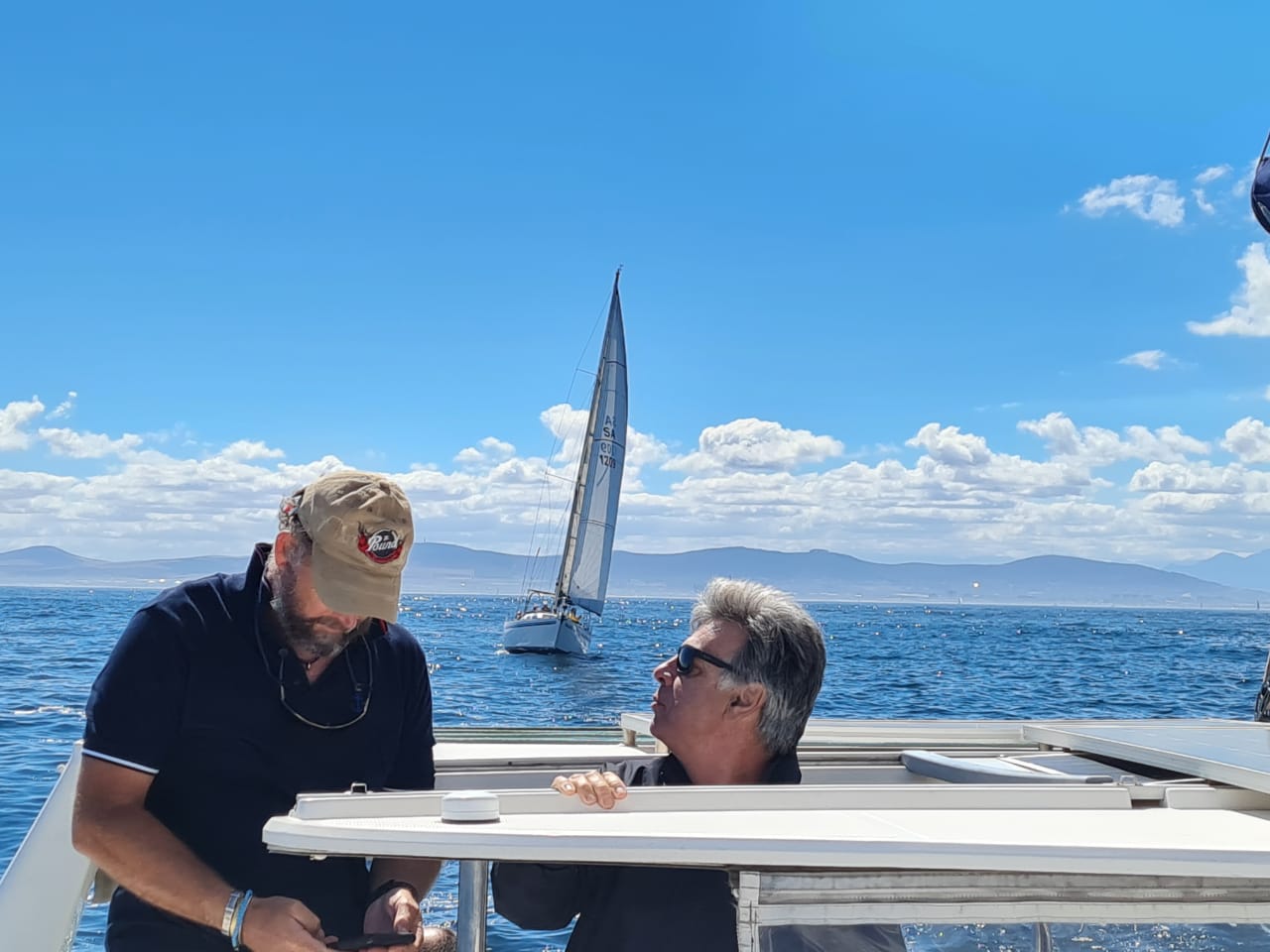 The start of the middle distance race was no different, except that with roughly ten minutes to go, there were a number of small boats hanging around with us near Granger Bay. Most including us, were still under motor. It didn’t take long, before one failed to notice us, while merrily hoisting their sail. Now for the life of me, I cannot see how that is remotely possible.  We are as wide as we are long, in fact all of a magnificent, majestic 45 feet. So I am beginning to think there must be some magic involved somewhere, an invisibility cloak possibly?

Thus, after the first couple of close calls, I have learnt to be on the lookout for smaller boats heading in our direction. “Skipper, there is a boat approaching off port, hoisting her main.”  Don’t worry, she is still a way off and is sure to see us, came the reply. A couple of minutes later it was very clear that the invisibility cloak was firmly wrapped around us and action had to be taken. We yelled, loudly. No, yelling is not ladylike, but neither is being broadsided by another boat. A loud and rather non polite discussion ensued, which was both unpleasant and unnecessary. So please, please watch out for giant, wide, very large, slow turning cats on the start line. In turn we will get maintenance to have a look at turning off that cloak!

Ah but the fun wasn’t over yet. In trying to keep well clear we had retreated to way behind the start line. Starting last appearing to be the most prudent strategy. And there we encountered a lovely little spectator boat, who gaily cautioned us to “stay clear, they are going to start a race up ahead”. Yes, we are actually racing as well, skipper replied with a straight face.

We may have been last over the line, but once sailing our cat is no slouch. Heading away from the coast we caught a good breeze, I tackled my starboard genoa winch with gusto  and soon we were flying. It didn’t take long before we found ourselves mid fleet. It was a great sail. We flew along, destination Llandudno, on a perfect sailing day. We even had Derbigum trailing us. There is some sort of rivalry involved here that I am not privy too, but a photo of them behind skipper was apparently a necessity. 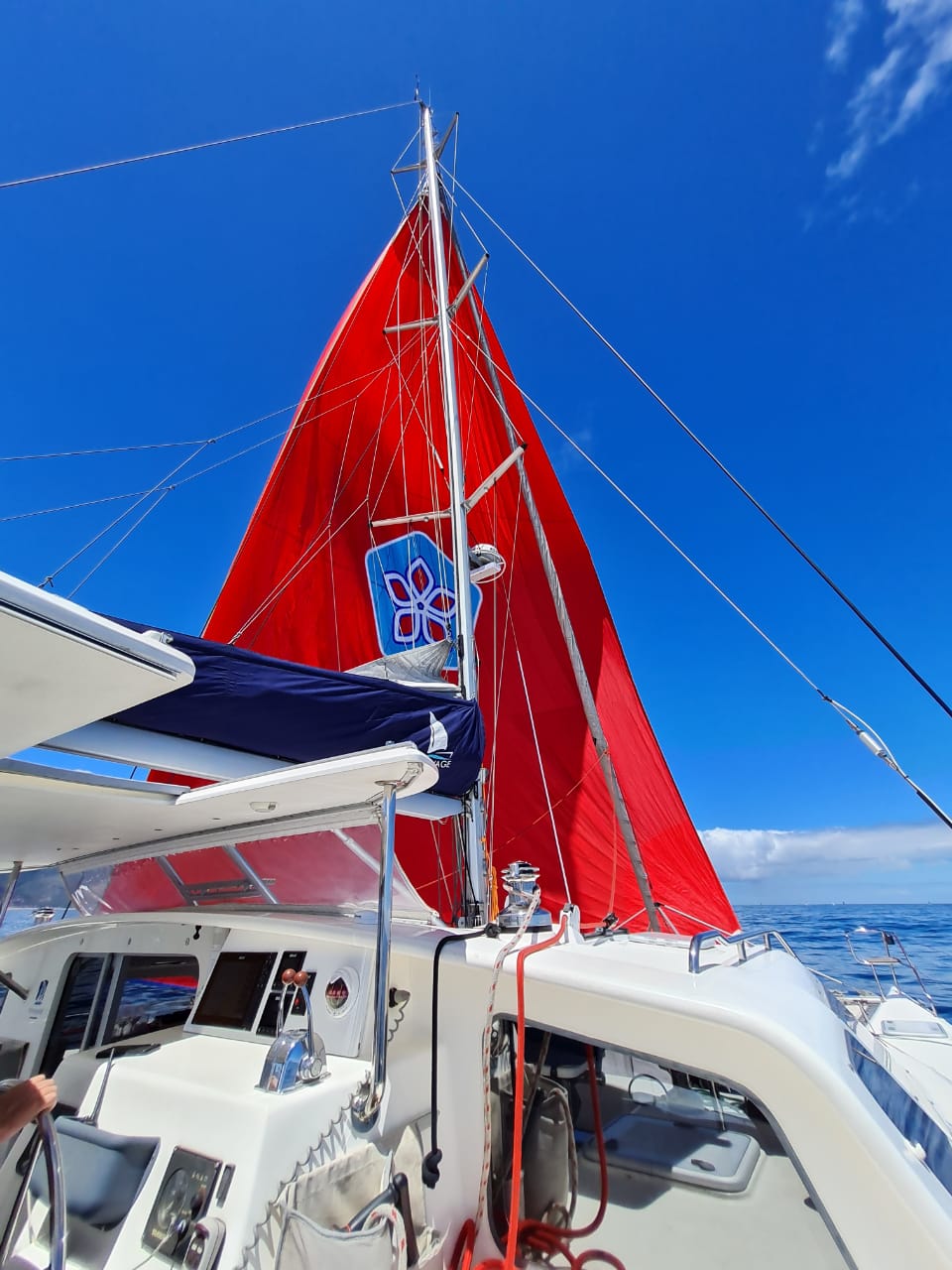 A slight drop in wind, no problem. A tack or two and we were back in the race.  Then the wind kept dropping. Ah but we actually do own a spinnaker I discovered. Up went a bright red bag, but the wind was now just enough to keep us moving forward. And there is nothing worse than the sight of a spinnaker filling and then luffing. Still, we are a determined bunch and we were not going to retire, even with several boats calling in.  Well, Derbigum hadn’t retired yet you see, but this may be pure speculation on my part.  However, once Derbigum called in to check whether we would like to join them for a braai at Clifton, our race was over.  Down came the spinnaker, the cat turned faster than she ever had before and we were motoring to Clifton.

Here I have to confess that I have never been for a braai off Clifton. A fact, I realised in hindsight, I should have kept to myself. Of course I offered such information freely when asked.  Skipper then informed me that given that I was a newbie to Clifton, the boat “tradition” required me to jump off the bow and swim to the stern. An interesting discussion around under garments and their suitability to swimming around a boat ensued, but in the end I deemed it far more prudent to go in clothes and all. Sailing shirt and leggings would do quite nicely thank you.

I did however request a slight change, as I had no intention of leaping off any bow. Apparently a graceful splash off the swim ladder was acceptable, but I would then have to swim around the entire boat. Now here I should probably admit that I grew up in the mountains and there is nothing colder than a mountain stream on a winter’s day.  Hence I do have a bit of an advantage when it comes to cold water. In I went off the swim ladder and started my swim, while simultaneously giving a running report on the temperature of the Atlantic.  According to me it was fairly pleasant.

This report may or may not have added extra incentive to skipper and one of the crew leaping off the bow. All I can say is that they did not share my thoughts on the water’s temperature and the only words that emanated was to suggest that I should rather swim through the middle of the boat to shorten my challenge. Now it may have been a tad cool, but there was no ways I was going to swim under a bobbing cat. So around I went, with a lovely little surf on the surge taking me back to the swim ladder.

It was at this point that I discovered I had no dry clothes and the towel on offer was a tad too short to wear as a dress. Thankfully, my foul weather salopette was still in my sailing bag.  Actually I think it was quite a fetching look. While we were swimming, the crew had fired up the barbecue and chef Bob was laying out a feast. I must say there is something very decadent about sitting around a barbecue, glass of rosé in hand, off Clifton after a race. We even had two lovely ladies in minimalist swimwear paddle up on a sub, offering to sell us ice creams.

The race may have been abandoned, but we still had a stunning sail to nowhere, with some wonderful tacking, a spinnaker hoist and even a swim and braai off Clifton.  Winning is nice, but in the end it is really about being on the water, being part of a team and simply having fun! Till next time.

Saturday 22nd July was our first club race scored on the ORC rating system. It was…