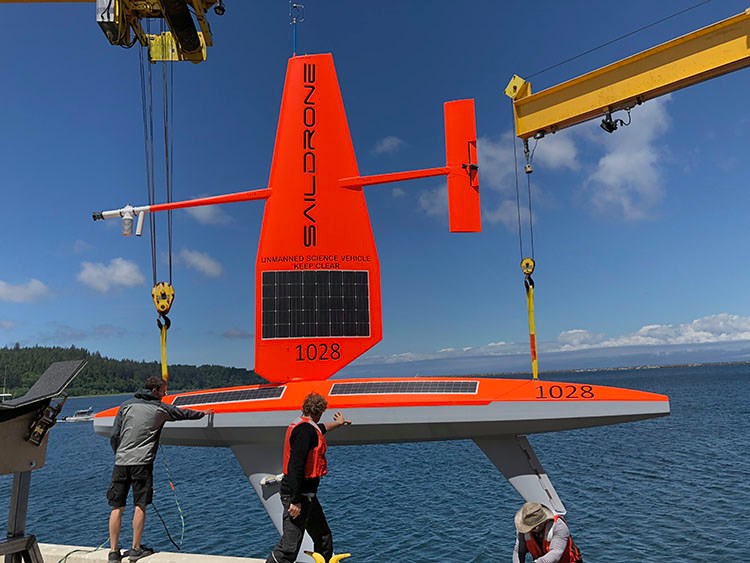 If you have been at the club recently you will have seen a rather strange device tied up in front of the deck. It is a Saildrone, which is an autonomous sailing drone used to gather data. It is 23 feet long and one recently became the first unmanned system to circumnavigate Antarctica. It sailed 22,000km, survived 50 foot waves and 80 knot winds and even collided with icebergs.
Follow this link (https://vimeo.com/351851778) to view some footage taken by its onboard camera in the Southern Ocean.
The Saildrone carries numerous sensors and records all sorts of data including air and sea temperature, wind speed, ocean currents, barometric pressure, CO2 levels and acidity. All of this data is helping scientists to better understand the southern ocean, a part of our planet where it is difficult to get data for obvious reasons. The drones are able to collect data on fish, depths and oil spills. They can also monitor illegal traffic around fish sanctuaries and track tagged fish.
The Antarctic trip was funded by Li Ka Shing and all the data from that mission has been made available for free to the global scientific community.
The Saildrone fleet are operated out of California and the son of one of our members, Boet Koopman, works for the company that operates them. They are busy building a fleet of 1000 of these drones.
There is a very slick Saildrone weather app you can download to your phone. – by Andrew Collins
Please share this:
Related Posts

Last Friday night's lucky winner was Mr Cameron Boustead, who was unfortunately not present to claim…

Lufthansa Twilight 003: Belting Them Out