Brick House is a stunning Valiant 40 that joined us at RCYC during lockdown for emergency repairs.  Owners Rebecca and Patrick Childress were circumnavigating the world, when the Covid-19 pandemic struck.  Initially the couple were moored at the Hout Bay Yacht Club, waiting for the world to reopen, when Brick House sprung a leak.  Seeing as RCYC’s hard was open, they sailed her around for a quick repair.  Sadly Patrick passed away from Covid-19 recently, while still in lockdown at the Club.

I caught up with Rebecca and her cat Coati to find out how she became the owner of one of the most popular blue water cruising boats ever built.  First a little bit of history.  Following on from the early 1970s where offshore cruisers had tons of teak and enormous undersides, came a revolutionary design by Nathan Rothman and Bob Perry.  Named the Valiant, it had a cut-away forefoot, modified fin keel with external lead and a skeg-hung rudder.  In essence a fast, comfortable, safe cruising yacht, capable of long-distance deepwater sailing. Between 1975 and 1979 Bill and Mary Black became the first sailors to circumnavigate on a Valiant 40, describing their trip as “safe” and “comfortable”.  In 1976 Francis Stokes finished a singlehanded transatlantic race on Moonshine, also a Valiant 40.  And in 1982-1983 Dan Byrne, completed the inaugural BOC Challenge singlehanded around-the-world race on Fantasy, the very first Valiant ever built.

Rebecca is an accomplished sailor, a licensed Ham radio operator, holds a 50 ton masters captain’s license, and has owned many boats ranging from a MacGregor 17′, a Catalina 27′, a Catalina 36′, to a Valiant 40’ named Yellow Rose.  “I was married by the time that I had the Catalina 36, and my then husband said “well you don’t know enough, we can’t go sailing with two incompetent people on a boat that can’t fall off waves.  We need a boat that can fall off waves.”  So I got a third job, I saved up some money and I started going to sailing schools.  Next, I went to offshore sailing schools, doing crossings to the Bahamas, just learning everything I could.  That was over the course of about ten years between saving and learning.

“Once I had all these different qualifications, I said to my husband “well we’ve got the boat, being Yellow Rose, got the money, got the experience, got the provisions, let’s go!”  And he said, “I don’t really have any interest.”  After fifteen years!  It’s like in traditional marriages where the guy wants to go sailing and the woman is praying that he would forget about it, well it was the opposite for us.”  Rebecca even took a trip from Newport to Bermuda with Offshore Passage Opportunities, incidentally skippered by Patrick, in an attempt to save her marriage, thinking that if she could just get the sailing bug out of her system, her marriage would survive.  Sadly it had the opposite effect. Despite being seasick most of the time, she absolutely loved it!  “I had hoped if I was seasick for the whole trip, I would lose my obsession to go sailing/cruising, and my marriage would surely be saved. But that wasn’t the case.  Since we went through a hurricane, all six of us bonded on that trip and we stayed in touch over the next couple of years.  Then when my marriage went totally kaput, Patrick and I got together.”

Despite having already circumnavigated many years before, Patrick was keen to go again, as long as it wasn’t on a boat named after a flower.  Hence Yellow Rose became Brick House.  So where did the new name come from?  Rebecca explains that it just depends who is asking. “If it is children then we tell them it’s the story of the three little pigs and the brick house still standing at the end.  If it’s adults, then we tell them that our love song was the Brick House by the Commodores.  It is also about how we were able to go sailing.  He was in construction and I was a real estate agent.  So we bought houses, fixed them up and sold them to make money for our trip.  We also worked our regular jobs really hard, saving money to go and then finally we set off.  Still, we did run out of money around year seven and stopped in Kwajalein in the Marshal Islands and worked for about a year and three months.  We built our kitty back up again and then continued on.”

Rebecca and Patrick are well known vloggers in the cruising world.  She explains that it was mostly down to Patrick though.  “It was really Patrick’s thing.  People are asking me when I am going to do another video and I don’t even know the first thing about editing a video.  I am still trying to figure out how to get a battery charger for his camera.  He did such a great job, learning it from nothing. I am going to try though.  Right now I am taking courses on the computer to figure out how to do it.” 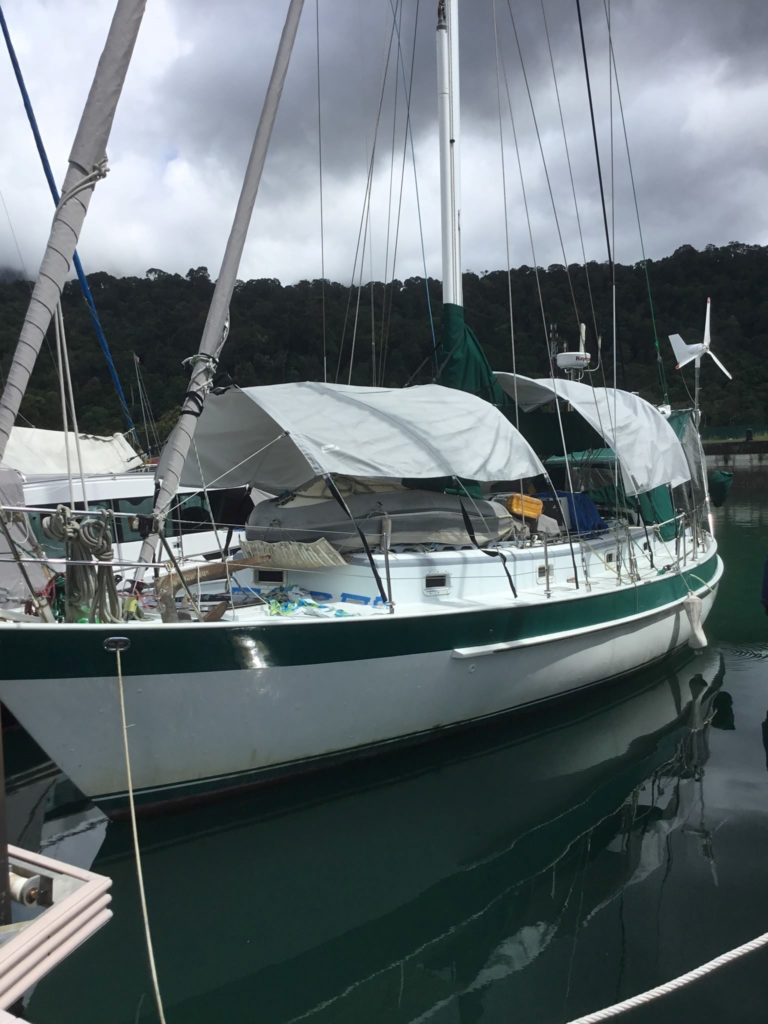 For now the future is still unclear with most of the world’s ports still firmly shut for foreign yachts.  “We were provisioned to leave.  We came here on an emergency repair and the next week we were hoping to get permission to leave.  I have gone from selling the boat here and taking a loss, to getting professional crew to finish the circumnavigation with me and then sell it in the US.  But it’s a lousy market at the moment.  You can’t sell a boat, you can’t even go anywhere on a boat right now.  I thought maybe I should try to get residency here and stay for a while.  I love the people here and I love this country.  I know it has its problems, but I have never met people, like the ones I have met here.  Here people go out of their way to extend their hand to you and it’s just a different place.  I want to have some of that in me too.

“At the same time I know that it’s not cheap to get residency here.  The thought of staying here is fine, but what about two years from now?  I like to move, I can’t get residency in every country I go to.  And I don’t want to go back to the US, to me it is just the end.  Even before I met Patrick, I worked so hard to do this.  I think I need some mature people to join me.  Men or women, they just need to be strong sailors as I am a strong cruiser, but not a strong sailor.  I think lockdown is actually good for me now, as it gives me time to think things through.  The boat was my home for years, before I met Patrick.  It’s a big change of life quite suddenly.  I feel Patrick next to me every single day just saying: “what are you waiting for, get on with it.” It makes you realise that life as you know it can change overnight and you should make the most of what you have.

Hi my name is Sithandiwe Mpangele. I am 17 years old doing grade 12. I…