Ladies who sail, by Liesl King. 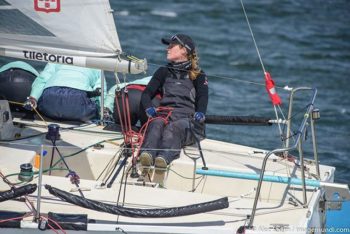 The Royal Cape Yacht Club has always had a healthy contingent of sailing ladies. In their heydays members such as Molly War and Jennifer Webb, and in more recent times we have the likes of Dominique Provoyeur, Jennifer Burger, Di Hutton-Squire, Belinda Haywood and Heidi Burger, to name but a few.

As the skipper of the only all-female entry in the 2019 RCYC Ladies Race, Heidi Burger has certainly been flying the flag for female sailors. I caught up with her to get an idea of what attracted her to sailing in the first place and to see why she is so passionate about attracting more women to the world of sailing.

Heidi started sailing Optimists at the age of 9 at Zeekoei Vlei Yacht Club and has loved the sport ever since. “I enjoy being outside, as well as the racing side of sailing, but most importantly the incredible community that comes with the sport,” she explains. “I started on Optimists, then moved on to sailing 420s with some bursts of 29er and laser sailing along the way. I still sail 420s whenever I can. While learning to sail dinghies, I had already started sailing larger sailboats like L26s and L34s.” 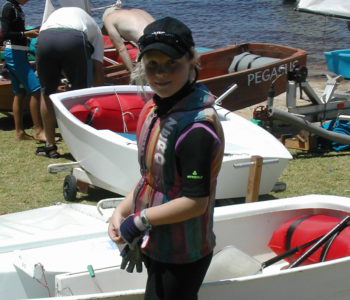 These days she can mostly be found either sailing her beloved 420 or crewing on the Cape 31 CuAl6. An interesting choice, as the Cape 31 is considered a very physical boat that requires an all-male crew to be competitive.  “While the Cape 31 might have been designed for a mostly male crew, we haven’t let it stop us from sailing these awesome boats,” says Heidi.  “Some jobs on the Cape 31 are definitely designed to be sailed by large males, but whenever I sail with an all-female crew, we just adapt the roles to suit us. For example, we’ll have someone sub in on the spinnaker drop line as soon as the first person taps out.”

This tactic certainly works, as despite being the only all-female boat, Heidi and her team finished 3rd on CuAl6 in the 2019 Ladies Race. Two years later they were back, taking line honours in one of the two races of the 2021 Ladies Race. So why are we not seeing more all-female teams? “Most of the current boat owners at RCYC are men and while you get some owners that are happy for other people to take their boats out without them, most owners (male or female) prefer being on their boat when somebody else borrows it,” she explains. “But while I love making a statement to prove that women are capable of running and sailing yachts completely on their own.  And to prove that we don’t only need to be put on boats as rail meat,  I do think the number of females in key positions competing in total, is more important than the number of all-female crews.”

Her 2019 Ladies Day entry of an all-female team sailing a Cape 31, certainly raised some eyebrows but Heidi took no notice. “I had a few comments from people saying that we weren’t strong enough, but I don’t think I listened very closely to them. I knew my crew’s ability and I knew what was required to sail a Cape 31.  I knew that we could handle it and perform. Luckily the owner knew we were capable as well and I didn’t have to convince him. I think sometimes people think that women will struggle to do the same jobs as men, but in reality, we are just doing the job in a different way.”

Women have been sailing for centuries. Born in 1777, Thurídur Einarsdóttir joined her father’s fishing crew at the age of 11 in order to become a sailor. Her exceptional skills as a skipper earned her a place in Icelandic maritime history as one of their greatest captains. So why in this day and age do we still have so few women sailors and what can be done to bring more ladies to the sport?  “I’d love to know that myself!” says Heidi. “Sailing has been a historically male sport for centuries and I think sometimes we can be impatient with progress. I’ve definitely seen the ratio of female to male sailors improve over the years and I’ve seen more women become involved in the sport.

“I think creating more inclusive environments at the yacht club is a start, “suggests Heidi. “A space, where women don’t get harassed and are respected, goes a long way to keep women in the sport. I hope that by running more ladies day regattas, we can start creating a space for women in the sport where they feel like they are part of the Club and valued at the Club.”

Heidi and her crew of ladies will definitely be on the start line of the next Ladies Race on the 28th of August, but first she will be taking part in her 8th Lipton Cup. “My first Lipton I skippered as a 16 year old with a bunch of my friends on a L26. I still remember having to pee in a bucket for the first time during that event and how mortified I was, as I was the only girl on the boat!

“In 2015, I started an all-female Lipton campaign where we competed as Team Tiletoria. The goal of the campaign was to promote females in racing and prove that women are just as capable at sailing. It was a successful four-year-long campaign where we competed in four Lipton Cups and I can confidently say that we made an impression on our sailing community. We weren’t just the “girls-just-want-to-have-fun” team, but a team to take seriously.” And she certainly won’t be the only lady on the start line this year. She will be joined on CuAl6 by Tammy Bailes and Marine LeBlond, while Dominique Provoyeur will be competing on Nemesis and Michelle Beale on the RCYC entry Vulcan. 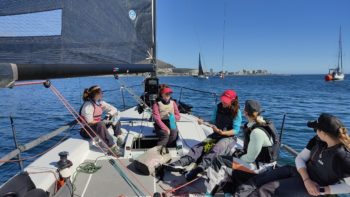 Heidi concludes by pointing out that we have a lot of very competent and brilliant female sailors at RCYC and that she hopes that in the coming years, we (men and women at our Club) can create a space where more female sailors feel welcome and thus nurture the next generation of people wanting to enjoy our sport.

Round Robben Island Race: Happy Days between a Rock and a Hard Place

Ahoy! Foggy overcast conditions greeted a fleet of 42 yachts before the start of the…

Last Friday night’s lucky winner was Mr Brian Robinson, who was unfortunately not present to…