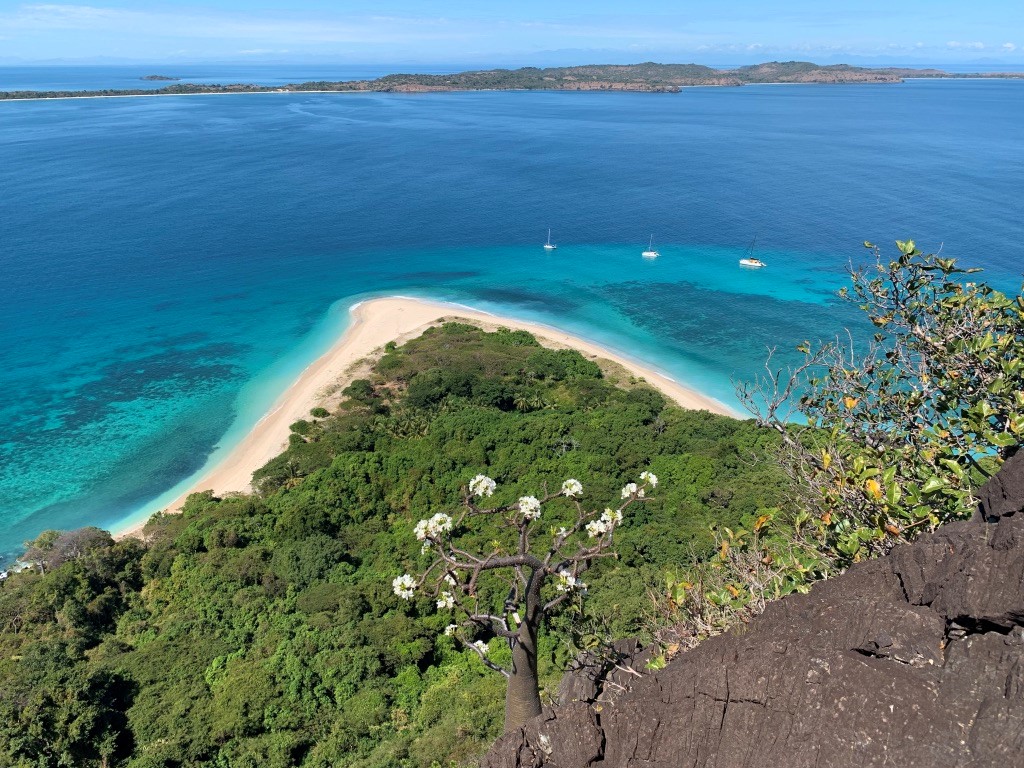 Matt was just ahead of me trying to find a route through the foliage that surrounded us.  “Dad it’s too thick. We can’t go this way”.  We were both drenched in sweat as the heat hung heavy.  Even though we were on a steep scree slope the tropical jungle hung on to the basalt black rocks a lot easier than we did.  The canopy halted the sunlight yet hung onto the heat, allowing it to become trapped under the spread leaves, baking the forest floor to the perfect temperature so that you could almost hear the flora growing.  We were about 60 metres up the near vertical side of a 300 metre high basalt plug on the island Nosy Ankarea.  The lower slopes were covered in the most delightful tropical jungle complete with a little grove of Baobabs.  It was a scouting mission to see if we could summit the plug so that Matt could fly his drone from above the island. 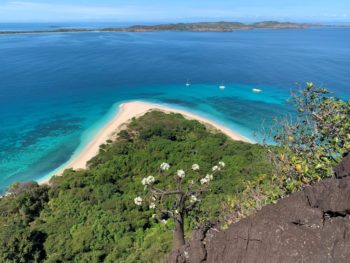 We had eyeballed a possible route to the flat topped summit from Amarula, deciding to follow a scree slope that promised less of an incline than the rest of the steep sided mesa.  It looked simple enough, tender ride to the beach, short walk through the jungle, negotiate the scree slope, follow a grass band up to a large ledge and then on to the summit via a small arête.  We guessed total expedition time would be around an hour.  Ah but how time flies when you are having fun!

I looked around me, trying to find a way through the thicket that surrounded us. Up and to the left I could see sunlight breaking through the canopy and dappling the jungle, the colours sharp and mesmerising.  The light appeared to be slow dancing as the branches moved imperceptibly, colours switching from mute and demure to vivid as they were sun touched.  As the beam filtered through, the leaves became a burnished emerald green.  The combination of dark impenetrable jungle, black rocks, stifling humidity and the sunlit emerald leaves made it look like Aladdin’s cave.  It was utterly quiet for a second as neither Matt or I could move, the jungle mirrored our silence and all I could hear was my laboured breathing.

“I think I can push through here Matt” I said as I started to move forward towards the lustrous sunlight beam.  I carefully untangled a ‘wag n bietjie’ bush that had wrapped itself round my leg and shuffled forward.  The sunlight seemed to dance mesmerisingly ahead of me, enticing me, framed by a spider’s web glistening as a warning. 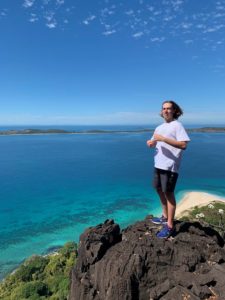 Matthew on the summit of Nosy Ankarea

Some time ago I lost the ability to be content.  Not in a single cataclysmic event, but rather over time.  It would seem that the rhythm of my past life was conducted by the act of survival only and this energy had no space for contentment.  There were never plateaus, just a continuous and sometimes overwhelming steepness to my existence.  This perception that consumed me, hyper focused my conscious world into a delineated single beat.  It was a rhythm that was not peaceful nor beautiful and it threatened the very things I loved most in my life.  Luckily, I skipped a beat and in so doing recognised things needed to change.

In my new life I have spent more time creating pauses in the music, stopping to reflect, take stock and appreciate.  I now look towards contentment rather than gratification, trying to re-learn how to sit still and do nothing.  As humans we love celebrating the ornate where in fact the detail is the accomplishment.  The notes make the tune, not the other way around.  My effort now is focused on recognising the lilts of life, the daily beats that have a uniqueness about them, a hint of magic, an elevated tune if you will.  These moments are thick around us all, the trick is to know that they are there and then to start learning to recognise them. It takes practice as we are so rehearsed to seeing the dark in life that we lose the ability to recognise the light.

This was one of those moments.

It had its own beauty.  I was on an adventure with my son, we were climbing a cliff on a remote forgotten island, waves washed ashore on a pristine white beach below us, the heat was baking, the sun painting the jungle in precious-stone hues and there was an absolute stillness.  My heart seemed to swell in that instant, I could feel a strange emotion fill me to the point that I felt I might cry. 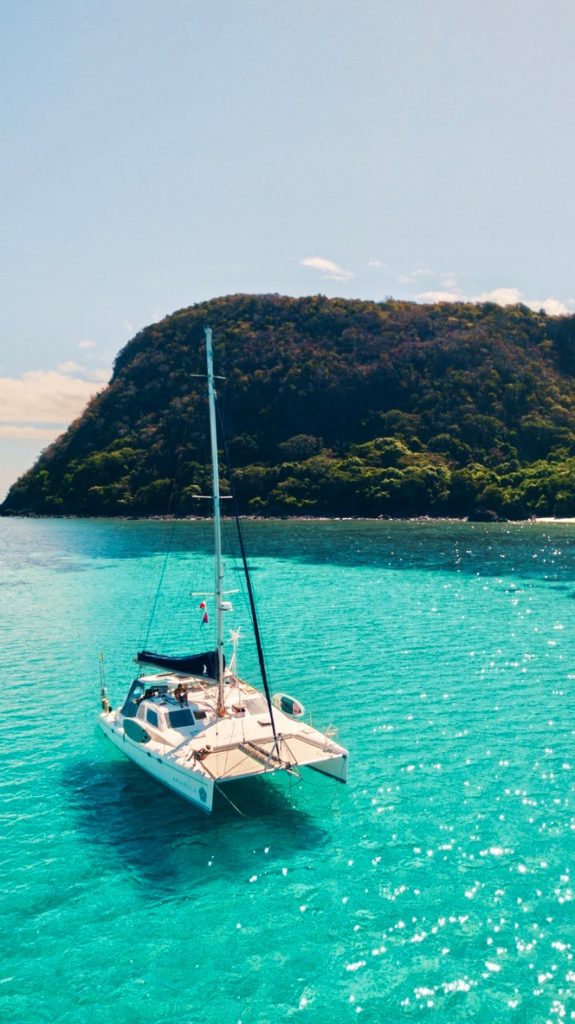 Amarula sits in the crystal clear water with coral behind us

Instead, I stepped forward, past the thorns and into the dappled light that surrounded a small tree whose branches were dressed with the painted emerald leaves.  I never saw a thing, never heard a thing, just felt the most incredible pain on my right forearm.  “Fuuuuck” flew out of my mouth as a debilitating intense short sharp stabbing pain traveled up my arm.  My brain scrambled, and my lungs expelled again “shit, fuck!”  I turned to get away and slid down the slope, trying to escape whatever it was that was inflicting itself on me.  Matt was laughing “Dad what’s going on…”  he responded as I swatted hopelessly at my arm and all around me, careening down the slope like a man possessed.

As instantly as it started the sharp pain ceased.  I grabbed a rock to stop my slide downwards and stretched my arm out to have a look.  There were several small raised bleeding marks on my arm.  I looked back at the silent tree, standing there innocent and sublime in its beauty.  I was a little embarrassed by my outburst and totally unsure of what had just happened.  “Excuse my language my boy.”

“That’s called a swearing tree Dad, it’s not your fault, the tree made you do it.”

I stared back at the swearing tree looking for an answer.  Hanging off one of its branches and hidden by shadow was the biggest hornets’ nest I had ever seen. It was surrounded by its buzzing, angry, recently disturbed inhabitants. “Bastards” I exclaimed.  “What” laughed Matt even harder now.  “Hornets my boy, little bloody hornet bastards.” 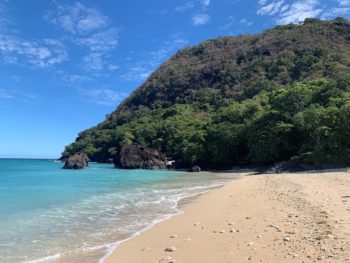 The emotion, the endorphins, the moment then just released itself in my being.  I started laughing, that stomach barrelling deep laugh that is released from the soul, from the point of your being, when all is synchronous and as it should be.  I was at once both completely and totally content.